Home Mediawatch Trent Alexander-Arnold not to blame after all… 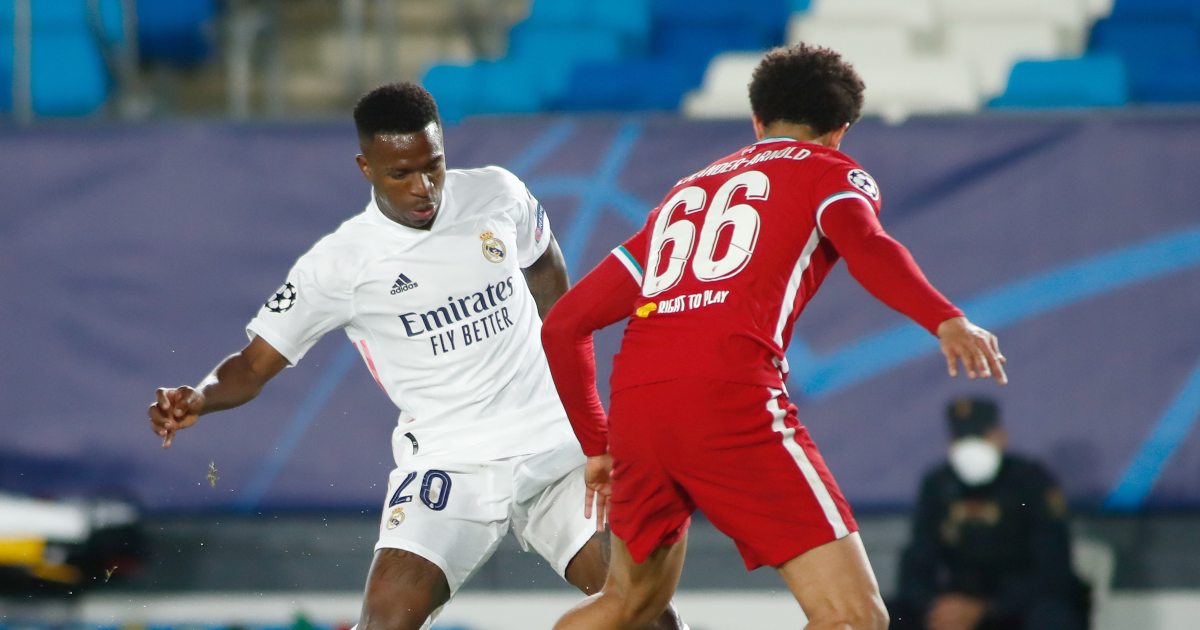 Trent Alexander-Arnold was rotten against Real Madrid, but it’s not really his fault…

Trent! The Musical!
“The problem for Trent is he’s set the bar so high in recent seasons that people expect it now” – Glen Johnson, Sky Sports News.

“He’ll bounce back but if you make half a mistake at this level you are going to get punished.”

It was slightly more than ‘half a mistake’. And it’s not the first time.

“Sometimes at England we’ve been limited for options but now to have four or five, with two real class right-backs, it’s good to watch them battle it out and to have that competition is healthy.

“Winning the race, for me, at the moment is Trent and Reece James.”

Thank you for your expert views, former Chelsea and Liverpool right-back Glen Johnson.

Murphy’s Law
Over to another former Liverpool player in Danny Murphy to talk about Trent Alexander-Arnold on talkSPORT:

“I feel for him a bit. I think he has been a victim of his own success. The standards he set as a young lad coming into this team was phenomenal. There was an inevitable dip going to happen.

“The two centre-halves behind him don’t have the pace and the athleticism to cover him going forward. The biggest thing for me is that Liverpool played at their best when they had Henderson, Fabinho and Wijnaldum. Henderson played so well on the right of that three. He played so well because he covered Trent so well. It’s glaringly obvious to me that when Jordan is not there that Trent gets isolated more.

“The other thing is that Salah doesn’t help him. Salah is a goalscorer – we know that – but he plays off the right-hand side. So when you’re looking at the isolation of Trent it is inevitable that he will get found out at times.”

So by our reckoning that’s Ozan Kabak, Nat Phillips, Naby Keita and Mo Salah all more responsible for Alexander-Arnold’s form than Alexander-Arnold himself. It can only be Liverpool.

Haal a fuss about nothing
Neil Custis was on ‘analysis’ duty for The Sun as Manchester City beat Borussia Dortmund and it’s always a good day for Mediawatch when Neil Custis is on ‘analysis’ duty. This time he spotted that Erling Haaland did not score for Dortmund so, well, ‘Er, that was not what we expected!’

‘AFTER a week when he was being hawked around Europe this was the night for Erling Haaland to show what he was made of.

‘Now, of course 49 goals from 50 games for Borussia Dortmund in the run-up to this match was evidence enough of the 20-year-old Leeds born star’s worth.’

Well yes. What fool would judge a player on one Champions League game against superior opposition when he has basically scored a goal per game for his club?

‘Last night, at the venue where he could very likely end up, things fell flat.

‘Not least when he went through one-on-one just after half-time in a bid to level things up and stuttered over his lines.’

We think we might have found the fool. But Custis is right; Haaland did fail to score with literally his only chance of the game against possibly the best team in Europe.

‘Admittedly, he did manage an assist for Marco Reus’ equaliser.’

The ‘admittedly’ is just delicious. Could he sound more annoyed? Getting an assist is still pretty important, Neil.

‘But it is nights like these that put the noughts on the end of transfer deals.’

If even one nought was put on the end of Haaland’s likely transfer fee this summer then he would cost upwards of £1,300,000,000. We conclude from this that some people don’t know how numbers work.

‘Gareth Bale became one of the best players in the world on the back of a defeat to Inter Milan.

‘But it was a stunning hat-trick on a big night, in a big stadium on a big occasion.’

A few things here. That was Bale’s first season in the Champions League; it announced his arrival on the world stage. It’s not remotely comparable to Haaland, who has now scored 20 goals in 15 Champions League games, including strikes against Liverpool and PSG. Haaland is already one of the best players in the world, despite him not scoring in the one game you watched.

Custis then goes merrily down the anti-hipster road of railing against the concept of the false nine.

‘Every team still needs that scorer, that poacher. City still need it despite their excellence everywhere else on the pitch.’

There’s no doubt that every team can be improved, but if there is an an argument for any team not needing a poacher it comes with Manchester City being just a few games away from an unprecedented quadruple of trophies.

Custis then describes Raheem Sterling as being a ‘strange exclusion’ despite him starting just one of City’s five previous games. The clues were there, fella.

‘You wonder sometimes if Pep Guardiola over-thinks it. You can’t question it or he gets a bit of a strop on.

‘But you are at home, you have Aguero, Jesus and Sterling on the bench.’

You do sometimes wonder if Guardiola over-thinks it, but not when he plays exactly the same XI that beat Borussia Mönchengladbach 2-0 at home just a few weeks ago.

‘You’d bet Dortmund were delighted. Because have no doubt, there are goals still left in Aguero. If not, Barcelona would not be 5-2 favourites to land the greatest free transfer in history.’

Stop us if you think this might be crazy, but we think Guardiola – who watches him in training every day – might be a little more informed about whether there are ‘goals still left in Aguero’, even if he chooses to ignore the fact that he has not scored in open play in over four hours of football in 2021.

Custis then goes down a massive rabbit-hole about the way City treat their legends, because apparently statues are not enough to show appreciation.

‘Makes you wonder if the boss wants to be the biggest name at the club.’

Does it? And this thought came to you right in the middle of a 2-1 win over Borussia Dortmund, did it? It turns out ‘analysis’ now means ‘write down all your random thoughts about the club you are watching until you reach your word count’. 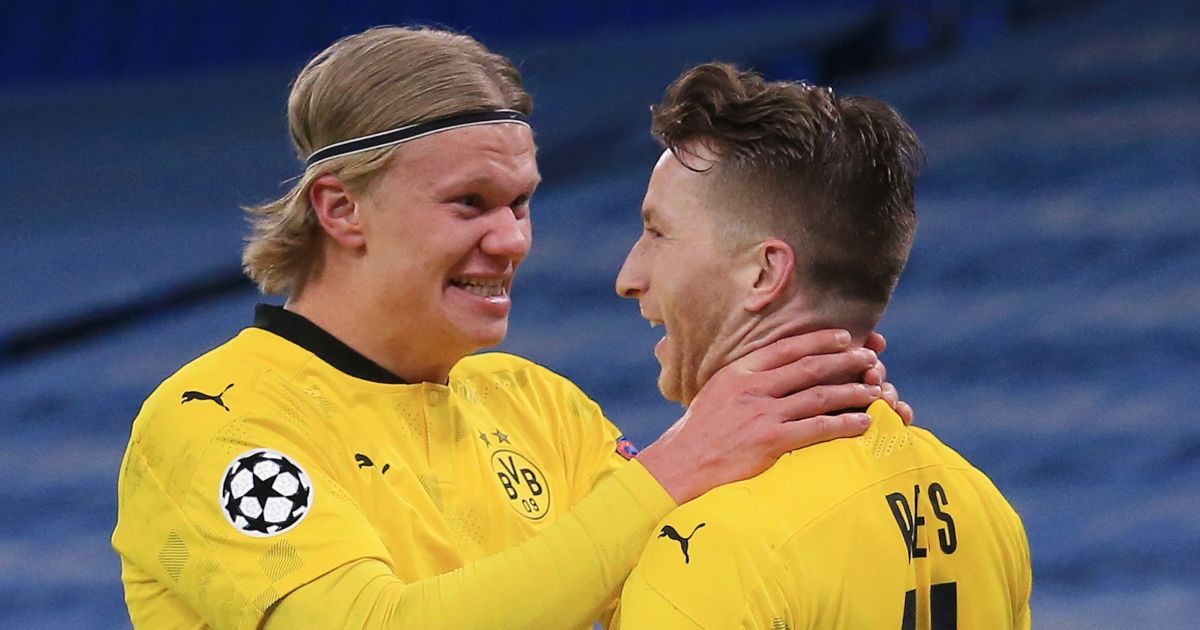 Haal going on
The Manchester Evening News know the draw of the name ‘Haaland’ though, with ‘Erling Haaland’s Man City romance has already begun after Phil Foden conversation’ their biggest story on Wednesday morning. Of course it is.

And what is this ‘Manchester United news and transfers LIVE Erling Haaland’?

‘Erling Haaland trains at Manchester United training ground ahead of Man City Champions League tie’, of course. So on Wednesday morning the LIVE Erling Haaland update is that he trained at The Cliff (along with the rest of the Borussia Dortmund squad) ahead of the game on Tuesday night.

The transfer is pretty much in the bag.

Dump truck
A personal bugbear of Mediawatch is this kind of nonsense:

Sorry, Daily Mirror, but that’s not how contracts work. They cannot ‘dump crock Coutinho’ as they are duty-bound to pay him until 2023 and he cannot actually be sold without his agreement. He’s not a kitten with mange.

Recommended reading of the day
Barney Ronay on Toni Kroos