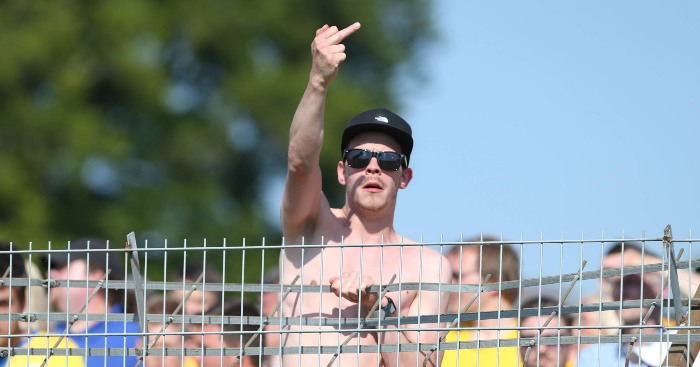 Have you noticed that the media is biased against your club? That you don’t get the credit you deserve? That you suffer undue criticism and never get any praise? Will you go on Twitter and abuse people who say anything critical about your club? Do you hate anyone saying anything negative about your club? Does it make you angry if they do? Do you think specific presenters, pundits, websites and papers hate your club and do you interpret everything written by them through that understanding? Do you think you are objective in your view of the club while everyone else is biased? Do you trust the club more than the media?

When we see it laid out in a stark list, it seems impossible to think that anyone could tick all those boxes, but of course some do, and they’re called tribal monsters. All clubs have them – possibly it is the same percentage of the fan base at each – and that means the biggest, most popular clubs have a lot, while more modestly followed sides have only a few.

When an author writes someone they know into a novel, it is said that the subject never recognises themselves, however accurate the description. As someone who has written 17 novels, I can confirm this is absolutely the case. Similarly, tribal monsters do not realise they are tribal monsters. Their unreasonable abuse is, to them, merely a very astute critique or richly deserved push back against an idiot.

Tribalism isn’t just passionately supporting a football club. It is an extreme mindset that has replaced open-mindedness and inclusivity with a sort of binary fascism where you and your club are right in everything it says and does and everyone else is wrong. It is the primary driver for football’s abuse culture, especially but not exclusively online.

Almost comically to non-believers, tribal monsters are manipulated by club owners and executives to promulgate their position on anything from ownership, to funding, to managerial choices. They know they can fill their brains with propaganda and send them out into the Twittersphere to do their job for them. We’ve seen plenty of examples of this in recent years, months and weeks.

But the true tribal sap doesn’t realise any of this and thinks they are the true supporter, will dismiss other more reasoned or nuanced fans as traitors to the faith, has somehow convinced themselves that anyone who doesn’t share their wholly blinkered outlook is bigoted and biased against them and must be attacked as such.

At some point all will inevitably excuse their horrible behaviour on the basis that their victim has, in some way, ‘disrespected the club’ as though it is an actual person and not a business likely owned by a distant, largely anonymous investment platform which frankly does not give a monkey’s chuff about the club as anything other than a financial asset. The club is not your mam.

That tribal monsters say they are ‘within our rights’ – another popular phrase in this culture – to fight back against even the smallest criticism with as much abuse as deemed necessary goes to show how blinkered they are to what they are and what they are doing.

But things are taking a new turn for the worse with club social media accounts being used to attack pundits who say something about the club that they don’t like thus actively, wilfully and deliberately drumming up hate. Football club’s social media should never become so-called ‘banter’ accounts, but too many are leaning that way, looking for perceived sleights or insults to fight, attacking press or pundits who have been critical. Football clubs are, or at least were, respectable important local civic institutions and should still be charged with behaving as such. They should never be an extension of Lad Bible. They have a responsibility to behave with respect and decency, not to appeal to the lowest common denominator, nor the most base of instincts.

Clubs should not be actively trying to wind up opposition fans, not trying to create an ‘us and them’ siege mentality. Not pretending that everyone is against the club and its fans. It is childish and not the behaviour of intelligent, responsible adults.

They must be more responsible and not indulge in encouraging or defending bullying. It should not need saying but pundits are people too and part of their job should not be to soak up horrendous abuse which clubs have actively encouraged from their most one-eyed followers.

That this goes on every minute of every hour of every day, even now in a pandemic, is little sort of appalling and yet it has become a normalised form of discourse. But it isn’t normal. It’s weird. And tribal monsters are weird. They probably need some sort of psychological help to identify why they’re behaving like this and how to go about being a nicer person.

The vast majority of football supporters are decent people who are repulsed by their own club’s tribal monsters. We must speak out against this most pernicious of cultures and tell our clubs that under no circumstances should they be doing anything to allow it to grow and flourish. It’s not funny, it’s not clever and it’s really not okay.