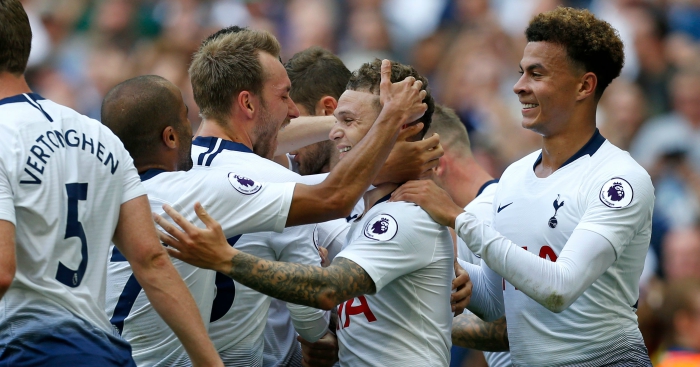 Tottenham defender Kieran Trippier wants to build on his outstanding World Cup and take his game to the next level.

Trippier, playing at right wing-back, was arguably England’s player of the tournament as Gareth Southgate’s men made it to the semi-finals in Russia before bowing out to Croatia.

It was against the Croatians that Trippier put the Three Lions ahead with a brilliant free-kick and he picked up for Spurs where he left off with another fine strike against Fulham.

Mauricio Pochettino’s side were labouring towards a 1-1 draw until Trippier, in his first game since the semi-final, sent a curling effort over the wall and into the corner, with Harry Kane then going on to seal the points in a 3-1 win.

That goal was just part of a fine display on the right and the 27-year-old is hoping to put his impressive summer to good use.

“I was delighted to play at the World Cup, it’s crazy what a year can do because I only made my debut for England last year and a year later I am playing in a World Cup,” he said.

“I learnt a lot about myself, it gave me a lot of confidence and I am happy to come back with more experience.

“Hopefully I can put that to good use by playing as many games as I can for Tottenham this season and helping the team out.”

The free-kick against Fulham, which came at a crucial time after Aleksandar Mitrovic had cancelled out Lucas Moura’s opener, was further out and on the other side to his World Cup effort, but he backed himself, even if his team-mates did not.

“Some of the boys saw me shaping up to take it and said, ‘Is it not a bit too far out?'” he added.

“That made me question my decision and think, ‘Is it a bit too far out?’ But the decision had already been made and I tried to block the keeper’s view as much as possible by telling the boys to get in the wall.

“I am happy it went in. I think it was a crucial time to get a goal, no matter who scored it, because they were getting on top of the game.

“They had scored and gained a lot of momentum, but I think my goal threw them a bit. It was a massive goal in terms of the game.

“Fulham are a very good side and pass it well. I think they will do really well this season.”