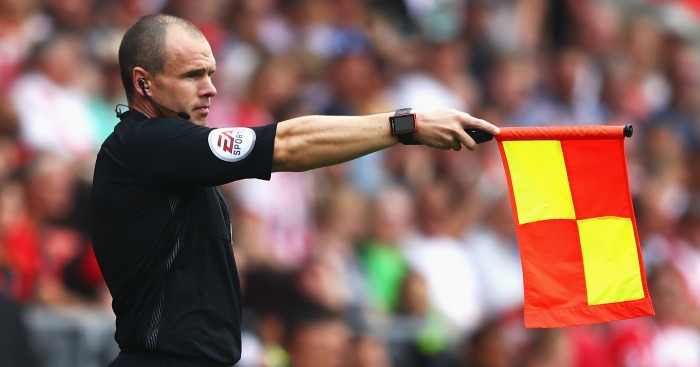 It’s time for Law 11 – Offside. With the possible exception of the penalty-kick, it’s the most important law in the book. That’s because almost every other law involving play is in some way intuitive. You can’t handle the ball unless you’re the keeper; you can’t push or kick someone; if the ball goes over the line it’s a goal. Just about all the other laws exist to serve those basic principles. Things like dimensions of the pitch and equipment are to some degree arbitrary, and the corner-kick serves to reward attacking play, but the rest of the law book is about delivering justice by the fundamental principles of the game.

Not so the offside law. It exists not to enforce natural justice, but to provide a balance between attack and defence that makes the game more enjoyable and a better test of more various skills. If we dropped the offside law tomorrow, it’d still be football – but not as we know it, captain. Offside makes football the game we want to watch.

So part of our frustration with offside is because it exists to serve us, not the players. Everyone’s got an opinion. And, as we discussed last time, crucial parts of the law are inherently unstable, because words require interpretation. So it’s potentially the most difficult problem in the laws.

As we noted last time, offside can be divided into two parts: 1) when you’re in an offside position; 2) when it matters enough to blow the whistle. The first part is much simpler – the law covers it quite precisely in 80 words – so we’ll take it first.

To be offside you have to be in the opponents’ half. Back in the 1970s, the North American Soccer League experimented with a 35-yard line, which not coincidentally prolonged the careers of aging European stars, but the half-way line has endured. A 2016 revision clarifies that the line itself is still in your half.

To be offside you also have to be nearer the goal-line than both the ball and the second-last opponent. For decades the law said nothing about which parts of the body had to be where, but now it’s clear. If ‘any part of the head, body, or feet’ is beyond the ball and the head/body/feet of the opponent, you’re in an offside position.

That ‘body’ is a bit odd, because everything that’s attached to you is part of the body (I hope), but it’s made clearer in the next clause, which says ‘the hands and arms of all players…are not considered’. If an ex-lawyer like me had been drafting the law, it’d say ‘are not considered as part of the body for purposes of this provision’, which would be more precise, and increase my fee because it would take longer to write. But you get the idea.

Again as noted last time, the rulemakers are getting more proactive, and there’s a nice little fine point added in 2016 to prove it. Hands and arms are not part of the body, because neither attackers nor defenders can legally play the ball with hands and arms. But what about goalkeepers, who can legally handle the ball? Should their hands and arms count?

Last year FIFA decided no. When goalkeepers are acting as attackers, this is obviously the right result, but most of the time they’re not, which makes the provision theoretically inconsistent. But it makes the law simpler and the linesmen’s job a lot easier, since in that split second they don’t have to judge whose arm is whose.

So far, so good. Now the hard part: when is the player offside gaining an improper advantage, improper enough to stop play and award the ball to the other side?

We know the player has to be offside at the moment a teammate plays or touches the ball. We also know the obvious cases: if the ball then comes near you and you play or even touch the ball, it’s a violation. This is called ‘interfering with play’, and you can google Brian Clough’s oft-quoted comment on that phrase.

The trickiest bit comes with the next set of provisions, ‘interfering with an opponent’. When this provision was added in 1995, FIFA left the phrase on its own. But in keeping with the movement to define things more closely, they’ve added several more specific provisions. Let’s see how well they’ve done.

First, you interfere with an opponent when you’re ‘clearly obstructing his line of vision’, which is amusing, because if you’re clearly obstructing, he can’t see clearly. But you can already spot the kind of problems we’re up against here: what does ‘clearly’ mean in this context? Does it mean ‘obviously’? Does it suggest a percentage of vision blockage?

The accompanying diagrams in the Practical Guidelines for Referees offer no help. The first, illustrating ‘clearly’ obstructing, has the attacker right in front of the keeper. But the second, illustrating no violation, has him somewhere around John O’Groats. There’s just too much middle ground.

The next provision is better: you’re interfering with an opponent by ‘challenging’ him for a ball. We sort of know what that means, and the diagrams here are sound and helpful. So that’s one for the rulemakers.

But how about the next? ‘Clearly attempting to play a ball which is close to him when this action impacts on an opponent.’ Look at all those words that need interpretation: ‘clearly’, ‘close’, ‘impacts’. And with the next we reach escape velocity: ‘making an obvious action which clearly impacts on the ability of an opponent to play the ball.’ We now need an ‘obvious’ action that ‘clearly’ ‘impacts’. For these last two cases there are no diagrams at all, which speaks volumes.

And yet the new provisions have their uses. Let’s look at an example that should be fresh in your memory:  Arsenal’s first goal against Chelsea in the 2017 FA Cup Final.

Forget whether Sanchez handled and concentrate on the offside. Ramsey, from an offside position, heads determinedly toward the ball, then stops just short. He’s ‘close’ to the ball, and his very presence must ‘impact’ Courtois, but he doesn’t ‘clearly attempt to play the ball’. Under the law as written, no offside. Without that last provision, we’d be unsure.

Whether the result is fair is another matter, and that’s why the offside law is so hard to get right. But although this particular section might be better drafted, I think all those obviouses and clearlys are designed to give the benefit of the doubt to the attacker. The ‘close’ to the ball does something similar. If I were a ref (and I wouldn’t do that job for all the Panini stickers in the world), I’d resolve all borderline cases that way, fair or not. And that may be all we can expect from a rule of this kind.

The law now goes on to special cases, some of which are fascinating. Here’s one that needs some close study.

‘A player in an offside position receiving the ball from an opponent who deliberately plays the ball (except from a deliberate save by any opponent) is not considered to have gained an advantage. A ‘save’ is when a player stops, or attempts to stop, a ball which is going into or very close to the goal with any part of the body except the hands/arms (unless the goalkeeper within the penalty area).’

We know what this is about: if you were offside when the shot was taken, you can’t play the ball directly from a save. Interestingly, the save can be by anyone on the defending team, so clearances off the line count. Note also the ‘very close’ provision, which allows the keeper latitude to go for the ball if he thinks he needs to.

But there’s an ambiguity here. What if it’s a cross, not a shot? An attacker beats a defender on the wing, zeroes in, and tries to send the ball across the six-yard box to his teammate, who happens to be a tiny bit offside. The ball is going to pass very close to the goal, but it’s clearly not going in. The keeper will naturally try to block the cross, but that’s a block, not a save. If he touches and the ball still gets to the second attacker, the letter of the law says offside violation. But does the spirit?

The other special case worth looking at involves players off the field of play. For defenders, if you’re off the pitch without permission, you’re on the goal line or touchline for the purposes of offside. That prevents defenders from stepping off the field of play to create an offside. Significantly, this part of the law doesn’t distinguish between leaving the field deliberately or accidentally. If you get forced off the field by a collision of some kind, you’re out of luck.

This law famously came into play during Euro 2008, when Ruud van Nistelrooy scored for Holland against Italy while Christian Panucci was off the field of play. If you’re not familiar with it, here’s the video…

Watch as Gigi Buffon goes for the free kick and collides with Panucci. The defender winds up in a heap behind the goal line, and as a result van Nistelrooy’s goal stands even though he has only the keeper in front of him.

Should the law be changed to allow for situations like this? I’d say no. It seems unfair to penalise the defence in this case, but in the hurly-burly of play it’s asking a lot of the ref to make a snap decision on a defender’s state of mind, particularly when players will sort of kind of just a little bit CHEAT at every opportunity.

But this law does raise an important question: if a defender is off the field for some time, say due to an injury, at what point does he stop facilitating attacks? This was first addressed in 2009: ‘until the next stoppage in play’. But that gave the attacking team a huge advantage, essentially a ‘get out of jail free’ card as long as they kept the ball in play. Seven years later the penny dropped, and the law now says ‘until the next stoppage in play or until the defending team has played the ball towards the halfway line and it is outside their penalty area’. So a Giorgio Chiellini clearance (5.4 per 90 minutes with Juventus last year) should do the job.

We’re almost done, but one more fine point. What if it’s not a defender but an attacker who’s off the pitch? Pretty much the same: he’s ruled as being on the goal line or touchline for the purposes of offside until the next phase of play, as defined above.

But note that means a very slight difference. If a defender is on the goal line, an attacker can’t be beyond him. But an attacker can be standing on the goal line and still be onside, if he’s level with two defenders who are also on the goal line. Yes, it won’t happen very often, but what’s the purpose of a series like this if not to run down all the obscure and nearly-impossible possibilities?

Next week, the last big law: Law 12 – Fouls and Misconduct.