Home Everton Trying to understand what the f*** Juventus are doing… 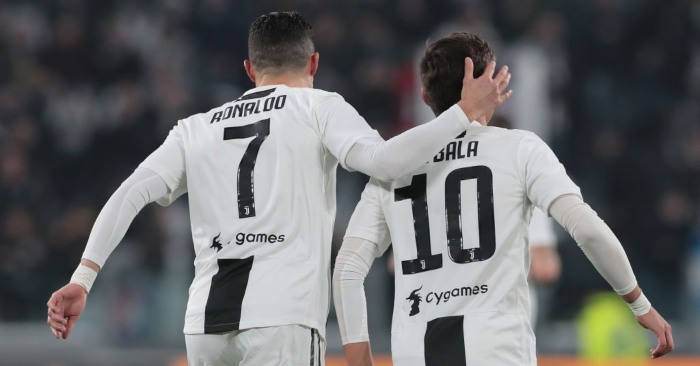 Lionel Messi’s international debut lasted less than a minute. Seconds after coming on as a substitute against Hungary in August 2005, the 18-year-old Messi was red-carded for an elbow. Paulo Dybala’s first start for Argentina lasted longer, but it too ended in dismissal as he saw a second yellow card in first-half stoppage-time against Uruguay.

It’s a neat little parallel which, for a time, was used to bind the two together. Two diminutive Argentinians, two left-footers, two international careers which began in tears. Ultimately, Dybala was no Messi, but Juventus remain in possession of one of the most coveted forwards in European football. Or they will be until they sell him to Manchester United, something which they seem oddly keen to do.

It fits a curious pattern. The Dybala deal is expected to be announced soon, with Romelu Lukaku moving in the other direction, and at the same time – or very shortly after – Moise Kean will become an Everton player, potentially with the provision of a buy-back clause. If the gossip columns are to be believed, Juve will also lose Joao Cancelo to Manchester City and Daniele Rugani to Arsenal before the transfer window shuts.

What is this? Fabio Paratici has a deserved reputation as one of the smartest technical directors in the game – he brought Antonio Conte to the club, signed Andrea Pirlo on a free-transfer, and snagged Arturo Vidal on a meagre fee from Bayer Leverkusen – and yet now he’s overseeing the quick sale of the generation entrusted with maintaining Juventus’ monopoly of Serie A.

Some of these movements have been necessary. Luca Pellegrini has joined from Roma and he will compete with Alex Sandro for a starting place. In the centre of defence, Genoa’s Cristian Romero and Sassuolo’s Merih Demiral have been signed to understudy that trio of veterans and, given his fee, Mathijs de Ligt has presumably been bought to start immediately.

In midfield, fresh blood has been needed for some time and Adrien Rabiot and Aaron Ramsey having signed on free transfers. They’re expected to move into the space vacated by Blaise Matuidi and Sami Khedira, each of whom are the wrong side of 30 and will most likely have new clubs in the coming weeks.

What’s interesting, though, is that even without the bigger name sales which are expected to go ahead (Dybala, Cancelo, Kean), Juventus have already managed to recoup nearly £100m this summer. Leonardo Spinazzolo has moved to Roma, while Emil Audero and Stefano Sturaro have gone to Sampdoria and Genoa respectively. Paratici has done an effective job of paying for his remodelling by trading away redundant parts, seemingly removing the need to give up these more precious components.

And that upheaval is concerning. If Juventus were Roma or Napoli or any of the other sides they have separated from the Serie A title, perhaps that gamble would be easier to rationalise. After all, big deficits demand big solutions. As it is though, with a new manager arriving – who has never won a league championship – they appear to be putting their own dominance voluntarily at risk. Squads age, they certainly need to be kept fresh and hungry, but there’s a thin line between evolution and revolution and Juventus appear to be straying over it.

And, in attack at least, doing so for the sake of Cristiano Ronaldo. Dybala’s exit was predicted by Adam Digby back in June. Speaking to Sky Sports News, he said that his departure was being forced by the need to accommodate Ronaldo. Dybala most often played on the right of Juventus’ front three after the Portuguese’s arrival, often to the detriment of his own game, and it was that lack of form – combined with Dybala’s preference for a central role – which has made this situation inevitable.

Now, Lukaku is being pursued for his apparent suitability as a foil. To create that dynamic, both Dybala and Kean are being sacrificed, which is to show a lot of faith in a 34-year-old Ronaldo. And in Lukaku, whose goalscoring credentials have never been under more scrutiny. One wonders, also, how much longevity there would be to that kind of partnership. Even Ronaldo has a finite lifespan and Lukaku, despite still being just 26, is older than his years suggest. International games included, he has already made over 500 appearances in his career, which – given his body shape and playing style – is a huge physical burden.

So what’s the thinking? That Juve’s obsession with the European Cup has led them to take drastic action in an attempt to harness Ronaldo’s waning power? That’s hopelessly rash if so. Because of his and Lukaku’s expiration dates, of course, but also because so many of this new side are likely to be playing together for the first time. And under Sarri, whose football comes with a learning curve and who, most recently, has shown an inability to communicate his message well or work productively with ego.

Ronaldo’s self-esteem has its own gravity, of course. Rabiot also has an extremely high opinion of himself, one which outweighs his achievements in the game. Lukaku isn’t particularly submissive, either. Cumulatively, there are a lot of moving parts in this situation – many players who are being expected to adapt to Sarri’s circuit-based tactics immediately and several who will likely pollute the atmosphere if that doesn’t happen.

Is it really realistic to expect a reconfigured Juventus to become an immediate Champions League contender? If the answer is no, then what is the justification in trading away the club’s long-term future to pay for this short-term lunge?