Home All The News Tuchel and Dortmund ‘go their separate ways’ 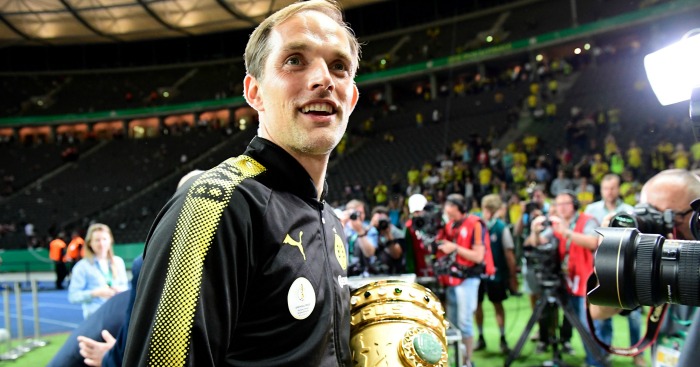 Thomas Tuchel has left his position as coach of Borussia Dortmund, the club have announced.

The 43-year-old, who led Dortmund to victory in the DFB-Pokal final only three days ago, has parted company with the club after two seasons in charge.

Dortmund said in a statement the decision to “go their separate ways with immediate effect” was made at a meeting on Tuesday between chief executive Hans-Joachim Watzke, sporting director Michael Zorc, Tuchel and his agent.

“We’d like to thank Thomas Tuchel and his coaching team for their successful work at BVB, which culminated in the DFB-Pokal win over Eintracht Frankfurt in Berlin on Saturday,” read the statement.

“We’d like to wish Thomas all the best in his career.”

Dortmund said they would not comment on the reasons behind the split from Tuchel, who still had a year left on his contract.

They said it was the “result of a long process”.

The club added: “BVB attaches great importance to the fact that the cause of the separation had absolutely nothing to do with a disagreement between the two parties.

“The well-being of Borussia Dortmund, to which they were much more than only sporting success, will always be more important than individuals and possible differences between them.”

Relations between Tuchel and the club’s hierarchy, in particular Watzke, have appeared openly strained since the bomb attack on the Dortmund coach ahead of their Champions League game with Monaco last month.

The match in Dortmund was postponed and played the following day, with Tuchel making no secret of his anger at the decision to play the match so soon after the incident, in which his defender Marc Bartra was injured.

An angry Tuchel said at the time the decision, about which he said his team was not once consulted, left “a very bad feeling”.

UEFA bore then brunt of Tuchel’s fury, but it said Dortmund had agreed to the rearrangement of the game. The implication was Dortmund’s bosses had not run the decision by the team.

Tuchel was appointed as Jurgen Klopp’s successor at the Westfalenstadion for the start of the 2015/16 season. He led the club to second place in the Bundesliga last term and third this, although they have not been able to provide a real challenge to a dominant Bayern Munich.

Saturday’s 2-1 cup final win was Tuchel’s first – and only – trophy.

The loss of key players has not helped, though, with Mats Hummels, Ilkay Gundogan and Henrikh Mkhitaryan all departing last summer

The highly-rated boss, who earlier this season was suggested as a possible successor to Arsene Wenger at Arsenal, should the Frenchman leave, will not be short of offers, though. Pep Guardiola is reported to be an admirer.

“I am thankful for two beautiful, eventful and exciting years. It’s a shame that it doesn’t continue,” Tuchel said on Twitter.

“Thanks to the fans, the team, the staff and everyone who has supported us. I wish BVB all the best.”