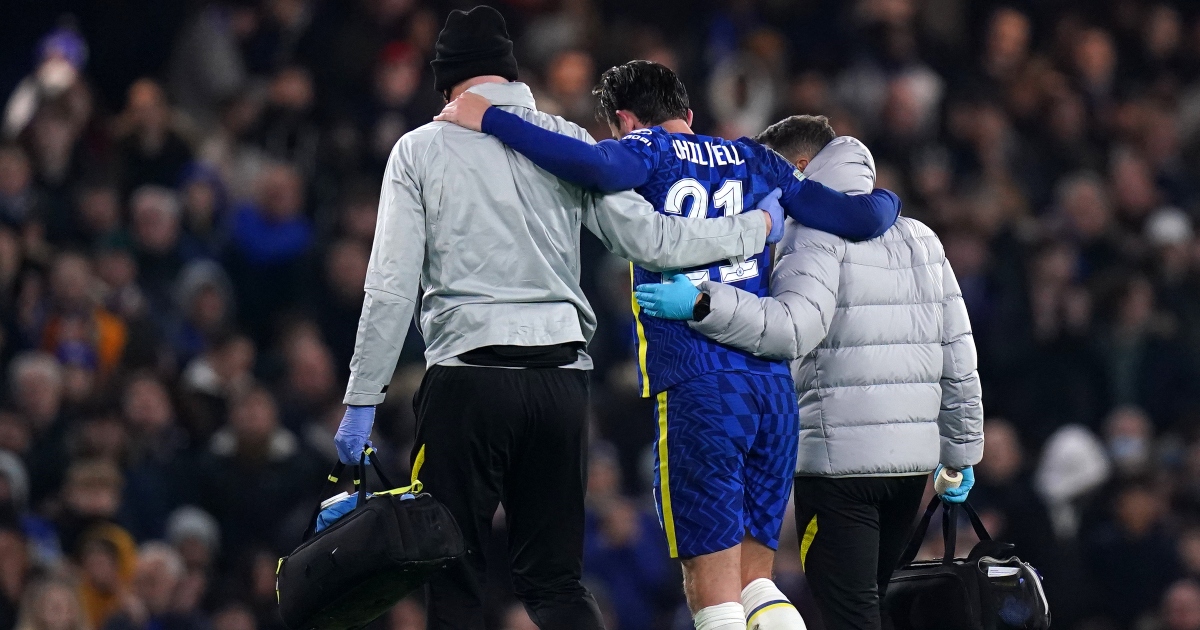 Chelsea boss Thomas Tuchel is hopeful Ben Chilwell’s ACL injury is not as bad as initially thought and he may be able to return in just six weeks time.

The 24-year-old Chilwell had just hit top form after a frustrating start to the campaign, and will be a big miss for the Blues – but possibly not a long-term absentee.

“Ben has a partial injury of his ACL and the decision is to treat it conservatively,” said Tuchel.

“And the next six weeks will tell the story actually if he makes it and if he will be fully available after the six weeks, or if he needs surgery after that.

“Right now I only care about the six weeks, we are very positive because the first reaction of his body is very positive.

“Hopefully it stays like this so now the full focus of everybody is on the next six weeks, to try to bring him back to play. It’s a very responsible decision, so there’s no rush, no pressure.”

Marcos Alonso will now step into the frontline as Chelsea’s premier fit left wing-back, but the Blues also have the likes of Callum Hudson-Odoi who has impressed in the deeper wide berths.

Negative news on Chilwell in the coming weeks could see the Blues either dip into the transfer market or even recall wing-backs like Ian Maatsen from his loan at Coventry.

Before all that though the Blues are determined to give Chilwell every chance to fight back to fitness to star again in the current campaign.

It’s time to hear from Thomas Tuchel ahead of #CHEMCU this weekend! 🎙 https://t.co/K7WSEWhgH9

Chelsea’s German boss Tuchel revealed Chilwell is maintaining an upbeat outlook despite his injury blow, given initial physical reactions to the problem have been positive.

“The next weeks will determine the direction. Right now, this is what we have. There is never a good moment for big injuries, and injuries in general.

“This for him personally is a very bad moment, because he was so good and so full of confidence, he was a huge part of our performances and victories in recent weeks. It’s a shame and very sad.

“But he’s actually in the moment very positive, because his body reacted very positively to the first treatments and to the injury.

“So after a while you have to refocus, and focus on the positive things. And that’s now the next weeks to do everything possible he can to come back and help us on the pitch.”

Premier League leaders Chelsea will host Manchester United at Stamford Bridge on Sunday, with N’Golo Kante likely to miss out through a minor knee issue.

France midfielder Kante could require just one week to be back to fitness.

“N’Golo twisted his knee a little bit against Juventus, and feels quite better since the game but seems like he will be out for some days,” said Tuchel. “It’s a matter of days, one week maybe.

“We still have a little bit of hopes but it will be almost a miracle if he makes it, so we think about a week.”

Romelu Lukaku has shaken off a niggling ankle problem, but the Belgium striker remains short of match sharpness.

“The possibility that he starts is not very high, because we can’t be sure what happens in between matches.

“We have to find the balance between giving him minutes and being absolutely competitive with the guys who start.”