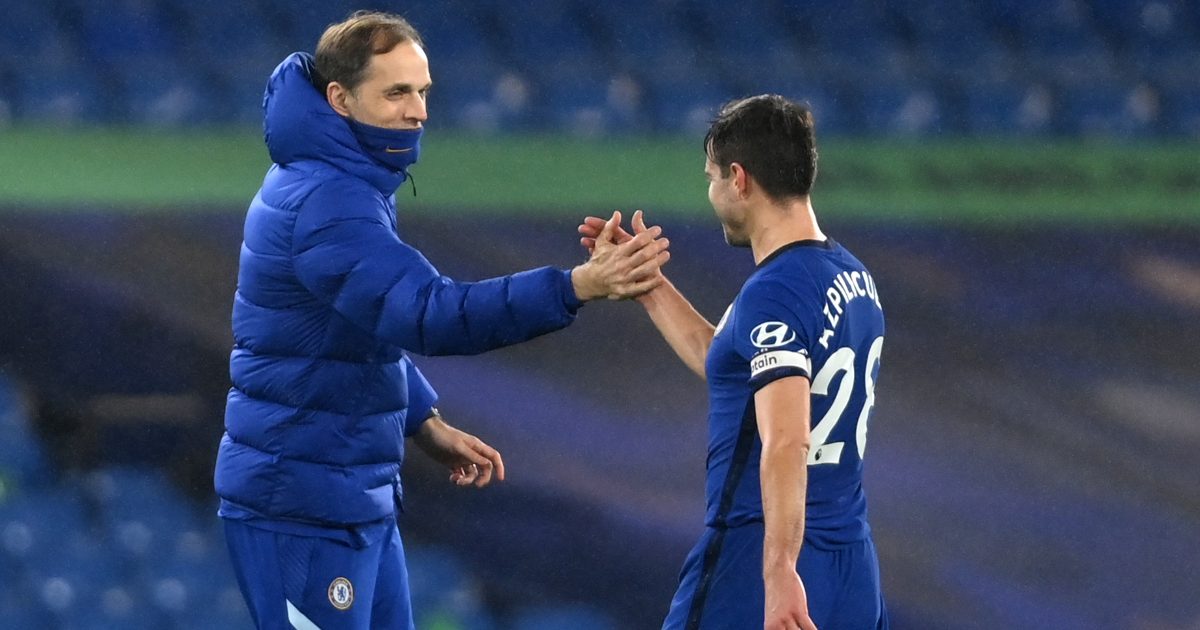 Thomas Tuchel has been full of praise for Chelsea captain Cezar Azpilicueta as he has been “key” to them reaching two finals.

Chelsea will take on Manchester City at the Etihad Stadium on Saturday in a dress rehearsal for the Champions League final.

Pep Guardiola’s men can win the Premier League title with victory over fourth-placed Chelsea this weekend however, ensuring neither side can take the encounter lightly.

Chelsea swept past Real Madrid 2-0 on Wednesday and 3-1 on aggregate to book that Champions League showpiece meeting with City, with Azpilicueta again starring for the Blues.

Azpilicueta has been fully rejuvenated by Tuchel’s January arrival at Stamford Bridge, and now the German has hailed the 31-year-old’s pivotal role in west London.

Asked what impact Azpilicueta has had on Chelsea’s run to twin finals, Tuchel replied: “He’s a huge, huge factor; a key factor and a key player for me at this club.

“He, for me, expresses everything that I think is typical for Chelsea: he’s a fighter, he’s a team player, he does not accept limits, he’s always available, a top, top professional and at the same time a very nice guy.

“It’s deep within him to be a team player, he’s very self-aware, very self-reflective and it’s a pure pleasure to have him in the group.

“As a captain he’s a true leader, in his personal way that suits his characteristics.

“And we’re very happy that he plays all the time because he deserves to play all the time.

“He’s a key factor, with his mentality, mindset and his ambition.”

Mateo Kovacic will miss the weekend’s Manchester City trip as he continues to battle a hamstring problem, and remains doubtful for the home clash with Arsenal on May 12.

But Tuchel still hopes to have the Croatia midfielder back in time for the FA Cup final, against Leicester on May 15.

“Kova is out unfortunately still; we hope to bring him back maybe for Arsenal and hopefully for Wembley,” said Tuchel.

“It will be tight for Arsenal, but for tomorrow he’s for sure out. And everybody else I think is available.”

But Tuchel does not expect that encounter, or Saturday’s Premier League clash to have any bearing on the Champions League final.

Asked if Chelsea could lay down another marker with a big result this weekend, Tuchel replied: “I’m not so sure, the possibility they can become champions if they win against us will not lower their ambitions and determination.

“They have one more day to recover, they don’t have to travel, and that gives them a bit of the upper hand.

“Because we saw how crucial that can be these days when they arrived in Wembley for the semi-final, because we had one more day, two games in London and they had to travel from Dortmund I think and then again to London for this game.

“I could feel it on the sideline that that gave us the upper hand. So we have to deal with it.

“I think the final in Istanbul will be pretty unique no matter the score tomorrow, no matter if we win, they win or if we draw.

“I think both teams will reflect enough that this one game in football and this special game in Istanbul can turn any result around that is the outcome tomorrow.”