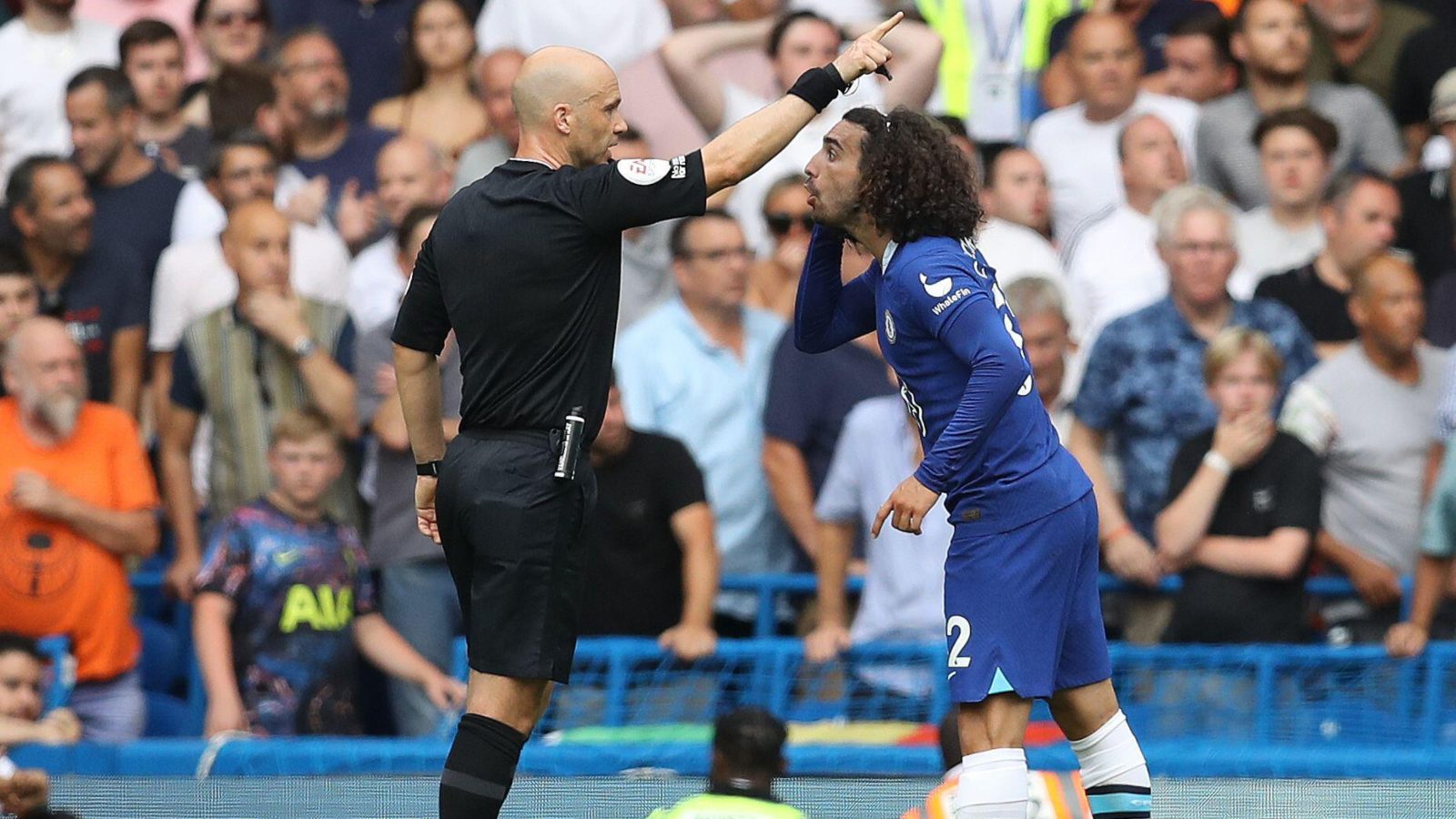 Thomas Tuchel believes “it would be better” for Anthony Taylor not to referee Chelsea again after the fiery 2-2 London derby draw at Stamford Bridge.

Chelsea boss Tuchel and Spurs manager Antonio Conte were sent off at full-time for their second clash, with the coaches squaring up to each other amid a niggling handshake.

Tuchel and Conte were both booked during the match in a major dugout melee after Pierre-Emile Hojbjerg’s goal, with Chelsea incensed that Kai Havertz was not awarded a free-kick in the build-up.

Harry Kane buried an added-time header to snatch a draw, after Christian Romero had avoided any censure for pulling Marc Cucurella’s hair.

A VAR check ruled out a red card for Romero’s hair pull, but Chelsea were not even awarded a free-kick. And from the next corner, Kane headed in to steal the draw.

Chelsea fans have long claimed an agenda from Taylor against the Blues, and Tuchel knew full well he would draw the wrath of the FA upon himself with his comments in response.

“But honestly we also have VAR, to help make the right decisions. Since when can players have their hair pulled, since when is that?

“But we have people at VAR who check this, and then you see it. And then what?

“And how can this not be a free-kick, and then a red card? How?

“This does not even have to do with the referee in this case.

“If he does not see something that’s why we have people to check if this is a decisive error or not.”

When asked again about Chelsea supporters’ concerns about Taylor’s officiating, Tuchel continued: “I don’t think that just some of the fans think that: I can assure you that the whole dressing room of us, every person thinks that.

“Not only the fans. You know the players, they know what’s going on when they are on the pitch. They know it.”

Asked if the players are worried when Taylor is in charge, Tuchel added: “Yeah, of course.”

And when it was put to him that he will most likely face a touchline ban for next weekend’s Premier League trip to Leeds, Tuchel said: “So, good! I cannot coach but the referee can whistle the next game.”

Kalidou Koulibaly’s fine volley from Cucurella’s corner had Chelsea in command and leading 1-0 at half-time.

Hojbjerg struck back for Tottenham, sparking the first coaches clash on the touchline.

Chelsea settled again however and Reece James fired the Blues back into the lead from Raheem Sterling’s pass.

Kane ensured honours ended even amid a turbulent, engaging and controversial contest however, leaving Tuchel furious with both goals.

“I cannot understand how the first goal is not offside,” said Tuchel.

“And I cannot understand how players can pull other’s hair and stay on the pitch.

“This is for me without any explanation and I don’t want to accept any.

“I have no words for it, I’m curious what the explanation is for that. Both goals should not stand and we should win.

“It cannot happen when we have VAR on this level, when goals are allowed that aren’t goals. This is the frustration, this is unacceptable.”

Both Tuchel and Conte moved to laugh off their two confrontations, especially the full-time handshake that led to their red cards.

“I don’t have any problem, and I’m sure he will not have either,” said Tuchel.

“We both fought for our teams, and it happens.

“It’s so close here, such an intense match. Both dugouts are very, very close.

Asked if Tuchel enjoyed the clash overall, Tuchel said: “Yes, and I think he enjoyed it as well, it was nothing bad.

“It’s Premier League football and the two managers got involved today, because both of us were fighting for our teams.

“Nobody got insulted, nobody got hurt; there was no fist fight or anything.

“It boils up but nothing bad. Today it was part of the game.”

“Honestly the referee showed me a red card but he didn’t understand the dynamic of what happened,” said Conte.

“It’s OK, I have to accept it but this is not a big problem.

“If there is a problem the problem is between me and the other coach.

“I think that what happened, we did enjoy.

“Next time I will pay more attention, just shake the hand and solve the problem. I’ll stay on my bench, he’ll stay on his bench.

“And no problem about this. It would be a pity if for this situation we miss the next game.”