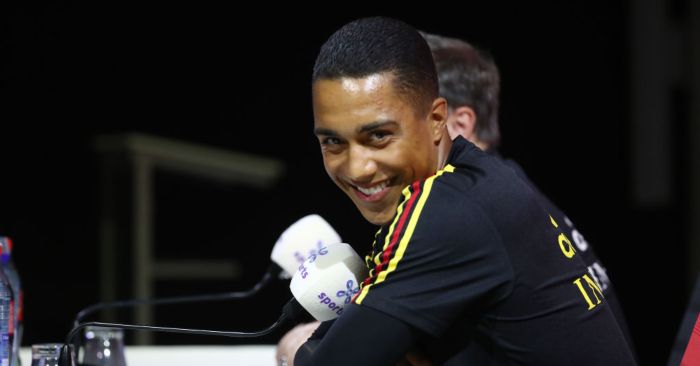 Were David Ornstein to tell everyone to jump before he delivered his latest transfer update, Arsenal fans would momentarily stop scrambling around for memes to ask how high. Had James Pearce claimed that the grass at Melwood had spontaneously turned red, Liverpool supporters would nod sagely, accept it as fact and explain that it was simply because This Means More. If John Percy reported that the Midlands was under siege from an alien master race, Aston Villa, Leicester, Nottingham Forest, Stoke and West Brom would unite to fight in his honour. Phil Hay could suggest the Aurora Borealis was visible at this time of year, at this time of day, in this part of the country, localised entirely within Elland Road, and Leeds fans would flock from far and wide to witness its glory without a second thought.

Some people engender trust, earning enough faith over time to have others hang on their every word. So when Kristof Terreur comes bearing Belgian gifts, his message can be taken as gospel.

‘Tielemans was offered to Spurs, but they had other priorities,’ he said on Monday evening. ‘There were informal chats between Man United and agent about him as a possible replacement for Paul Pogba, but they never made an offer. No priority either. Leicester were the only one that really went for him.’

And it is that last nugget that forces something of a double take. In a world where transfer fees have become both irrelevant and ridiculous, it seems unfathomable that a 22-year-old with extensive World Cup, Champions League and Europa League experience, a former teenage captain who has taken like a particularly talented duck to typically choppy Premier League waters, could have but one suitor.

Perhaps his heart was set. Maybe Tielemans was so entranced by Brendan Rodgers and his philosophy that he would not have had eyes for anyone else. Five months at the King Power Stadium was enough for the midfielder to realise “something special” was brewing at Leicester, the land where the improbable became possible. If he quite justifiably deemed it “an exciting thing to be a part of”, would everyone else have been wasting their time pursuing someone in a happily arranged marriage?

But it is difficult to comprehend the idea that no team seemed to object to this wedding. Tottenham’s ‘other priorities’ were fair; Tanguy Ndombele was demanded by Mauricio Pochettino and supplied by Daniel Levy. For United’s interest to extend no further than ‘informal chats’ – and for Arsenal to not even enter the race at all – is wilful neglect on their parts. A club that finished three and four places behind them last season, and have genuine aspirations and the ability to close that gap, should not be able to make such ambitious, thrilling and unopposed club-record moves.

Both have other targets: Harry Maguire, Wilfried Zaha and Sean Longstaff among them. Both also have restrictions, either self-imposed like United’s young and British transfer throwback or as enforced as Arsenal’s meagre budget. Yet when both are being linked with the very same underwhelming midfielders in yet another underwhelming week, it feels like the biggest wasted opportunity of the summer so far.

Tielemans could yet flounder as he did at Monaco, his form in the first half of this year the exception to a rule of struggles outside Anderlecht. But if he thrives, expect Ornstein and Terreur to be bombarded with demands for updates as he is pursued for at least twice as much as Leicester signed him.