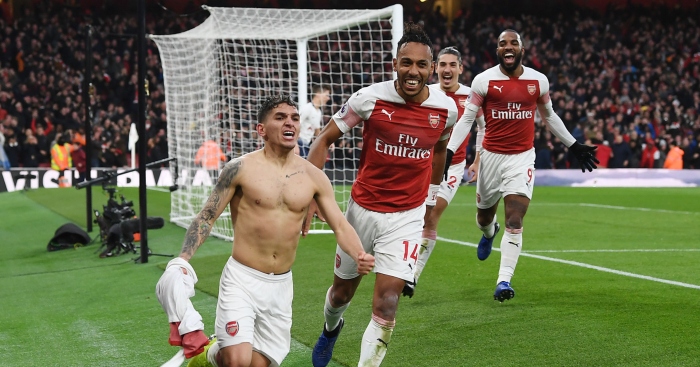 I’m proud to say that no less than ten of this week’s XI are making their first appearance of the season. The name of the one repeater won’t surprise you too much, but I was kind of surprised that one of the ten was making his first appearance. A 4-4-2:

Goalkeeper: Sergio Rico (Fulham)
You have to be good if you’re the keeper for Fulham, and Rico has been improving every week since replacing Marcus Bettinelli. Against Chelsea he showed his stuff with a variety of confident saves: coming out on the wing to narrow the angle, kicking out a point-blank shot, diving to his right on a deflection, and more. He always seems to try to avoid leaving a rebound, a very useful skill indeed. Joe Hart was a bit more spectacular on his line, and might have made the list had he not watched as Palace’s first went in. If you don’t think he was at fault there, put him in ahead of Rico. Lukasz Fabianski was rarely tested on shots, but commanded his area superbly.

Speaking of commanding, Alex Wylie is the go-to stats boffin here, and his rankings show that none other than Petr Cech is the best this year at coming for crosses. Fabianski, Jonas Lössl, Ederson and Asmir Begovic rank fairly high, Kepa and Hugo Lloris fairly low. Hart makes few mistakes, but is the least aggressive of all Premier League keepers at coming for crosses.

Right-back: Ricardo Pereira (Leicester City)
It’s hard to express how thoroughly Watford dominated the second half at the King Power. But here’s a stat that’ll help: Pereira, who you may note is not a central defender, had 12 clearances in the second half alone. Under that kind of onslaught he couldn’t be letter-perfect, and twice attackers got a bit behind him. But basically he just got in the way of everything he saw, and was one of the big reasons the Hornets had few good chances despite the domination. He usually looks more comfortable in attack than defence, so a very encouraging performance. Also nearly notched an assist, but Demarai Gray hit the post.

Centre-half: Bruno Ecuele Manga (Cardiff City)
Although he’s usually at right-back, against Wolves was on the right of a three, and looks much more natural there. Completely shut down Hélder Costa, who as a result departed shortly after the hour. Special citation for stopping Adama Traoré in an open field with only the keeper behind him. Clearly tired in the final minutes, but in a thin week did enough to top all candidates. It’s only marginally relevant, but here’s the stat of the season: Cardiff City have seven assists, six of which belong to defenders. Ecuele Manga has one, Sol Bamba one, Joe Bennett one, Sean Morrison three (!)

Centre-half: Willy Boly (Wolverhampton Wanderers)
Willy Boly is very good in the air, and that’s a nice thing to be when you play Cardiff City. Remember when Callum Paterson set a record by winning 23 aerial duels in one match? Against Boly, he lost seven of eight. The Frenchman won 15 out of 17 on the evening, adding some deft interventions and useful passing. Most unfortunately, two of only three times he wasn’t spot on (once ball-watching, once negligent positioning) were in sequences leading to the Cardiff goals. But both times a lot had to happen afterwards for the ball to get in the net. He deserves his spot.

Elsewhere, Yerry Mina is looking more and more like what the doctor ordered. A little inconsistent against Liverpool, but he’s super strong and plenty mobile. At the moment I think he comes out of the back line a bit too often. But I’d love him on my team.

Whisper it quietly…Yerry Mina has the minerals, to be the best centre half we've ever seen play for Everton Football Club. #EFC

Left-back: Patrick van Aanholt (Crystal Palace)
Had the complete freedom of Burnley’s right side, and took plenty advantage. His shooting was a bit wayward, but his passing was outstanding, and only a last-ditch Charlie Taylor block denied him an assist. Made more passes than anyone on the pitch, including a fair few long ones, and still finished with 89.1% completion. Didn’t do anything spectacular in defence, but Aaron Lennon and Johan Berg Gudmundsson were nearly invisible. You can only beat what’s in front of you, and he did.

An excellent weekend at this position. Equally worthy was Sead Kolasinač, who’ll play against a diamond any day, thank you. Uncontainable on attack, only occasionally tested on defence (and did okay). Aaron Cresswell also belonged, mostly for excellent defence against Watford, and a cross for a would-be assist that missed Marko Arnautovic by a millimetre. Had to leave with an injury before the hour, but if he’d kept it up for a full match, would have nabbed the spot. He and Kolasinač both lose out on the newbie tiebreaker.

Elsewhere, Charlie Daniels had a brilliant first half, holding off Raheem Sterling and combining with Ryan Fraser in attack. But Raheem and the rest of the Citizens were too much after the interval. Lucas Digne continues his good play for Everton, and figures to set a record for honourable mentions in this column.

Central Midfielder: Lucas Torreira (Arsenal)
Our one repeater. A quietly effective match and the clinching goal. He’s such a tidy player: very little wasted movement, heads straight to the ball, rarely misses a tackle (79.4% success, second only to Idrissa Gana at his position). He’s also comfortable in possession and passes effectively to both wings. Will occasionally pick up a yellow card, but that’s to be expected. Just a fine footballer, and he showed the full range of his talents against Spurs. He might be better than Eric Dier.

Central Midfielder: Ki Sung-yeung (Newcastle United)
That guy anchoring the midfield for Newcastle couldn’t have been Fernandinho, because he had too much hair. But that was the only way you could tell the difference. Ki has always been a good passer, but I can’t ever recall that kind of precision and variety. He also joined the attack more than usual. For me, his best performance ever. I’m a Jonjo Shelvey booster, but it’ll be hard to dislodge the Brazilian South Korean after that. Elsewhere, Mario Lemina shook off the Paul Pogba virus without needing the NHS. As we’ve noted before, Southampton’s best player.

For a rarity, there were no outstanding attacking midfielder performances. James Maddison came the closest, with a fine goal and some decent work on the counter-attack, but Watford had so much possession that he couldn’t influence the game as per usual. Max Meyer had his first strong outing for Crystal Palace, coming off the wing to be the fulcrum in attack, helping to control midfield. He also made the run that froze Joe Hart and led to the opening goal.

Elsewhere, Nathan Redmond was a terror against Manchester United, but he was really playing as a striker, and (see below) there was too much quality to crash the list at that spot. Stuart Armstrong looks the part more and more. Aaron Ramsey had a fantastic second half, but Torreira and Ki were strong over 90.

Winger: Solly March (Brighton & Hove Albion)
With José Izquierdo, Anthony Knockaert and now Alireza Jahanbakhsh on the squad, March has been fighting for his place since the Seagulls were promoted. Last season he started only about half the games, but this year, aided by an injury to Pascal Gross, he’s been in the line-up 13 out of 14 times. Against Huddersfield he was Brighton’s liveliest player before the sending off, then against 10 men put on a crossing exhibition that Gross himself would have been proud of. Two assists, lots of panic in the area besides. Unlike Izquierdo and Knockaert, steady rather than spectacular, but often worth watching.

Winger: Marc Albrighton (Leicester City)
In its own way, as amazing a performance as you’ll see. Leicester scored against Watford early, then played mostly on the counter-attack. That meant Albrighton frequently had to send long balls to a streaking Jamie Vardy or James Maddison. He put it absolutely on the money five times. He got only one assist, on Maddison’s super volley, and was lucky to get that, because Adrian Mariappa got a touch somewhere in the sequence. But it was quite the show. Add in a liberal share of interventions, and you’re reminded that he is, in fact, a title-winner. Personal note: for many years I used to think his name was Chris Albrighton. No idea why. (I also used to call Paul Konchesky ‘Ed,’ but that’s another story.)

Elsewhere, Felipe Anderson was a regular danger on the counter against Newcastle, and wrapped up the show with a cool finish through the keeper’s legs. Could have had an assist as well when he put Marko Arnautovic through. Leroy Sané and Raheem Sterling had their moments for City, but then when don’t they?

Striker: Pierre-Emerick Aubameyang (Arsenal)
There were plenty of sceptics when he was signed- a talented but erratic striker, soon to be 29? But goodness, what a player. He dribbles, he passes, he stretches the defence, he’ll make a tackle or two if you need it. And he scores. Oh, how he scores. Against Spurs he gave us a truly world-class finish and a neat psych-out penalty. Plus, that reverse pass for Torreira made me want to fly Emirates, visit Rwanda, and root for Gabon in the next AFCON. Somehow this is his first appearance on the list this season.

Striker: Javier Hernández (West Ham United)
Declan Rice and Mark Noble as a two in midfield? Surely they’d be outmanned. And they were: although Rice had a decent match, Newcastle pretty much controlled the middle. But at the other end, Hernández, with the help of Marko Arnautovic, showed why you play two strikers. Playing mostly on the counter-attack, they bewildered the Magpie defence, and although Chicharito missed one fairly easy chance, he scored a couple that lesser mortals might have spurned. I don’t know how often Manuel Pellegrini will play 4-4-2, but home to Cardiff tomorrow wouldn’t be a bad time to go again.

Don’t forget Marcus Rashford’s two assists and dynamic play when Manchester United actually looked like they cared. A special word for Wilfried Zaha, who jinked and cut and dummied all over the pitch, with only a St. Peter from Joe Hart to show for his efforts.

As usual, no Team of the Midweek, because even I can’t watch that many matches that fast without sleep. See you after next weekend, when Chelsea and Manchester City will surely have 16 Conclusions and hopefully many list-makers.