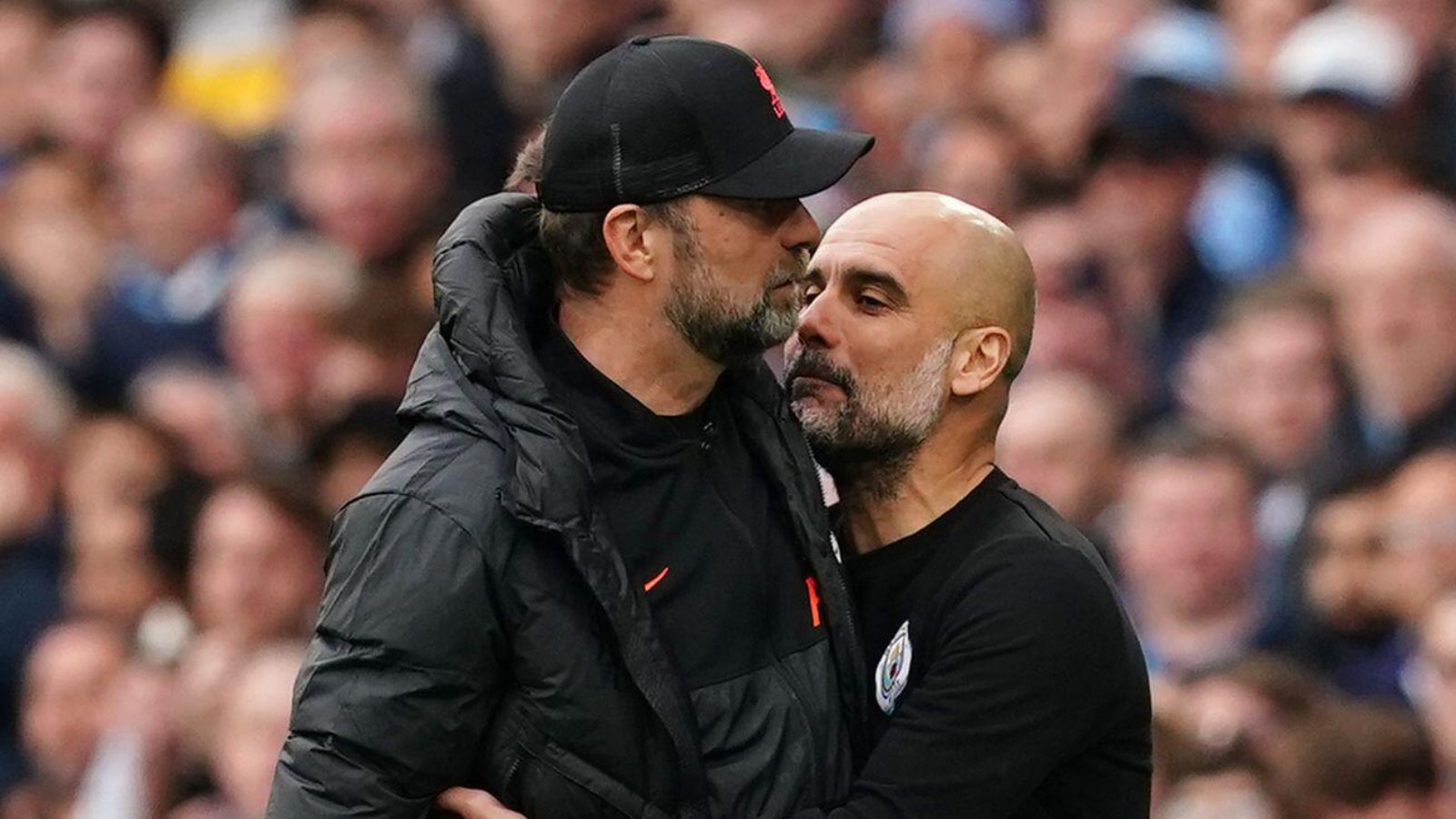 It may have been a decisive weekend in the Premier League title race, with Manchester City taking a three-point and four-goal lead with three matches remaining after Liverpool’s 1-1 draw against Tottenham was followed by a 5-0 romp against Newcastle.

We’re not interested in any of that, though. No. That’s football, and we leave that to the experts whenever we can. And by experts we mean literally anybody else who has ever seen a game of football. We know nothing about football; this has long been established.

What interests us is that both managers used their media duties to behave like social media sh*tposters. Now that’s something we do know about.

Both managers were magnificently pissy in the aftermath to their very different results, and it was not the first time for either. It was impossible to avoid the conclusion that while neither Jurgen Klopp nor Pep Guardiola are officially on Twitter, they are both absolutely definitely on Twitter. A shiny penny, by the way, to the first reader who can point us towards plausible contenders for either man’s burner.

And it’s not even the first time for either of them, so it can’t just be put down to the unique stress of this particular title race. Pep Guardiola has literally used the word ‘Fraudiola’ in a press conference before, while this piece we wrote two years ago about Klopp could and would have been recycled with just a few quick find-and-replaces to bring it right up to date.

So just to be absolutely clear, we love that both these hugely powerful and successful men are behaving in this way. We’d like to think we also wouldn’t let success stop us being so petty in the deeply unlikely event of that ever happening. We did move out of the basement, though.

We should also say that a manager or player using his press conference to behave in this spectacularly childish fashion is infinitely preferable to the bland taking of positives or the taking of each game as it comes or any old sh*t whatsoever about referees or VAR or anything else. If managers are going to deflect in press conferences, and there are good reasons why they do, this is 100% the correct way to do it.

But there is something that does need saying about this week’s specific press conference sh*tpostings. And that is this: they were both talking bollocks, weren’t they? Like, they weren’t just provocative attention-grabbers, but wildly inaccurate. Maybe that makes them even better at it. Christ, are they better than sh*tposting than us as well? That hardly seems fair.

Still, though. Let’s start with Klopp and his annoyance that Spurs had come to Anfield and played in precisely the manner that he should have expected, not least because Antonio Conte spent his own pre-match presser explaining that was precisely how they would play.

Even if you subscribe to some Wengerian order of intrinsic footballing ‘worth’, it wouldn’t apply to the way Spurs played at Anfield. They defended in numbers and made a huge number of blocks, sure, but they were also brave – as Conte had said they would have to be – in attempting to play out from the back through Liverpool’s formidable press to create chances of their own.

This negative Spurs should really have scored in the dying minutes when their most defensive midfielder found himself unmarked six yards from goal. It would have been no smash and grab, either. Spurs ceded possession but that was a plan. They made good use of the ball when they had it, and essentially did to Liverpool what Brighton had done to them a couple of weeks earlier (minus the late winner). It was a very good, very clever performance and it was certainly no one-note bus-parking. Klopp’s annoyance at failing to get the better of it is understandable, but it wouldn’t hurt to acknowledge its quality. If only to have a better crack at breaking it down next time. He should also be a bit more grateful for the six points those exact Spurs tactics had already taken off Manchester City to give Liverpool any kind of shot in the title race in the first place.

And, of course, the whole country is deeply grateful for that, because everyone in the country is supporting Liverpool aren’t they? Everyone wants Liverpool to win the title. It says so right here, look.

“Everyone in this country supports Liverpool, the media and everyone.”

That was Guardiola’s response to a 5-0 win over Newcastle, which means he doesn’t have the excuse of immediate annoyance at a result to explain this kind of pass-agg guff. Now Guardiola might have half a point about how Liverpool and United continue to dominate football coverage in this country despite City’s decade of brilliance. We’ve talked about it enough ourselves, including after Sunday’s game, but City’s spending and the source of that spending are huge factors here and Guardiola has to realise that. He is an intelligent man. This is not news to him.

There’s an element of truth in both positions, but neither can expect sympathy. It’s why people might not necessarily particularly want City to win the league and yet there are plenty of people appalled at the thought of a Liverpool Quadruple. After the Arsenal Invincibles, here come the Liverpool Insufferables. You think you’ve heard a lot about that Arsenal side or United’s Treble winners? Absolutely nothing compared to the endless reminiscing the quad squad would generate. It would quite literally never end. It means more, you see. It must not happen. Nothing against Liverpool, but we all know they can be a bit…Liverpool. If that means sportswashers winning the league or the FA Cup or heaven help us even Real Madrid winning yet another Champions League then so be it. Needs must.

Who do you want to win the Premier League title?

Pep says you will all say Liverpool…https://t.co/OHmOmzItGc

Our very scientific Twitter poll suggested if anything a slight preference for City to win the title, and while we’d concede that this result might look slightly different if it were only the title at stake rather than the horror of a Quad, would it look that different? Look how desperate people were to try and asterisk and caveat Liverpool’s 2020 title win as if Covid somehow robbed it of legitimacy when the Reds had it won long before the pandemic pissed about with the season.

Because here’s the thing. Nobody other than that team’s fans like any of the big clubs. They win everything, they still complain constantly, they are either nauseatingly, gloatingly, smugly happy with success or ungratefully, pitifully whinging and  complaining about the sort of disaster seasons most clubs would absolutely kill for. We saw someone unironically describe Manchester United fans as “long-suffering” this week. For fu…

In football, as in politics, life is often about identifying the least-bad options. Whether that’s finding ways to get a draw at Anfield, ways to convince yourself you’re somehow megabucks victims or even ways to prevent Liverpool winning a f***ing Quadruple.