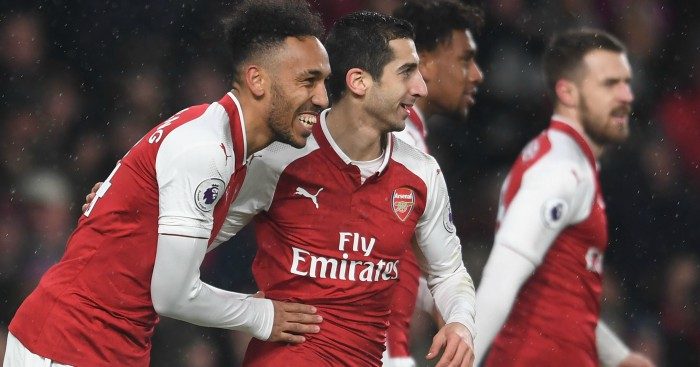 To start with, a sincere apology to Watford fans, because there are no Hornets in the team. Although Gerard Deulofeu, Daryl Janmaat, Etienne Capoue, and Abdoulaye Doucouré were all excellent, I found it very hard to compare them to the players who in fact made the list. That’s because those other players faced sides that 1) had 11 men on the pitch; 2) actually seemed to give a f**k. But the four men named above get Honorary List Status for this week. Oh, and it’s a 4-2-3-1:

Goalkeeper—Ederson (Manchester City).
An excellent save low and a quite brilliant save high, and he almost kept out Gudmundsson’s equaliser. He makes such a difference. I nearly went with Loris Karius, who had a very good match both on and off his line. The penalty save was a classic bit of psychology, too. But he also conceded the penalty, and however you feel about Kane’s leg-dragging, if a keeper comes for the ball he’d better get a touch. Still, a most encouraging performance for Liverpool. Jonas Lössl deserves mention for good work off his line and a penalty save of his own, although his rebound was scored.

Right-back—Trent Alexander-Arnold (Liverpool).
Erratic on defence in the first half, in control in the second. Tackled, blocked crosses, looked very cool against tough opposition. Two excellent crosses in the first half, and don’t forget that he’s the guy who slipped the ball to Salah before the wonder goal.

Centre-half—Federico Fernández (Swansea City)
A very good performance in his best position, the middle of a back three. He played offside intelligently (despite getting sandbagged by Alfie Mawson on the Leicester goal), came out to mark when necessary, and turned aside everything that came his way. There was one wobble when Fousseni Diabaté got past him to shoot from a narrow angle, and a clearance or two could have been better, but he was the key man as Swansea got a key point.

The second centre-half was a near impossible choice, because three outstanding performers—Nathan Aké, Virgil van Dijk, and Jan Vertonghen—all had major failures to their name. Aké lost Xherdan Shaqiri for Stoke’s goal, van Dijk conceded a penalty (and was beaten in the air by Fernando Llorente in the buildup), and Vertonghen was embarrassed by Mo Salah for what looked like the winner. In the end, I went with…

Centre-half—Jan Vertonghen (Tottenham Hotspur)
He really was hung out to dry on the Salah slalom. But he did so many wonderful things over the course of the match—his repeated solo defence against the counter-attack was worth the price of admission and a meat pie to boot. Liverpool fans, I thought van Dijk’s penalty was indeed a penalty. If you didn’t, put him on instead. He showed the full range of his talents under significant pressure, and there should be many more fine performances to come.

Left-back—Ben Davies (Tottenham Hotspur)
A menace every time he touched the ball. Unfortunately there was no end product, but Liverpool needed to play excellent defence to contain him. Also did better than expected at his own end of the pitch against Salah. Elsewhere, Erik Pieters had a strong defensive match, including a near-miraculous goal-line clearance, and would have made the list if he hadn’t conceded the free kick that led to the losing goal. Patrick van Aanholt deserves notice for a good showing at both ends against Newcastle.

Deep Midfielder—Aaron Ramsey (Arsenal)
Say what you will about Ramsey (and I’ve got a book-length monograph ready for the publishers), he’s always been good at getting into the penalty area. The finishes aren’t always clinical, but this time they were. Add in a deflected goal and a lot of other good stuff, and you’re reminded of that magnificent half season where everything he touched was magic.

Deep Midfielder—Lewis Cook (Bournemouth)
Until now I haven’t rated him particularly highly. Although he’s a good passer and gets the ball forward well, his defence has been ordinary at best. But against Stoke he delivered the whole package, particularly in the second half when the Cherries took over the match. At his best when on the ball, he can show remarkable vision. It was his pinpoint pass to Jordon Ibe that started the move for the equalising goal.  His positioning still needs work, and he was forced to foul a few times, but also got in a few nice tackles and slowed up some opposition attacks.

As Matt Stead noted in Winners and Losers, Mario Lemina had a fine showing against West Brom. He and Oriol Romeu make a good combination, because Romeu can focus more on defence, leaving Lemina to help push the play forward, both passing and carrying the ball. He won’t score beauties like that every game, but he adds an extra dimension to the attack. He was equally worthy, only losing out to Cook on the newbie tiebreaker.

Elsewhere, Wilfried Ndidi continues his good play for Leicester. He tends to put in consistently effective performances rather than brilliant ones, and so has made the list only once. But he gets my vote for the Foxes’ player of the year so far.

Attacking Midfielder—James Ward-Prowse (Southampton)
For most of the first half he was basically Ward-Prowsing around, doing little of note. Then he delivered a beautiful near-post corner kick for the Saints’ first goal, and decided this was his day. In the second half he not only scored on a free kick, but advanced the attack effectively at every opportunity. With the game opening up, he was the most incisive player on the pitch. When you see him play like that, you wonder why it doesn’t happen more often.

Attacking Midfielder—Josh King (Bournemouth)
After last year’s goal bonanza (fed by a crazy-high conversion rate), this year he’s been flatly mediocre. He probably wouldn’t have played on Saturday had not Steve Cook been injured in the 12th minute. But down a goal to Stoke, Eddie Howe put King in and changed the formation, and the Norwegian was relentless. In the middle he passed superbly, on the left wing he kept running at his man. In the first half he was robbed of a sure assist by Pieters’ goal-line clearance, but broke through in the 70th minute and scored the equaliser. I should have disqualified him for a yellow card dive, but he’s had a tough season.

Attacking Midfielder—Henrikh Mkhitaryan (Arsenal)
I’m only counting two of the assists (the Aubameyang goal was well offside), but a pleasure nonetheless. He didn’t shirk his defensive duties either. I’m guessing it was just a mismatch with him and Mourinho. Mesut Özil was excellent as well (so what’s new?), but it’s Mkhitaryan’s first go on the list.

Elsewhere, Pascal Gross wasn’t at his super best, but still notched a goal and assist as Brighton put West Ham through the rinse cycle. It wasn’t Alexis’ Sanchez fault that Huddersfield were pulling people out of the stands to foul him, and it’s always fun to watch him take charge. His style fits this United side perfectly. But there were too many other strong performances this week.

Oh, and every ten minutes or so I tell the nearest human, animal, or cuddly toy that Xherdan Shaqiri needs to be played in the middle more. For 45 minutes Paul Lambert agreed, and the Swiss star was on his way to a man-of-the-match performance. But in the second half Lambert decided Max Choupo-Moting was to come off the opposite wing instead, and Shaq was stuck lobbing crosses in for Peter Crouch. Armchair managers are always right.

Striker—Mohamed Salah (Liverpool)
Between the third and 91st minute, it wasn’t much of a performance. Passes and shots went awry, moves didn’t come off. But Salah never stops coming at you. Strikers are paid to score goals, and no one did it better than Mo Salah this weekend.

Playing as second striker in Leicester’s 4-1-4-1, Kelechi Iheanacho had a very good first half against Swansea, with direct running and several through balls. But he missed an excellent chance to open the scoring, and in the second half faded rapidly.