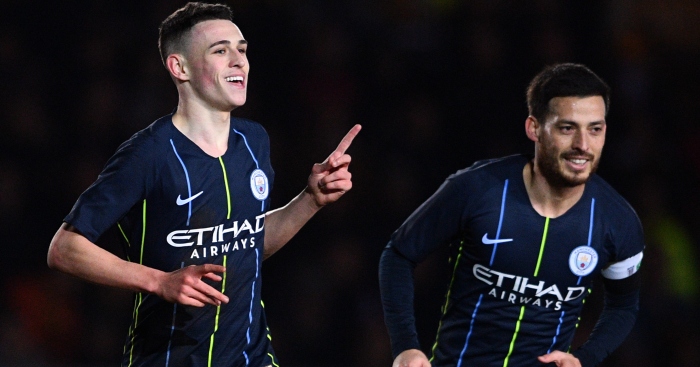 I’m not sure how much Newport and Manchester City’s squads cost and it is sadly impossible to find out as nobody has put together a handy infographic. But my understanding is that Newport were assembled for about seven quid, a bag of footballs and one of those upright ball pumps that looks like a cartoon detonator; while City’s squad cost them more money than has ever actually existed, necessitating emergency measures at the Bank of England while mathematicians looked into how many extra zeroes they had in stock. I think Scrooge McDuck is their owner or something?

Yet the one member of the City squad their fans were most interested in seeing was the one who cost them absolutely nothing: academy graduate Phil Foden.

The 18-year-old is still struggling to get minutes in the Premier League – he has accumulated 91 of them over eight appearances, all of them as a substitute – but has been selected in the starting lineup for seven of City’s nine domestic cup games this season, including the 2-0 win over Chelsea in the Community Shield. Foden has racked up three goals and two assists across those games, all of which City have won, with an aggregate score of 34-2.

There is an understandable yearning from the City fans to see more of the midfielder: fans always love a local lad, and Foden hails from Stockport, on the southern rim of the M60 ring road that circles Manchester. With England has come as runner-up in the under-17 Euros, for which he made the team of the tournament, and won the under-17 World Cup, where he was named the best player in the competition, which also earned him the BBC Young Sports Personality of the Year.

The potential could not be more obvious if you downloaded the editor and looked for the score out of 200, which is why we put him top of our list of the best teenagers at Premier League clubs.

But he is still only 18, and at times we can lose sight of how frightfully young that is, if you’ll excuse my using the word ‘frightfully’ as if I were in an Enid Blyton book. The list of players who were capable of starting regularly for the absolute elite is vanishing small in comparison to the list of truly great players who hadn’t yet made it at that age, and tends to be made up of speedy forwards: Michael Owen, the original Ronaldo, Kylian Mbappe, Jadon Sancho.

Cristiano Ronaldo was 21 before he stopped messing about with stepovers and started scoring goals. Gareth Bale was still playing left-back for Spurs at the same age. Frank Lampard didn’t get his move to Chelsea until he was 23, and even then took a year or two to bed in before he started playing at anything like his peak. And then there’s the false positives who never fulfil their potential, like Jack Wilshere or Micah Richards.

Foden didn’t exactly tear up trees for most of the game against Newport County, much as the pitch may have looked like he had (ZING! Take that, tiny League Two outfit!), but the last 15 minutes of the game were his showcase. He scored a very nice first goal with a run from the halfway line to satisfy the City fans’ lust for young blood, before later smashing in a second at the end of a run from 40 yards out to kill any hope of a ludicrously unlikely comeback from battling County.

The youngster picks the ball up inside his own half, drives forward, and buries it!

His fourth goal of the season 👊 pic.twitter.com/h9gH5LwGu5

Yes, it may only have been Newport, but none of the more senior players on display took control of the game the way that Foden did. It was already clear from the glowing terms in which Guardiola speaks about Foden that the City manager has no doubts about the midfielder’s technical ability, but with any young player, the uncertainty tends to be around physical prowess and the ability to cope with the mental pressure.

On both these counts, Foden passed the test in south Wales. The way he stepped up to kill the game off not once but twice was a strong indication that he is not a player who will go hiding when things aren’t going entirely his side’s way; and despite standing just 5’7” and having a build like a greyhound, Foden was trusted to complete the full 90 minutes against a side that Guardiola had suggested were “taller and stronger than us”, and in conditions Foden himself admitted were the worst he has ever played in.

“It’s a big squad and everyone wants to show the boss that they can start. He rotates the squad a lot so you have to show what you can do and there’s always a fight for places, but it’s good competition,” Foden said after the game. In his words just as in his performance, Foden revealed he is a young man who does not feel awed by the incredible players around him – he sees himself as one of them.

Little by little, Foden is getting these opportunities, and eventually, that will turn into regular league starts. If City weren’t in such a tight title race, you feel like this would be a foregone conclusion; now it remains to be seen whether Guardiola feels Foden has done enough to warrant a place regardless.