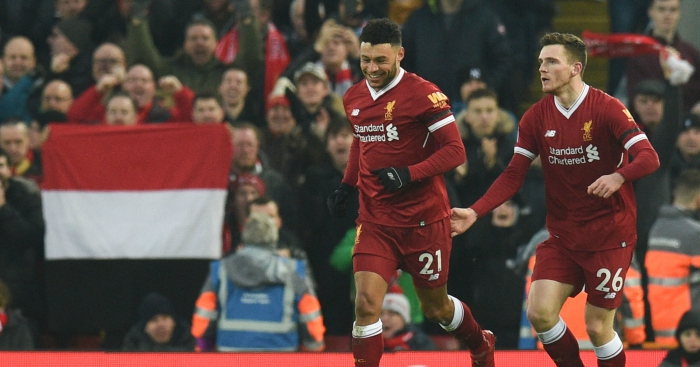 This list celebrates great individual efforts, so although you’ll spot a couple of Liverpool players, the rest of the Reds have to be given Official Honorary List Status For A Brilliant Team Performance. For those actually on the list, it’s a 4-1-4-1:

Goalkeepe – Kasper Schmeichel (Leicester City)
A bunch of quality showings, with good play both on and off the line from Jack Butland, Lukasz Fabianski, Wayne Hennessey, and Alex McCarthy. Butland probably had the best pair of saves, but Schmeichel edges it because he had a bit more to do than the rest: cutting out crosses, coming out to claim and punch, and making two very good saves of his own, including an injury-time stop of Marcos Alonso’s free kick.

Right-back – Craig Dawson (West Bromwich Albion)
Three good performances, two quite similar. Both Dawson and Timothy Fosu-Mensah defended very well, the former against Brighton with marking and positioning, the latter against Burnley with tackles. Both added danger to the attack, the first with runs into the box and the second with crosses. Both seemed to tire towards the end. Dawson’s goal breaks the tie, and a beauty it was, too: a classic downward header from a set piece.

The third man was Antonio Valencia, who scored an even better goal and could easily have had an assist as well. On another day he would have made the list, but had to be tested on defence a bit more to beat out Dawson.

Centre-half – Jan Vertonghen (Tottenham Hotspur)
Normally a centre-half has to face a serious attack to make this list, but with a relative dearth of candidates I’ll make an exception. He was The Belgian Maldini against Everton, with an absolutely exquisite technical performance. He’s not the strongest or the fastest, but his positioning, timing, and heading ability are first-class. The stats say two tackles, two interceptions, and eight clearances, so that’s enough involvement for me.

Centre-half – Harry Maguire (Leicester City)
A good match marking Alvaro Morata and otherwise repelling Chelsea attacks. Once let Cesc Fabregas get behind him but recovered quickly. He can be quite spectacular at times, but is at his best when he keeps it simple, as here.

The only other candidate was James Tarkowski, who had a typically effective match against Crystal Palace except for the penalty shout on Bakary Sako. It was Tarkowski’s mistake that set up the situation in the first place, and I thought it was a penalty. If you disagree, it’s basically a tie with Maguire, with the tiebreaker your choice.

Left-back – Andrew Robertson (Liverpool)
One of the best full-back performances of the season. You name it, he defended it, a performance to keep on DVD. Charlie Taylor of Burnley held off Wilfried Zaha and company all afternoon, including a super block to deny Zaha. But a nearly-disastrous backpass was a significant blemish.

Deep Midfielder – Paul Pogba (Manchester United)
Superb. Nothing to make a highlight reel, just play after quality play. His array of talents is unique in the league, and all (except goal-scoring) were on continuous display. For this list the standards for him are as high as any player in the league, but he met them easily.

I really hated leaving out Emre Can. Not only did he have one of his best games for Liverpool, but got left out a few weeks ago because he was on a list that didn’t make the site because of the holidays. I could have added him as a second deep midfielder, but there were several newcomers in the attacking line who were equally deserving. Elsewhere, Wilfred Ndidi had a good match against Chelsea, somewhat overshadowed in this company.

Right Winger – James Ward-Prowse (Southampton)
If he was going to be an England squad regular, it would have happened by now, but this was an excellent performance. Playing on the right of a 4-4-1-1, he was effective dropping back to defend against Richarlison, and got into the box for two very nice finishes. I wish he had more creativity, but if he can add a few goals to his game he won’t need it so much.

Attacking Midfielder – Manuel Lanzini (West Ham United)
When David Moyes first arrived at West Ham, he used Lanzini to start attacks from deep in midfield. That was crazy, and to Moyes’ credit he figured it out before too long. Against Huddersfield Lanzini was where he belonged, right behind the striker, and ran wild along with Marko Arnautovic in the second half. He never met a shot he didn’t like, but he’s quite a good finisher from inside the area.

Attacking Midfielder – Alex Oxlade-Chamberlain (Liverpool)
Man of the match in a match that had a lot of matchy men. We know he can drive forward with the ball–will his passing be good enough to find all those attackers in space? Obligatory sentence about Klopp vs. Wenger. Obligatory other sentence about his past inconsistency and not jumping to conclusions.

Left Winger – Son-Heung-Min (Tottenham Hotspur)
I will never ever tire of putting this guy on the list. If the game opens up even the tiniest bit, he’s at your throat. Once again devastating with his direct running, well-timed passing, and killer finishing. Anthony Martial was very lively for Manchester United, and would have replaced either Son or Ward-Prowse if he’d been a bit more incisive in the second half.

Striker – Marko Arnautovic (West Ham United)
There’s been plenty written about him on the site already, so I’ll just say MarkoMarkoMarko my man! List regulars Roberto Firmino and Harry Kane lost out on the newbie tiebreaker, but they’re decent players, know what I mean?