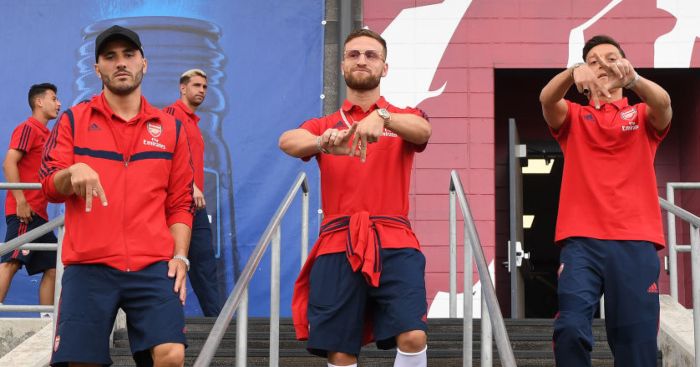 Two men have been charged over a security incident in connection with two Arsenal players, police have confirmed.

Arsenal announced on Friday that Mesut Ozil and Sead Kolasinac would not be in their squad for Sunday’s Premier League opener at Newcastle.

The club said the players, who were targeted by car-jackers in north London last month, had been withdrawn due to “further security incidents”.

It is now known an incident occurred on Thursday, with the Metropolitan Police confirming that two men were arrested.

According to reports, the men were arrested after becoming involved in an altercation with security staff outside Ozil’s house.

A police statement read: “Two men have been charged under Section 4a of the Public Order Act following an incident in Camden on Thursday, 8 August.

“Ferhat Ercan, 27, and Salaman Ekinci, 27, were charged on 9 August following the incident and are due to appear at Highbury Corner magistrates’ court on 6 September.”

Neither midfielder Ozil, 30, nor defender Kolasinac, 26, have been harmed.

Arsenal’s statement on Friday read: “Mesut Ozil and Sead Kolasinac will not be part of the squad for our opening match against Newcastle United following further security incidents which are being investigated by the police.

“We are liaising with the police and are providing the players and their families with ongoing support.

“We look forward to welcoming the players back to the squad as soon as possible.”