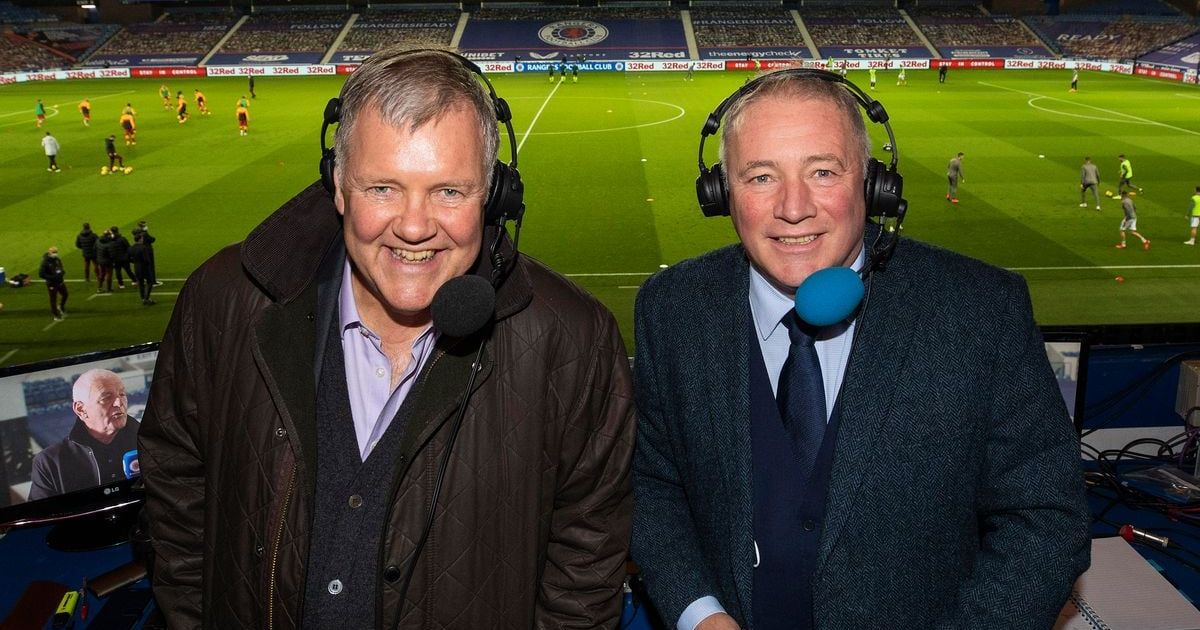 Clive Tyldesley and Ally McCoist have been a joy throughout this tournament. Even Twitter approves and that is pretty much a miracle.

Whether we are online writers, bloggers or tweeters, we are granted the luxury of spending time crafting our words.

We can chop and change words and certain phrases, taking the time to hone and reflect before we post to the world.

Twitter does not allow editing but it does provide a license to delete, making what you said literally cease to exist, barring a hasty screenshot.

With verbal communication, you don’t get such luxuries. As soon as the mouth moves and you formulate vocal patterns we call words, it’s out there for good.

A stumble of the tongue, Freudian slips, we are all susceptible. This is a dangerous thing in our digital culture, where one innocently uttered incorrect fact or misspoken idiom can cause a meltdown.

This is why commentators must be masters of the verbal arts.

No room for getting tongue-tied as a goal is about to go in. They must know what to say and how to draw excitement at a certain time. Or when to be more downbeat and even macabre, as we saw during Denmark’s opener against Finland.

Most commentators go through the journalism route and have years of training at non-league grounds before getting anywhere near a mic at a professional level, at which point they are usually sat next to a more youthful chap, who in theory helps bring out the tiny nuances of the game.

Typically these people – the co-commentators – are former athletes. The idea is that such experience offers insight to the audience not many others can, making for a more rounded experience.

But that’s rarely ever the case. Viewers seldom enjoy who they listen to. You only have to type their name into a social media search bar to see the results. And it’s usually the inexperienced co-commentators who bear the brunt of criticism online.

It must be hard for a former player to come in and become essentially a television presenter, with no previous experience.

Even if they have an abundance of knowledge – presumably more than the average fan – it’s a hard task to relay your opinions to an audience in a way that’s both informative and entertaining. Just because Walter White is a genius at making meth, it doesn’t make him a good chemistry teacher.

There’s no room for ‘tried your hardest – keep going’ on social media, today’s equivalent of the pillory for the famous.

And so it’s been a breath of fresh air seeing social media trend former player Ally McCoist and the comments being overwhelmingly positive. The public’s general sentiment is that McCoist is not shit, clueless or biased.

McCoist and Clive Tyldesley are quite simply an amazing partnership. Charismatic, funny, engaging and insightful, they tick all the right boxes. But it’s hard to pinpoint precisely why.

A Football365 love letter to… (for me) Clive Tyldesley

The most obvious answer is our sentimental attachment to them. The jovial, blush-faced Scot featured on our screens as a captain on BBC’s Question of Sport and was also the co-commentator in the early FIFA games.

While at 7:45 pm on Tuesday evening in the mid-noughties, Tyldesley was in our ears as we experienced the Champions League halcyon years on terrestrial TV.

Then there is their rapport. The way they bounce off each like two mates in a pub, drunk on hops and both in excellent form.

Also in his favour is the fact that Tyldesley so publicly scorned ITV after they demoted him after 22 years to a younger, less popular commentator. “I am upset, annoyed, baffled. I’ve done nothing wrong,” he said in an emotionally charged video.

Some have taken issue with McCoist in being merely ‘funny’, as if such a label deprives him of any sense of perspicacity on the mic, but he’s witty, whimsical and also shrewd in analytical discourse.

Sometimes it’s hard to distinguish precisely what you find so joyous about a particular person without merely running into a series of superlatives.

No-one did it quite as well, nor as joyously, as Ally McCoist

Between them, there’s a shared camaraderie that somehow does not exclude us. Like any beloved podcast, soon the subject matter becomes secondary to the people. You find yourself nodding along to their points and feel as though your own thoughts are being vicariously transmitted through their mouths.

Of course, this isn’t to suggest that in something as highly emotive as football, we are tuning in merely for the conversation of McCoist-Tyldesley, but certainly their input electrifies our viewing experience.

Elsewhere, even if the commentary team is nothing but merely fine, swarms of hate will fill social media about just how stupid their take is; the mediocre will be slain online by the viewers who sit tapping away in indignation after every single utterance.

But whatever you think about the landscape of social media, McCoist-Tyldesley have bucked the trend. Even though they could be hung with their own words at a second’s notice, they sail through unscathed as true anomalies. They even topped their categories as best commentator and co-commentator in a recent survey by OLBG.

Even more remarkable is that they have not become warped by their own standing, like the Come Dine With Me presenter becoming too self-aware and his jokes more contrived.

This Euros will be remembered as half-measured compared to other major tournaments, with most stadiums not reaching full capacity. And so more of us are stuck at home, forced to experience the game through our TV sets amid the arse-end of this pandemic.

So thank God these two have made this summer a bit more bearable, both in their commentary and also in keeping the online naysayers at bay.