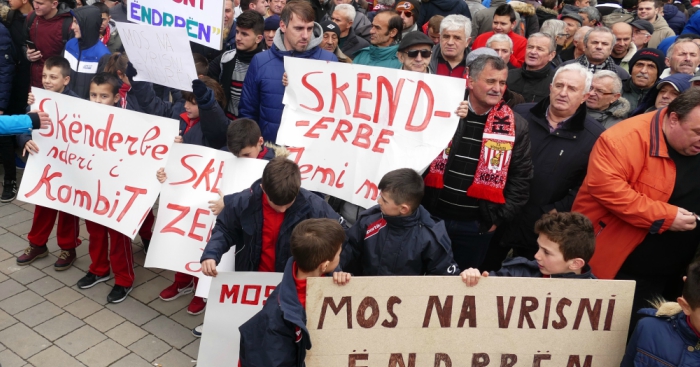 UEFA have handed Albanian Superliga leaders Skënderbeu a 10-year ban and €1million fine in what has been described as ‘the worst ever punishment for a European club’.

The European governing body have found Skënderbeu guilty of match-fixing after over 50 matches were flagged as suspicious, including some in the Champions League and Europa League, as well as their domestic league.

The ruling, made on March 21, was not publicised by UEFA, but the written report advising the suspension has circulated throughout Albanian media, and also to The Guardian.

Skënderbeu are likely to challenge the ban through the Court of Arbitration for Sport, with majority shareholder and team president Ardjan Takaj stating: “We are clean of this story.

“It was an expected decision,” he added. “We are convinced of our innocence and even if the Court of Arbitration for Sport upholds this decision, we will address Switzerland’s Federal Court.”

UEFA conducted their investigation into Skënderbeu matches over a period of two years, stating in February that inspectors had received death threats as a result.

The Albanian side were banned from European competition for the 2016/17 season over match-fixing allegations, with UEFA taking the unprecedented decision to suspend them on the basis of relying on data analysis solely  from their betting fraud detection system, as opposed to an official investigation.

The system flagged 53 games as having been potentially manipulated from November 2010 to April 2016, with four matches of particular note: two Champions League qualifying ties in 2015/16, and two from that season’s Europa League group phase.

The 5-1 and 3-0 defeats to Sporting Lisbon and Lokomotiv Moscow are ‘of particular concern,’ according to The Guardian, as a ‘flurry’ of ‘highly suspicious bets’ were made during the matches on the eventual outcome.

The most high-profile case, and one likely included in UEFA’s alleged 93-page report, concerned a Champions League second qualifying round tie with Northern Irish side Crusaders. Skënderbeu won the first leg 4-1 and took a 2-1 lead in the second, only for Crusaders to score twice, hit the post and have two goals disallowed, all in the final ten minutes.

The report states that there were “some outrageous suspicious live betting” patterns during the match, and two tweets from Crusaders goalkeeper Sean O’Neill are thought to have been submitted as evidence.

A rally was held in Albania last month to protest UEFA’s decision, which now appears to have been made final.

If there's not a @UEFA investigation into our game tonight then there is something wrong! Skenderbeu's player clearly had the game over 1/2

3.5 goals. Was a joke. Last ten minutes I have never seen football like it! #BettingScam

Do read The Guardian’s report on the story. It is absolutely fascinating.