Home All The News UEFA open proceedings against Arsenal and Cologne 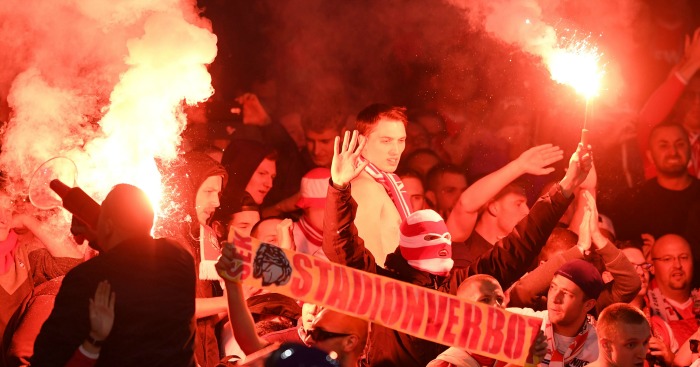 The Group H tie, in which Arsenal eventually ran out as 3-1 winners, was delayed by an hour as ticketless Cologne fans looked to gain entry to the ground.

The visitors were issued with 3,000 tickets, but around 20,000 Cologne fans are believed to have made the journey to London.

There were clearly thousands of away supporters sitting among Arsenal fans, causing a security risk.

Five arrests were made over the course of the evening and Arsenal issued a statement on Friday insisting the safety of supporters was the main concern at the time as the Premier League club “launched a full review” of the events.

Both clubs now face disciplinary charges from governing body UEFA, which include crowd disturbances, setting off fireworks, throwing of objects and acts of damage by Cologne fans, while Arsenal face a probe for “stairways blocked in away supporter sector”.

UEFA will deal with the case on September 21, the governing body confirmed in a statement on Friday.

Given the nature of the disturbances, both inside and outside the ground, a UEFA probe was inevitable, with pictures emerging of a minority of Cologne supporters causing problems for the stewards.

Arsenal say the club will take measures to avoid any repeat of the issues faced on Thursday night.

“Following last night’s UEFA Europa League match with Cologne we would like to stress that fan safety was always our paramount concern and informed all decisions made,” a statement from Arsenal read.

”We have launched a full review into the circumstances surrounding the game and will ensure any lessons that can be learned are used in the future.”

The issues only intensified when Jhon Cordoba gave the Bundesliga side a ninth minute lead with his 40-yard strike.

The Gunners, though, came from behind after the interval as goals from Sead Kolasinac, Alexis Sanchez and Hector Bellerin secured the three points.

After the game, Cologne coach Peter Stoger refused to take questions on the crowd disturbances – but Arsenal boss Arsene Wenger admitted he thought the contest would be postponed.

”I thought they would not play the game, because I can’t see the police taking any risk,” Wenger said.

”We live in a society of 100 per cent security and I thought they would never take a gamble to play this game when I saw the images around the stadium. But I must say our supporters as well dealt well with the situation as well and there was no aggravation.”

Arsenal’s statement also said it was ”very disappointing” that so many home tickets appeared to have been purchased by Cologne supporters via ticket touts after working closely with the Metropolitan Police, who deployed extra numbers once trouble began, and UEFA.

”We worked in full consultation with police and UEFA officials on the night and in advance of the game and had taken extensive steps in advance to prevent tickets being sold to visiting supporters,” it read.

”This included a number of measures including ensuring no tickets were sold via general sale and that no red memberships purchased after the draw were able to be used to get tickets in the home end for this match.

”We also worked with our colleagues at Cologne to stop supporters travelling without match tickets.

”The 3,000 tickets issued to Cologne fans was in line with competition rules, but it is clear many more visiting fans arrived, causing significant congestion and disturbance outside the stadium before kick-off.

”Many tickets were sold through touts and this is very disappointing and something we continue to work hard to address.”