Home All The News UEFA to PSG over summer spending: BTW, FFP LOL 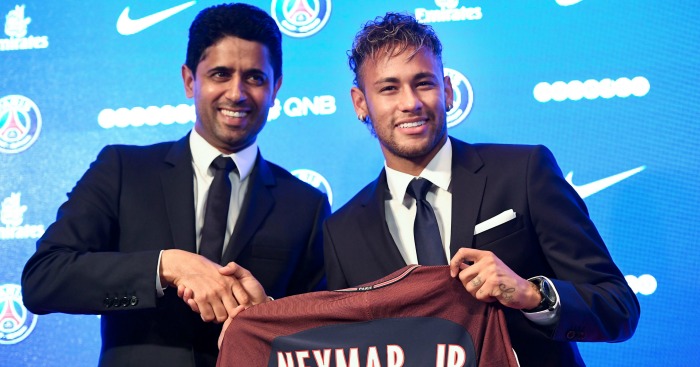 The French side smashed the world transfer record when they paid the £198million release clause in Brazilian superstar Neymar’s Barcelona contract.

They followed it up by recruiting another of the world’s most highly sought-after players, Kylian Mbappe, on a season-long loan deal from French champions Monaco on Thursday.

That deal comes with what was described as an option – but is thought to be an obligation – to then purchase the player next summer for a fee of around £166million, which would currently be the second-highest fee ever paid for a player.

UEFA’s Financial Fair Play (FFP) regulations were introduced by its former president Michel Platini in a bid to ensure clubs lived within their means and only spent in proportion to their revenue.

European football’s governing body released a statement on Friday which read: “The investigatory chamber of the UEFA Club Financial Control Body has opened a formal investigation into Paris St Germain as part of its ongoing monitoring of clubs under Financial Fair Play (FFP) regulations.

“The investigation will focus on the compliance of the club with the break-even requirement, particularly in light of its recent transfer activity.

“In the coming months, the investigatory chamber of the UEFA Club Financial Control Body will regularly meet in order to carefully evaluate all documentation pertaining to this case.

“UEFA considers Financial Fair Play to be a crucial governance mechanism which aims to ensure the financial sustainability of European club football.

“UEFA will make no further comments on this matter while the investigation is ongoing.”

PSG announced the deal just hours before France’s World Cup qualifier against Holland at Saint-Denis, where Mbappe scored the final goal in the last minute of a comprehensive 4-0 victory.

Monaco, meanwhile, had added no further detail on a carefully-worded deal which, providing the permanent purchase goes through without a hitch next year, will be the second-most expensive in football history behind Neymar’s transfer in a serious show of intent by the French club under the presidency of Nasser Al-Khelaifi and its Qatar-based owners.

Mbappe, born in the Paris suburb of Bondy but a product of ASM’s youth academy, played 60 times for the club having made his first-team debut in December 2015.

The teenager scored 26 goals in all competitions last season as Monaco won Ligue 1 and also reached the semi-finals of the Champions League.

Speaking to PSG’s website about his move, the forward believed he was in the right place to further develop his talents.

”I was attracted by the club’s project, it’s one of the most ambitious in Europe,” Mbappe said.

“I want to continue my development while helping the team to achieve the great goals they have set.”