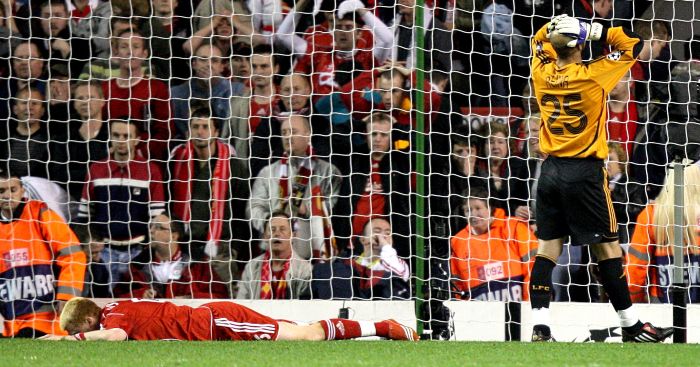 Ajax defender Nicolás Tagliafico’s calamitous mistake against Liverpool on Wednesday night led one commentator to suggest it was “one of the ugliest Champions League own goals” he’d ever seen.

You know where we’re going with this…

We must first define what an “ugly” own goal is, or at least what one might assume the commentator was trying to label.

For me, an ugly own goal has to have an element of decisive input on the part of the player. By that I mean, some conscious decision has been made and a failure in execution has resulted in error.

This rules out own goals that have occurred as a result of a split-second reaction, or any own goal arising from normal play, i.e. any genuine attempt to win or clear the ball.

Below are some all-time classic Champions League gaffes.

A match that represented one of the darkest moments in the Catalan giant’s long illustrious history, David Alaba’s seventh-minute howler offered the Spaniards a fleeting moment of respite on an otherwise utterly humiliating night.

Alaba will have been comforted by his side’s favourable 8-2 result on the night and Bayern’s ultimate victory in the competition, but this is certainly not one for the scrapbook.

It should also be noted that Alaba, exquisite player that he is, has previous. Check out his moment of complacency while playing for Austria in 2016.

Of course, no respectable own goal list would be complete without an entry from the own goal connoisseur, Man United’s ponderous defender Phil Jones.

With so many goals to choose from in his catalogue, I was spoiled for choice on this one. After much deliberation, I went with this tidy finish against Valencia back in 2018.

In the pantheon of great own goal scorers, Herr Bender is a true artiste. The best part about this one – apart from the finish of course – was Bender gesturing as though he had been shoved when there is clearly no-one near him.

This Champions quarter-final was an epic affair, with Monaco emerging victorious 6-3 on aggregate.

Señor Ramos’ 78th-minute gaffe levelled the tie on aggregate, before Cristiano Ronaldo and Marco Asensio put the Spaniards out of sight in extra time.

Perhaps not all three of these goals deserve a place on this list, but they more than fit the criteria collectively.

A truly unbelievable tie that saw three own goals scored in quick succession, one comically fatal error after another, it seemed neither side truly wanted to win this one.

An oldie but a goodie from the second season after the Champions League rebrand. This first-leg tie saw Monaco secure a 1-0 victory over AEK thanks to a moment of madness from Greek defender Vlachos.

Monaco, led by Arsène Wenger, were beaten in the semi-finals by eventual champions, AC Milan.

Moments like this probably explained at least part of the Spanish coach’s rationale.

These two sides have played out a number of Champions League crackers down through the years. Galatasaray, spearheaded by talismanic striker Hakan Şükür, were a formidable side during the early to mid-90s.

This tie was a rather one-sided affair, one that boasted one of the greatest own goals ever witnessed on the European stage. At 3-0 down and with not a soul in proximity, Bülent compounded the Turkish side’s poor night with this horrific attempt at a clearance.

One of my favourite eras of football, when Liverpool and Chelsea seemed to face off every other week, English teams dominated the Champions League, with three out of four teams in the semi-finals that season.

John Arne Riise was a real stalwart for Liverpool over his seven years at the club, probably the last guy that deserved to be on the end of such an error. Chelsea would go on to win the tie 4-3 on aggregate, before losing to Premier League rivals Man United in the final.

How do you think Phil Thompson really felt about it?

Piqué’s 72nd-minute goof is one of the more prominent lasting memories I have of another humbling night for the Spanish giants.

4-0 down from the first leg in Germany, Real were stifled by a resilient Bayern in the first half, before Arjen Robben and co. picked them apart in the second.