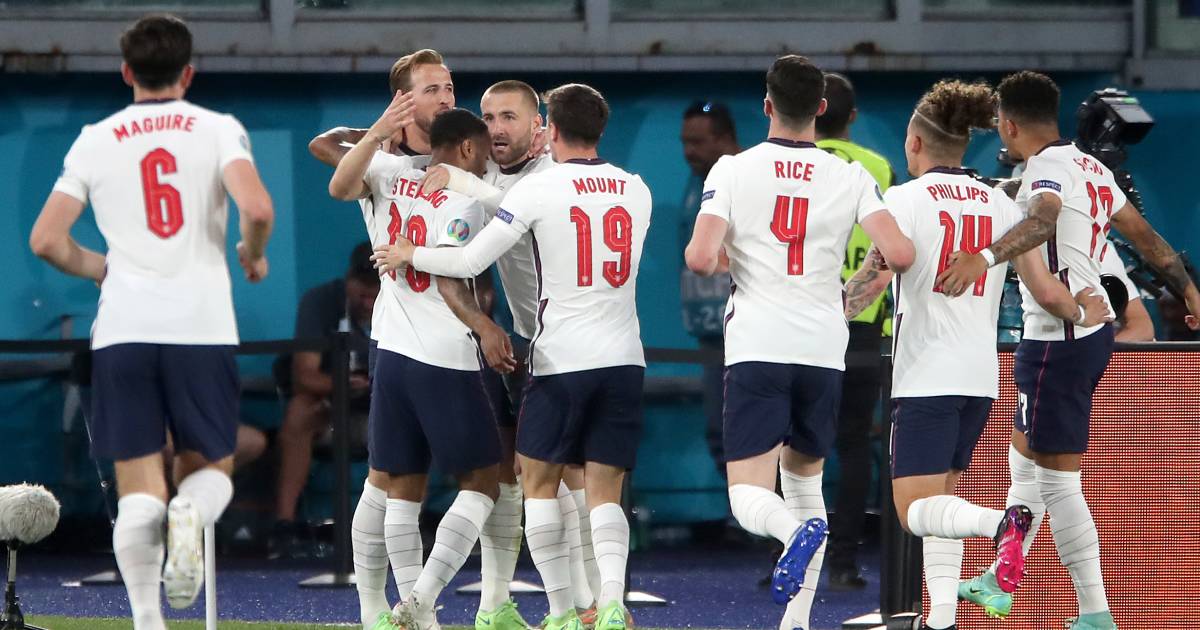 Well, that was pretty good, wasn’t it? England continue to get better and better at Euro 2020 as Ukraine were swept aside in Rome. Is it actually going to happen? It really might, you know.

KYLE WALKER
Short pass let Ukraine in for a chance on 16 minutes at a time when only precisely that kind of complacency looked capable of getting England into trouble. Also caught out by a run from Yaremchuk in a difficult first half. What moments Ukraine managed to muster in the opening 45 minutes mainly came down England’s right. Has always had that occasional penchant for doziness in his game. Hopefully out of his system again now, because he’s had a fine tournament. Reading these back, this sounds like quite a negative start to ratings about a 4-0 win in a quarter-final. They get more positive now, I promise. And he was fine really.

LUKE SHAW
Glorious, curving free-kick delivered perfectly on to the admittedly sizeable target provided by Harry Maguire’s big old slabhead. Then finished a wonderful, intricate England move with a pinpoint cross from open play to give Harry Kane a sitter. And all on Jose Mourinho’s new home ground. You adore to observe it.

JOHN STONES
Has he made a single mistake in five games? Cannot think of one. Just the 96.4% pass completion tonight – made more passes at a higher completion rate than any other England player. Just absolutely immense. We could never have dared to dream even his career was on track that he could become this good or this consistent; that he’s got there from where he was seven or eight months ago is just outrageous. And thanks to the man above him on this list it might not even be the best or unlikeliest redemption story in this England team. If you’ll excuse us, we’re just going to be over in the corner getting thoroughly carried away.

HARRY MAGUIRE
Thumping great Harry Maguire of a header to give England that 2-0 cushion after what – and this is easily forgotten in the giddiness of what followed – had been a slightly dicey end to the first half for England. That second goal felt very needed. Also makes him the first England player ever to score in two major tournament quarter-final wins. Brilliantly brilliant once again, and an England side that looked solid enough in the games he missed looks so, so much better with him and Stones together.

DECLAN RICE
Another quietly immense performance in a tournament where he’s made that his trademark. Importance to England now so great that he was withdrawn soon after the third goal to avoid any possibility of a yellow card suspension.

KALVIN PHILLIPS
Didn’t need to catch the eye today because England were in such total control for such long periods. Like Rice, was able to take a bit of extremely well-earned rest. What an outrageous luxury for England. What kind of thing is happening here?

JADON SANCHO
Plenty of flashes of his quality, and the positions he took up and his pace gave England a lovely shape and such a cutting edge. But really the very best thing about this performance was that it was perfectly good and yet absolutely nowhere near what he’s capable of. What a genuine daftness England’s attacking options are right now.

MASON MOUNT
Early tumble in the penalty box significant because of how advanced he was. But while Sterling dazzled and Sancho had his moments, Mount’s biggest contribution of the first half was a crucial and canny intervention to prevent Yarmolenko getting a shot away. Much improved set-piece delivery as well on his return to the side. Others inevitably caught the eye more but Mount did his job of work.

RAHEEM STERLING
His best all-round performance of the tournament yet, despite failing to add to his goal tally. Fantastic run to create space out of nothing and then a clever and perfect pass to create the all-important nerve-settling early goal for Harry Kane. Great disguise on the pass, too – only two people knew what was about to happen and together they could do absolutely terrible things to the Premier League for Manchester City next season. Pinched the ball again high up the pitch 15 minutes later and almost played in Jadon Sancho. Great little flick to set Shaw free to cross for Kane’s second. He and Sancho had seven dribbles between them, and Sterling won three free-kicks. Brilliant, brilliant footballer having a brilliant, brilliant time.

HARRY KANE
Took that early chance so, so well on the stretch, albeit assisted by a goalkeeper who almost appeared to be trying to get out of the way of it, buried the header for the second and then nearly scored an absolute nonsense of a volley to complete a hat-trick. It earned the corner that allowed Henderson to break his international duck, so it was still worth it. It’s very good that he’s good again. Started the tournament being replaced for tactical reasons – now being taken off to rest up for a semi-final. He and England have come quite some way.

JORDAN HENDERSON (for Rice, 57)
Came on to protect Rice from a yellow card and within seven minutes had scored an England goal that had been 63 caps in the making. One of those nights.

KIERAN TRIPPIER (for Shaw, 65)
My nut is utterly and entirely freaked out by the sight of England being able to just give a whole bunch of key players a bit of a rest for the last 25 minutes of a major quarter-final. There is no complaining about Trippier at left-back when he comes on after 65 minutes at 4-0 up to give a breather to new national treasure Luke Shaw, for some reason. This is all a daftness.

MARCUS RASHFORD (for Sterling, 65)
Sterling also got the luxury of an extra 25 minutes off. Rashford was fine when he came on.

JUDE BELLINGHAM (for Phillips, 65)
Looked great when he came on to provide an absurd reminder of just how deep this England squad is. Foden and Grealish didn’t even get on, lads.

DOMINIC CALVERT-LEWIN (for Kane, 73)
A substitution probably delayed by five minutes or so to give Kane a chance at a hat-trick. Again, a mad luxury that this substitution was possible. Again, Calvert-Lewin did fine. But it’s all just so wildly un-English in its cold, calculated, calm professionalism.