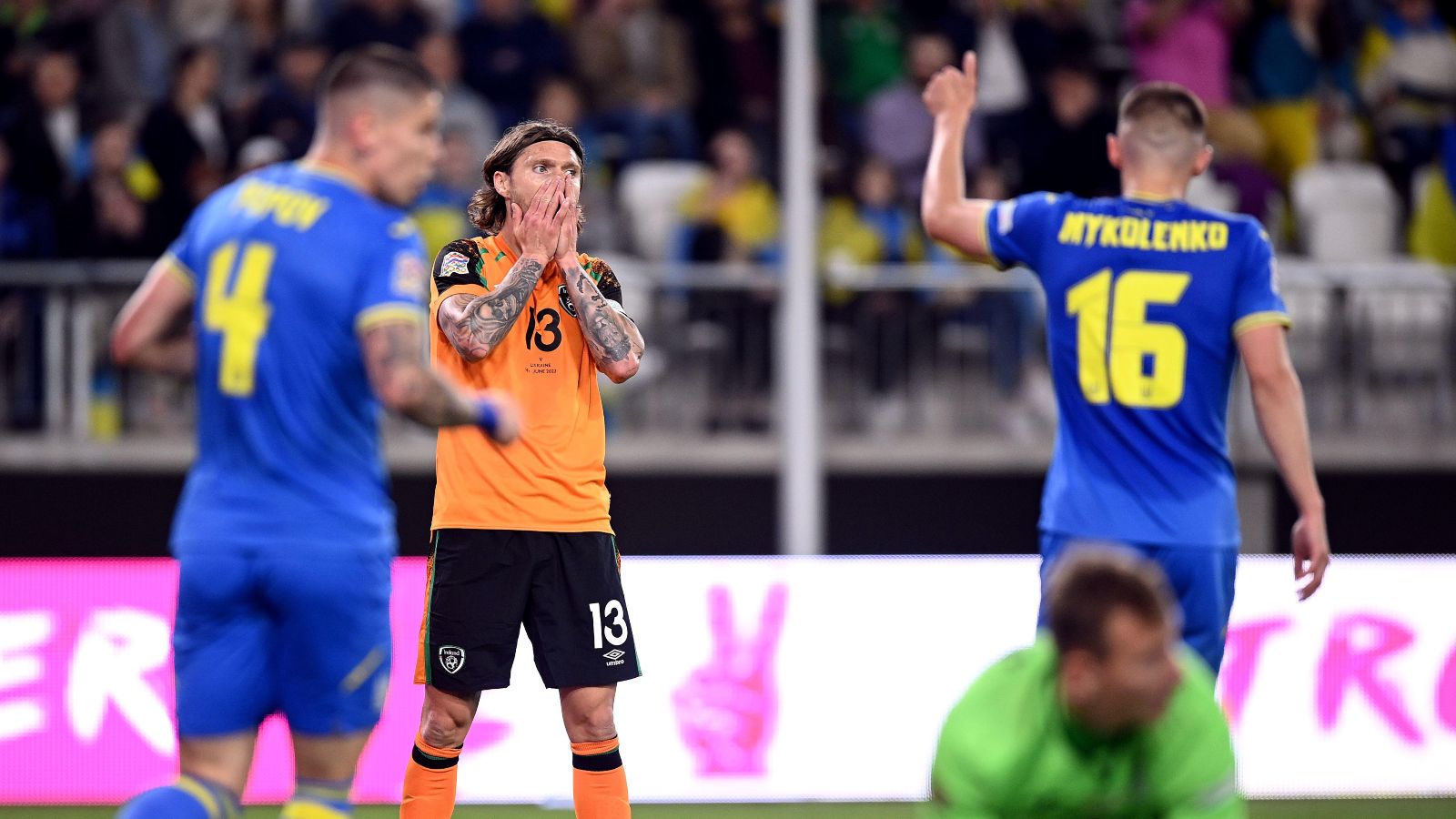 Artem Dovbyk’s goal in the second half was enough to earn Ukraine a point against the Republic of Ireland in the UEFA Nations League.

Burnley defender Nathan Collins weaved his way through Ukraine’s ranks before firing past Dmytro Riznyk with the outside of his right foot.

This stunning goal was only enough to earn the Republic of Ireland a draw. Dovbyk’s leveller ensured that Ukraine sit top of the group ahead of the remaining games.

A largely inexperienced Ireland team – with the notable exception of James McClean, who won his 94th cap – performed admirably at the LKS Stadium, with Collins, Dara O’Shea, Josh Cullen and Jason Knight particularly impressive to provide manager Stephen Kenny with further vindication of his vision.

Kenny was forced into reshuffles at the back and in attack, with Shane Duffy, John Egan and Michael Obafemi unavailable, and that meant starts for O’Shea, Darragh Lenihan, making his competitive debut, and, for the first time since September 2019, Scott Hogan.

Captained by McClean, who had joked at the pre-match press conference that the team chef had more chance of getting the armband, the visitors started on the front foot. with Troy Parrott’s early cross causing problems for keeper Dmytro Riznyk.

Ukraine, who had lined up with three at the back in Dublin last Wednesday evening, opted for four this time around, and that allowed the dangerous Mykola Shaparenko to adopt a more advanced role, although it was Ruslan Malinovskyi who tested keeper Caoimhin Kelleher with an 11th-minute snapshot.

However, the visitors should have been in front within seven minutes when Knight took advantage of Illia Zabarnyi’s slip to cross to the unmarked Parrott, who powered his header back across Riznyk but wastefully wide of the far post.

Kelleher was in action once again when defender Mykola Matviyenko’s 22nd-minute ball over the top put Vitaliy Mykolenko in behind wing-back Alan Browne, the keeper blocking the defender’s initial effort before Browne recovered to repel his follow-up.

Malinovskyi’s premature departure through injury and Mykhailo Mudryk’s arrival as his replacement saw Shaparenko drop back into midfield alongside Serhiy Sydorchuk, restoring the partnership which had proved so successful at the Aviva.

However, it was the playmaker’s 31st-minute pass which was picked off by Collins, who strode forward and eluded challenges from Oleksandr Zinchenko, Sydorchuk and Zabarnyi before stabbing the ball expertly past the advancing Riznyk to open the scoring in stunning style.

Full-back Oleksandr Karavaev blazed over from a tight angle and skipper Andriy Yarmolenko saw penalty appeals waved away by Turkish referee Ali Palabiyik after going down under O’Shea’s challenge as the home side responded.

However, Knight had forced a save from Riznyk in the meantime and the half-time whistle arrived with Ireland’s lead intact.

It remained so, however, for less than two minutes after the restart when Yarmolenko found half a yard beyond McClean to cross low and hand Dovbyk the simplest of tasks to level.

Lenihan drilled over after Josh Cullen’s free-kick had dropped invitingly for him, but Ukraine had their tails up as the midfield battle became increasingly physical and Ireland were left clinging on for dear life.

To their credit, they eased their way back into the came and Parrott saw a powerfully-struck effort deflected into the side-netting before Knight sent Riznyk diving across his goal once again.

A hugely entertaining game remained on the boil until the final whistle, but neither side was able to fashion a decisive moment as the spoils were shared.