Home All The News Ulloa: Leicester must learn how to cope as champions 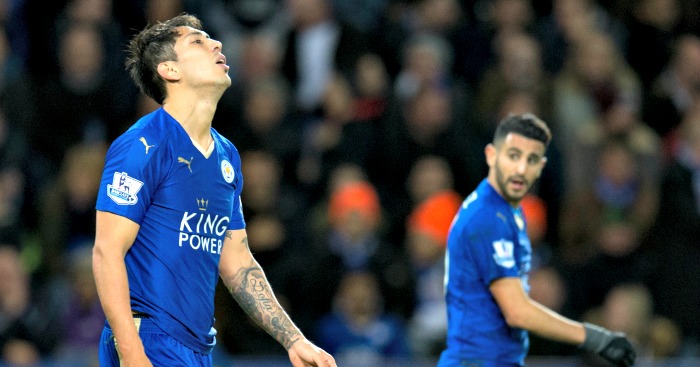 Leicester striker Leonardo Ulloa admits the Foxes must learn to handle the pressure of being Premier League champions.

Claudio Ranieri’s side are 10 points behind leaders Manchester City and have lost three games this season, the same amount they suffered in the whole of last term.

Sunday’s 0-0 draw with Southampton extended their unbeaten home league run to 19 games but Ulloa conceded the Foxes are finding it hard after romping to a shock title by 10 points in May.

“It’s so difficult, in every game every team wants to beat us because we are the champions,” he told LCFC TV. “We need to consider that and it’s more difficult than the last year. We need to keep going and work. We are improving in training and in every game.

“It was a difficult game, they played well and had some chances so the point was good for us.

“Some players are going with their national teams now and the others rest but we need to think about the next game.”

Leicester struggled to break down the Saints and Charlie Austin missed the visitors’ best chances when he hit the post in the first half and was denied by Kasper Schmeichel after the break.

Southampton also drew a blank in the Europa League in their 0-0 draw with Hapoel Be’er Sheva on Thursday.

But captain Jose Fonte believes the side have made progress since Claude Puel was appointed in the summer, with the Saints 10th heading into the international break.

“We had chances to score more than them so we’re a bit disappointed not to get three points but they’re a good side and it’s another clean sheet which is important,” he told the club’s official site.

“We had the chances today and unfortunately we couldn’t put them away but we’ve been working on it and the goals will come.”