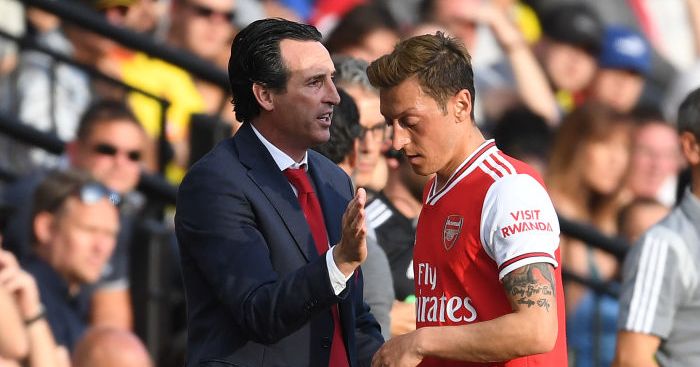 Former Arsenal boss Unai Emery claims Mesut Ozil is “a bit below the top players at the moment”, claiming he struggled with consistency and the physical demands of the Premier League.

Emery had a difficult relationship with Ozil, often leaving him out of matchday squads completely despite the Gunners crying out for a creative player to help unlock stubborn defences.

Under Mikel Arteta, Ozil has returned to the fold on a consistent basis, with the midfielder himself admitting that he is much happier under his new boss, but Emery remains unwavering on his assessment of the World Cup winner’s attributes.

“He’s a very good player, that’s clear,” the 48-year-old said in an interview with Marca. “But the physical demands in the Premier League are high.

“His performances are unpredictable. He’s a bit below the top players at the moment. Sometimes Arsenal play better with him but other times he doesn’t make such a difference.”

Emery also added that he still feels Ozil has yet to reach his maximum potential under Arteta, but admitted that the atmosphere around the club appears to be far more positive since his departure.

“Mikel has a lot of experience as a footballer and has worked alongside Pep [Guardiola at Manchester City], who is one of the best. He fits the profile of an Arsenal coach perfectly.

“He’s playing a 4-2-3-1 formation like I did – Ozil is still their ‘No.10’ and is slowly looking for his identity. But with my departure, the hostile atmosphere has relaxed. The results are not the best at the moment but you have to give [Arteta] time to improve them.”