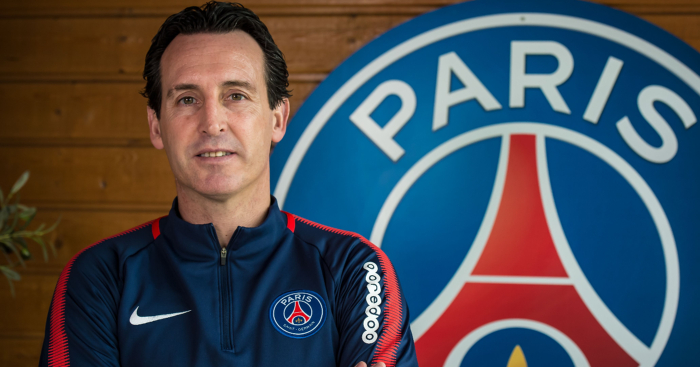 “I’m not the kind of coach who says: “Let’s do a few piggy in the middle exercises and get home for lunch.”
Emery on his style

“Fans want their emotions to come to the surface and the only to way to make that happen is to give them a team that transmits emotion: intensity, attacking, scoring goals, competing, fighting. That awakens them. The fans want emotions. The Champions League generates more money and allows you to buy better players but what fans really want is to enjoy their team, to win things. If you have money but you don’t generate feeling and emotion, it’s worthless. You can be in the Champions League and generate money but if you get knocked out in the group it means nothing to the fans. Sure, you’ve made £20m, but what does that mean to them?”
Emery on priorities

“Mourinho’s stance is that of a crybaby. We have reasons to draw up a list with errors and to make a public complaint for every time we have been adversely affected, but we don’t.”
Emery on Mourinho after Real Madrid boss produced a list of 13 errors by officials in 2010.

“You have to divide that tie into two parts. In the first game we won comfortably against a winning side like Barcelona, and then at the Camp Nou we were not able to respond against the same side.There is a third element also which was out of our hands and that was the referee. I am saying that referees, against the biggest club, have more respect. Look, not consciously, but involuntarily.”
Emery blames the officials for PSG’s famous collapse at Barcelona.

“Little by little we have improved the club and for what’s coming next season. I have made my way in the context that occurred and I think it was positive. So I would give myself a seven, yes, a seven out of 10 of course. I think it’s the right mark for me.”
Emery reflecting on his PSG reign

“One day, Jorge Valdano made the following reflection: ‘At Barcelona the leader is Messi; at Madrid it is Florentino Perez, and the Atletico leader is Simeone. “A player, a president and a coach. Each time, a different leader profile. I know when I’m the main person in a group and when I’m not. It’s a process that every coach has to live and internalise, it’s something you learn with time and experience. In each club you must know what role you play and what role you assign to the rest of the group. My opinion is that at PSG the leader is called Neymar. Or more exactly, the leader will be called Neymar, because that is what he is becoming. Neymar came to PSG to be the leader, to live the necessary process to become the world’s number one. This is a process that still needs a little bit of time to consolidate. In Manchester City, the chief is Pep Guardiola. At PSG, the leader must be Neymar.”
Emery reflecting on the leadership dynamic at different clubs

“We are prepared to work with different systems. The 4-3-3 is the main system we use, it is a great for keeping possession and applying pressure. But after that we need to have another system for different matches. Most importantly, it’s getting the balance and positioning on the pitch with and without the ball.”
Emery on flexibility

“When I came here the supporters said to me: “please don’t play Reyes.” I said to him: “Jose, do you know what they’re saying about you?” We worked on it. And now every time he goes out at the Sanchez Pizjuan, the crowd are chanting: ‘Reyes! Reyes!'”
Emery on improving players

“The Champions League is nice, and we want to play in it, but you meet the very top teams in that competition and they overcome you. When you are in the Europa League, you know you can win it.”
On winning three Europa League titles

“For every game I might have spent 12 hours just on the video. Videos are very important. We work hard so that they have the best information and it has to be a good video: in an hour the players have to understand everything you’ve seen in 12.”
Emery on preparation

“When I arrived at Sevilla, the first thing they said to me was: ‘Unai, playing in the Champions League, like Valencia did with you, is lovely but you haven’t experienced what it is to win things.’ Now I have; I have felt it. And it is the greatest feeling there is, something really shared. We can’t be a super-top team because of budget. But if you can grow, it’s very gratifying. And joy comes from the illusion, the hope, the dream, of winning a title.”
Emery on being ambitious despite limitations

His players on Emery

“Emery put on so many videos I ran out of popcorn! He’s obsessed with football – it’s practically an illness. He’s one of the best managers I’ve had. I worked with him for three years. I couldn’t handle a fourth!”
Joaquin

“We have a great coach and he is getting the very best out of us – we don’t relax whether we are on the pitch or on the bench. We have really healthy competition for places here. “[Emery] supported me, pushed me and helped me develop. Winning this final and going straight into the Champions League – what more can you ask for?”
Ever Banega after Sevilla’s Europa League final win in 2015.

“We passed the ball around neatly,” he said. “I think we had the better of the possession. But that won’t buy you anything.”
Julian Draxler after PSG were knocked out of the Champions League by Real Madrid

“It’s all well and good putting eight goals past Dijon, but it’s in matches like this that you have to stand up and be counted. I am disappointed. We always say the same things, we always do the same things, and in the end, we are always floored in the same way.”
Adrien Rabiot after the Real Madrid defeat.

“Emery has had a big hand in this title. He made us very careful and gave us a good philosophy. It’s always beautiful to be champions, it’s part of the story.”
Marquinhos after PSG sealed the Ligue 1 title

“He does a very great job. When he arrived, it was a bit difficult for everyone because great players were gone. It is not easy for him to come into this context, but I think we have improved a lot. He is a great coach and we trust him. If you want to create something important, you have to keep at it.”
Marco Verrati

His bosses on Emery

“Everyone talks about him in a positive way. Everyone except journalists. But it is the coaches’ life to be criticised. Unai is one of the best coaches in the world. As the president Nasser Al-Khelaifi said at the beginning of the season, we are 200 per cent behind him. 200 per cent! We have no doubt about him and he has all our confidence.”
Paris Saint-Germain sporting director Antero Henrique.

“During his two years at the helm of our professional team, Unai Emery has demonstrated a constant commitment. His immense passion for football, his involvement in the work, have allowed the club to continue its roots among the elite of French and international football. I congratulate Unai for his investment in our project and I wish him, on behalf of the club, a complete success in the challenges that will await him.”
PSG president Al-Khelaifi after parting with Emery three months later.

“The coach has understood our idiosyncrasies perfectly. He is crazy about football, the hours he puts in, how he manages the squad. I say that now after being successful, but also at the start of the season.”
Sevilla president Jose Castro