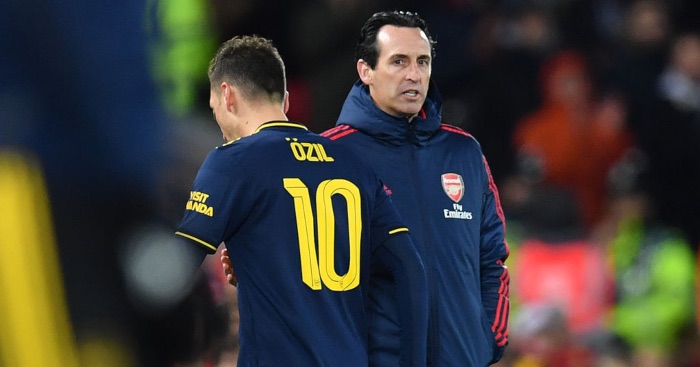 Unai Emery says that Mesut Ozil “has to be self-critical” over their time together at Arsenal.

Emery was sacked by Arsenal in November after 18 months in charge, most of which were spent trying to justify his treatment of Ozil.

The pair never seemed to mesh well in north London. Ozil discussed the “hard time” he experienced under Emery earlier this year, while the manager previously suggested his stance was influenced by the club’s hierarchy.

The Spaniard, who held individual meetings with every player – except Ozil – the day after losing in the Europa League final to Chelsea, says he “tried with all my might to help” him.

“I spoke a lot with Ozil,” he told The Guardian. “He has to be self‑critical too, analyse his attitude and commitment.

“I tried with all my might to help Ozil. Throughout my career, talented players have reached their best level with me. I was always positive, wanting him to play, be involved.

“In pre-season I told him I wanted to help recover the best Ozil. I wanted a high level of participation and commitment in the dressing room. I respected him and thought he could help.

“He could have been a captain but the dressing room didn’t want him to be. That’s not what I decided; that’s what the players decided. Captains are ones who have to keep defending the club, the coach, teammates.

“Sometimes they [his performances] were better, sometimes worse, like all players. Sometimes he wasn’t available because he was ill or his knee hurt. Watford was his first after the robbery, and I put him in. I was always open to talking, he was always in my plans, but he had to do his bit. And there were things I couldn’t control.”