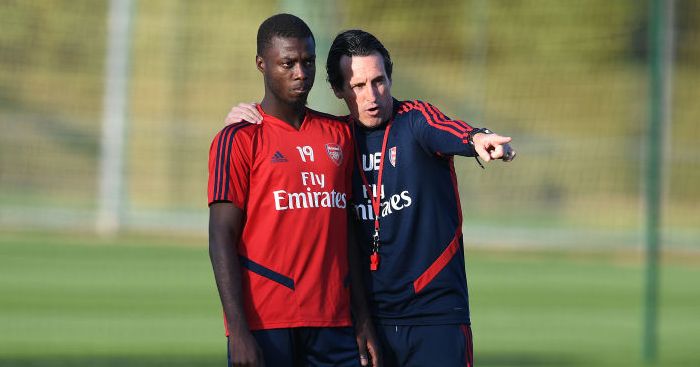 Unai Emery has blamed part of his demise at Arsenal on their failure to sign Wilfried Zaha.

Emery was sacked by the Gunners in November after 18 months in charge.

The Spaniard signed ten first-team players on permanent deals, with club-record buy Pepe the most expensive by far at £72million.

But Emery has confirmed the football world’s worst-kept secret: Arsenal and his first choice would have been Zaha.

“We signed Pepe. He’s a good player but we didn’t know his character and he needs time, patience,” he told The Guardian.

“I favoured someone who knew the league and wouldn’t need to adapt. Zaha won games on his own: Tottenham, Manchester City, us. Incredible performances. I told them: ‘This is the player I know and want.’ I met Zaha and he wanted to come.

“The club decided Pepe was one for the future. I said: ‘Yes, but we need to win now and this lad wins games.’ He beat us on his own.

“It’s also true he was expensive and Palace didn’t want to sell. There were a series of decisions that had repercussions.”

It seems that Arsenal did not only bid for Zaha to pressure Pepe into agreeing to join.

In an interview earlier this year, Emery laid into the “attitude” of his Arsenal squad and explained the struggles he faced with the winger.

“Nicolas Pepe, who was a choice of the club, clearly needs time to adapt,” he said.

“But I accept the rules, it would be a mistake to criticise it because I have also benefited from this judgement in the past.”