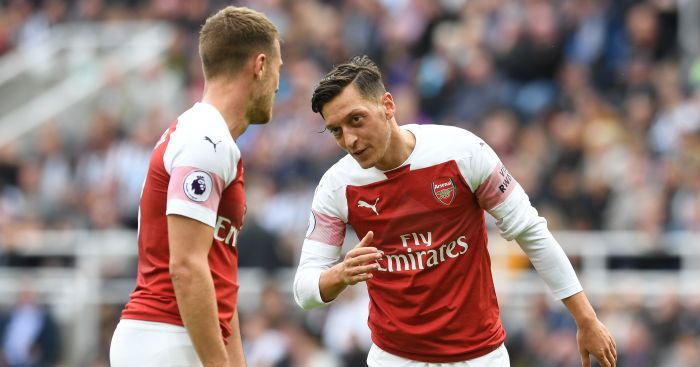 Unai Emery has paid tribute to two Arsenal players who have allowed him to be flexible with his formation.

Arsenal are fifth in the Premier League table after 30 games, and can go third simply by avoiding defeat at home to Newcastle on Monday evening.

The Gunners have won five of their last seven games and have a reasonably forgiving Premier League run-in to balance with a Europa League quarter-final against Napoli.

But Emery feels his side are prepared for the tasks at hand, with Aaron Ramsey and Mesut Ozil having been particularly influential in recent weeks.

“I think we are taking a good performance using a different system and different players,” Emery said. “For example, we started the last two matches playing 3-4-1-2.

“But we finished it playing 3-4-3, with players helping us in the 90th minute with a different system and different positions. I think we need to continue doing that.

“Maybe we can start with one system, maybe during the match we can change and the best positive is for all the players to be ready to help us, with a good mentality for work like we need each time.

“At first I used information from last year or the last two years. Mesut can play like a No 10 player, or starting on the right or left, in a different system, and he has a good mentality.

“And also Aaron Ramsey can play in a system with two or three midfielders, getting more in the opposition box.

“I used this information with this player and I think this player’s mind is very open to help us, to play in different positions and give us a big performance. He has a very good attitude to do that.”