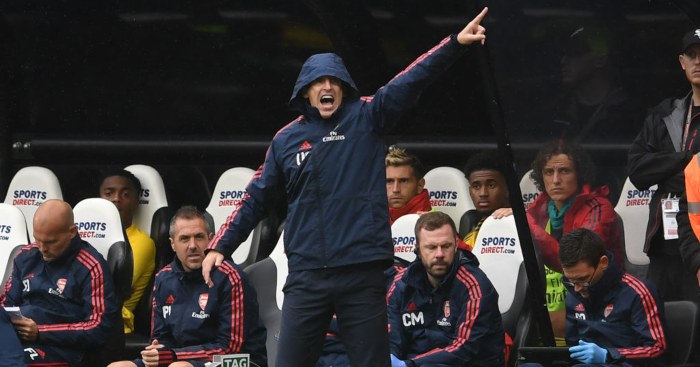 Unai Emery has told Shkodran Mustafi and Mohamed Elneny to find new clubs in the coming days – for the good of their own careers.

The pair have dropped down the pecking order at the Emirates Stadium and were expected to be sold this summer.

However, with the Premier League transfer deadline passed and the European window closing on September 2, both players are yet to be moved on.

Mustafi played plenty of football in Emery’s first season in charge but has always polarised the opinion of supporters and has made plenty of mistakes.

He remains Arsenal’s fifth most expensive signing but could leave in a cut-price deal in the coming days having not made the squad for the first two Premier League games of the campaign.

Elneny, who has also yet to feature having played for Egypt at the African Cup of Nations, arrived from Basle in January 2016 but has never been able to hold down a regular place in the Arsenal midfield.

After signing the likes of David Luiz and loanee Dani Ceballos this summer, Emery is now keen to move on players who will be left unsettled by a lack of first-team opportunities.

“Last year with Mustafi and Mo, when they didn’t play they weren’t happy and I spoke with them a lot of times last year and this pre-season and I think it is positive for them to leave and sign for another team where they can be protagonists and be happy and continue their careers.

“They are very big players but for one circumstance or another, they are going to have less chances to show their capacity or to be happy with us and the minutes they play in matches.

“We respect them, they are training with us, but they know their situation and only I am wishing the best for them.”