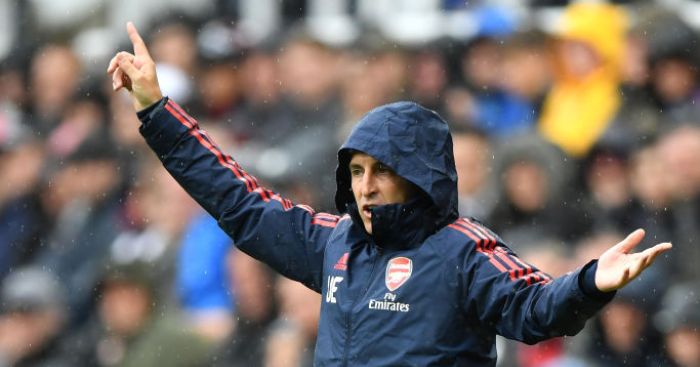 Even with the four-man advantage, it was a bench that could be backed to beat its 11 starting counterparts. Unai Emery established a reputation as a substitute teacher last season – many Arsenal fans still wish that were a more literal description – but naming a squad with the sole intention of relying on refinement from replacements felt a step too far.

The Spaniard did not intend for Henrikh Mkhitaryan to endure a woeful first half, of course, nor for Granit Xhaka to be anonymous with Pierre-Emerick Aubameyang left isolated. No coach would plan for such an underwhelming performance, purely to make the subsequent improvement seem even more pronounced.

Yet, for those who ignore the intricacies of injuries, match fitness and pre-season conditioning, that was the only explanation. The bubble that encapsulated Arsenal after such an unexpectedly impressive transfer window burst as soon as the line-up for the opening game was announced. Positivity turned to poison, anticipation was replaced with anxiety.

There were no shiny new faces, only those deemed to have failed last season with a surprise injection of youth. Calum Chambers and Reiss Nelson were the only players not to have featured for the Gunners in Emery’s first campaign, and both were returning from loan.

So Nicolas Pepe, Dani Ceballos, David Luiz and Gabriel Martinelli watched on from the sidelines as Arsenal stuttered and stumbled through the first half against a solid Newcastle. Their introductions felt like a matter of time.

Not so. This leopard has changed its spots. Emery depended not on a substitute to provide added impetus, but on himself. He is known to twist with unerring regularity – and only moderate success – so the sight of him changing the course of a match by sticking provides encouragement.

Arsenal were not notably better in the second half, just more incisive with far wiser decision-making. And by the time Aubameyang opened the scoring from an Ainsley Maitland-Niles cross, Newcastle’s fine resistance had been broken. That Emery’s first change came six minutes later – the control of Ceballos coming on for the youthful exuberance of the excellent Joe Willock – was striking.

The visitors had more shots and conceded fewer in the second half than the first, giving up more of the possession and – as the drop in pass success after half-time dictates – took considerably more risks on the ball. They went from sterile to stimulating through a presumably frank dressing room discussion instead of a tactical or personnel change. Emery has learned his lessons from last season.

Bringing on Pepe, Ceballos and Martinelli in the second half was a message of intent, a sign of things to come.

It was only the second 1-0 to the Arsenal in a Premier League away game under Emery, despite the chant from the London travellers suggesting it was a far more common occurrence. And considering their previous three Premier League away clean sheets came in separate calendar years, this was a sizeable step forward.

It was also a necessary one. An exemplary summer in the boardroom has placed the onus on the pitch. Emery – and Arsene Wenger – were somewhat harshly assigned the roles of lightning rods during years of thunderously woeful mismanagement behind the scenes. It is a sign of progress that he can now be judged properly for his own work and no-one else’s. A fourth season of Europa League football will not be accepted.

He deserves credit and trust for passing this first test. It was a brave selection: not since February 1998 had two English teenagers been named in a Premier League starting line-up for Arsenal. But Emery’s courage in his own convictions was similarly heartening. It is quite something to win games because of your manager, not in spite of him.