Home All The News ‘Unbelievable feeling’ – Scotland advance to the Euros 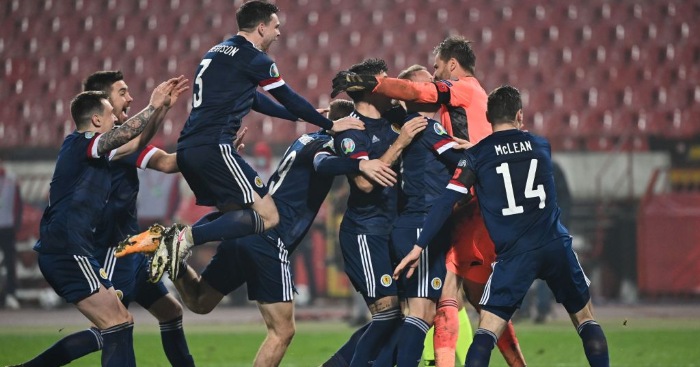 Scotland are through to next summer’s European Championships after beating Serbia 5-4 on penalties in Belgrade.

Steve Clarke’s side were the better team in normal time. They took the lead in the 52nd minute through Ryan Christie. His edge of the box shot evaded Predrag Rajkovic to go into the bottom corner.

Scotland were edging towards victory until that was clawed away from them in the 90th minute. Real Madrid forward Luka Jovic came off the bench to equalise to send the game into extra-time.

At this point, penalties always looked inevitable, and that was just what he got. Each side looked assured taking their spot-kicks.

The first nine kicks were all converted, which made the score 5-4 to Scotland before Serbia’s fifth penalty.

Fulham forward Alexsandar Mitrovic stepped up to take it, but it was saved by David Marshall to send Scotland through. This is the first major tournament they have qualified for since the 1998 World Cup in France.

They will be part of Group D in the Euro’s alongside the Czech Republic, Croatia and England. Scotland will face the Three Lions on Friday 18 June at Wembley in their second group game.

Christie told Sky Sports – as cited by BBC Sport – that it has been ‘an amazing night’.

He added: “It’s been a horrible year for everyone and we knew we could give something back to the country.

“It’s a monkey off the back and we can move on from here.”

Meanwhile, Liverpool left-back Andy Robertson said after the game that this was the ‘most emotional’ he has ever been after a game:

“When it goes to penalties you always back Marshy [David Marshall]. We’ve come so far as a squad and I’m proud of everyone. They’ve been through a lot – lots of criticism, a lot of negativity. Really hope everyone back home can see the positive side of this.

“In the 90 minutes. It’s come down to one of the best away performances I’ve been involved in. It shows you the strength we’ve got to come back from that, we stuck together throughout.

“I can’t wait for summer. it’s the most emotional I’ve been after the game. I think I was next, but my hamstring had seized.”

Boss Steve Clarke told Sky Sports: “You have to be so proud of the way the players responded to (the equaliser). That was a sore one. We were so close to where we wanted to be.

“The reaction as to dig in during extra-time, we got it to penalties and we produced again from the penalty spot.

“It’s a magnificent night again for everybody in Scotland. We said we’d try to put a smile back on their faces and I hope they enjoyed the moment as much as we did here in Belgrade. Yeah they can smile tomorrow.

“We’ve spoken a lot since we had the low spot in Moscow and I mentioned in the team meeting before the game about how far we’d come as a group of players and the spirit we were building.

“I said the players were determined to get there. Maybe a couple of months ago people still doubted us a bit but we’ve shown we’ve been building great character in the squad, a fantastic backroom staff for me to work with and we’re positive.

“We’ve been positive for a long time. It’s taken us a little while to get everybody on side with us but I think after last month people started to believe.

“This time we didn’t let them down, so this time the whole nation can be proud – but nobody can be prouder than the players on the pitch because they were magnificent.”

Asked how his emotions were after seeing Scotland forced through the torture of penalties before claiming victory, he said: “I’m actually remarkably calm.

“I thought I might have had a little tear. Some of the boys have been in tears but that tells you how much it means.

“When Marsh made the save I had a little glint in my eye, but I managed to keep my emotions under check. I might have a little cry when I get back to my room.”