"Roger wanted to do it, it's as simple as that." And what an absolute belter it was... 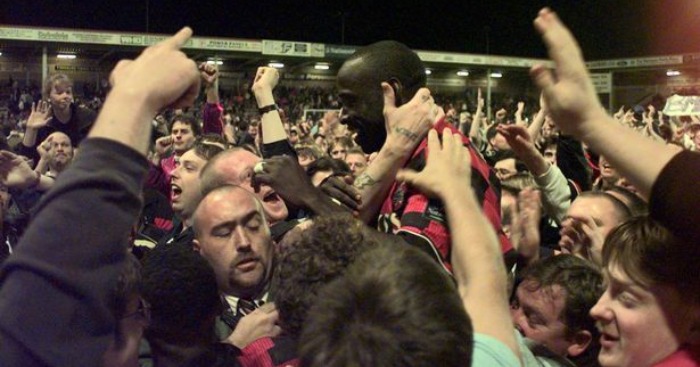 “Roger wanted to do it, it’s as simple as that.”

Late August 1997, Men in Black by Will Smith is top of the charts but for a brief moment, the boys in the red and black chequers from Walsall are the ones setting the tempo.

Roger Boli – brother of Rangers legend Basile – opens up Southend United with an extraterrestrial scissor-kick like Basile Boli had opened up Stuart Pearce’s cheekbone with a head butt at Euro ’92.

First question, was Roger’s overhead-kick better than Trevor Sinclair’s (the connoisseur’s benchmark for bicycle-kick perfection)? Well yes, and the fact that it was scored at the Bescot makes it even better. Second question, what was Boli even doing at Walsall?

Roger Boli, the man who had played in the European Cup for Auxerre and Lens, finding himself in front of 3,304 in the Black Country and having the audacity to do that. Have a watch of it yourself, even better in slow motion as Boli poises himself to deliver a southpaw scissor-kick into the Southend top corner. The Southend goalie might have been Simon Royce, it might have been the great Neville Southall – on the Shrimpers’ books at the time – but let’s face it, it didn’t matter, the man between the sticks was mere decoration as Boli’s mega hit swept pass him.

The supplier was Jean Francois ‘Jeff’ Peron. Like Boli, he was a player who had experienced the partisan support of the Stade Bollaert – home of Racing Club de Lens – but was now listening to the awed silence of the Bescot as his overhit cross was dispatched by Boli with the lethal balletic ability of Carlos Acosta with a machine gun.

“Roger wanted to do it, it’s as simple as that. Half a Fosbury flop and then smack into the top corner,” said Boli’s manager Jan Sørensen, the cigar-smoking Walsall gaffer who had himself started the 1978 European Cup final for Bruges v Liverpool and likely sat back after the Southend match with a big fat Montecristo, safe in the knowledge he’d assembled a team that would walk Division 2.

It did not quite turn out that way as Walsall finished the season in 19th place; the Saddlers and Boli tailed off after Christmas and Sørensen was sacked. There was time for an FA Cup fourth round tie at Old Trafford however, with Sørensen hoping for a bit of Boli wizardry to down Ferguson’s United. That ball-craft came early in the second half when Boli left Ronny Johnsen for dead and hit a 25-yarder destined for the same top right-hand corner he had targeted v Southend. This time, Peter Schmeichel, in his pomp, supplied the deftest of touches to palm the shot onto the woodwork, leaving fellow Dane Sørensen – sporting a fantastic mullet – swearing in his native tongue.

Boli wasn’t to be denied however, notching the consolation in the 5-1 defeat with a well-placed header, Peron again the instigator and Boli showing the class that had caught the eye of scouts when he was a 16 year-old with no boots in the Romainville suburb of Paris.

“Very very special, I would like to see the television because I don’t understand my score, it’s very magic,” Boli had said after his Southend thunderbolt, expressing himself in broken English better than any Englishman would be able to muster if scoring an equivalent over in France.

There’s no answer to why the 1994 joint top scorer in French football found himself at Walsall or indeed his manager Sorensen, who had – according to When Saturday Comes – been manager of a local bowling alley before being hired by Saddlers chairman Jeff Bonser. Both came in from the cold in their own way via Boli nailing the top corner. “I was hot hot,” said Boli in a later interview while lamenting that he left it too late, at 32, to properly break the UK.

A £150k move to Dundee United saw success evade Boli, with fans of the Tannadice club voting him one of their worst ever signings. Yet the Scottish sojourn was just a blip and there’s clearly class in the genes with Boli’s son Charles, born in Dundee, now a coveted attacking midfielder for Lens just like his father.

If this was a piece for The Athletic I’d be jumping on a plane to Abidjan to try and pin down Boli, now a successful agent, and ask what brand of deodorant he was wearing when he scored the Southend worldy, but let’s leave him be. You can afford to relax knowing that you have scored one of the all-time great screamers. Boli is still a go-to signing now for players of the Championship Manager 97/98 computer game, destined to inject class into any team and maybe, just maybe, a left-footed overhead kick to set the goal screen flashing.