It's so underrated that we don't have a picture. But my word, he was brilliant... 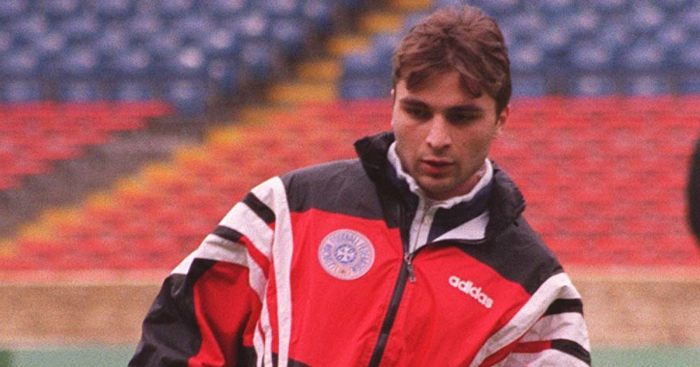 Choosing between Kinkladze’s scarily good goals is an equally daunting task for that mid-90s period when Kinkladze showed English football what controlling a ball was all about, dancing though defenders and caressing the ball into hungry nets.

The goal v Southampton from 1996 is a standout with Man City’s number 7 untouchable on the run from fifty yards, elastic ankles pivoting past four Saints defenders before a cute nudge over an exposed Dave Beasant. The deftest of touches in the lightest of blue City shirts, leaving Southampton, who were used to Le Tissier taking the piss in training, mesmerised at the tiny genius from Tblisi.

Georgi Kinkladze’s goal against Southampton in 1996 has been placed number five in @FourFourTwo‘s ‘The 25 best Premier League goals EVER’. pic.twitter.com/jVTiiFq0Np

Kinkladze showed up the rank mediocrity of many a Premier League toiler whose main focus was closing the game down. He prised matches open and even with concerns over stamina, the Georgian could change the game in the space of twenty seconds. He did it because he could.

There was another at Middlesbrough a year earlier, with Kinkladze roaming and able to eat territory with a superlative left foot and man-beating acceleration. There wasn’t any point in personal duels as Kinky could cut inside like no-one else on his naughty left.

A further half dozen defenders taken out, eyes glued to a ball that was stuck to Kinky’s boot like the Solvite adverts of the 70’s. Then that dream-like middle act between Kinkladze wandering the 18 yard box and passing the ball into the Riverside bottom corner.

But without a wonder goal v Wales in 1995, Kinkladze’s Maine Road sojourn may never have happened. Folklore says that City owner Francis Lee called in his first refusal on Kinkladze after seeing video footage of his performance in Georgia’s 5-0 European Championship qualifying demolition of Wales in late 1994. Kinkladze notched in his hometown with a typically nonchalant southpaw shot, as Georgia walked all over Wales with a team featuring Temuri Ketsbaia and Shota Arveladze.

Yet it was Kinky’s chip over Neville Southall in the return game at Cardiff Arms Park that sealed City’s £5million bid. If Wales were expecting revenge, it never came as Kinkladze reserved his game-changing technique for the 73rd minute to dash the Dragons’ hopes of a border hop to Euro ’96.

Some might say the Wales defence should have got closer to Kinkladze as he picked up the ball on the half-way line but the natural response to deal with someone of such talent is to stand off and hope to nick the ball away from tired legs closer to goal.

Kinkladze laid the ball off with his left, almost coming to a halt but such was his ability to cover ground in short spurts he surged onto the one-two with a balletic switch between right and left giving him a clear five yards on his defender. The camera operator, never mind the Wales rearguard didn’t have the foresight to imagine Kinky chipping the keeper from 25 yards.

Southall would have barely heard the crinkle of the net as Kinkladze’s perfectly weighted chip sailed over his head, the Georgian’s movement contrasted by the Wales stopper’s rigidity.

Kinkladze wheeled away in a beautiful zig-zag Adidas kit as uniform as his career, blighted by civil strife in his home country.

“All the runs that Kinky makes are winding. And all the goals that City score are blinding.”

City fans still sing their Kinkladze song to the Oasis tune Wonderwall but it was his ability to slide away from defenders that made his goals sing.