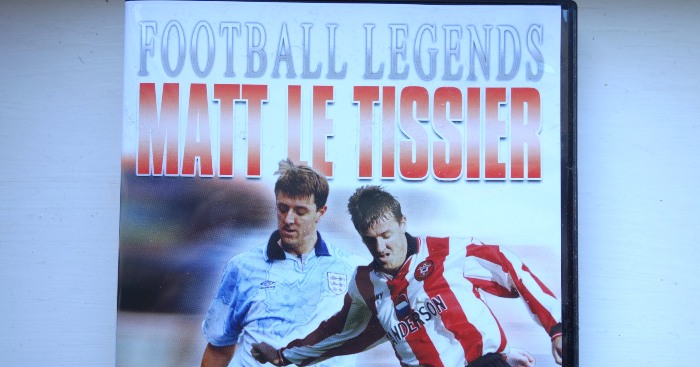 “Transparently the best player of our times” – David Baddiel

“Right at the top of the tree” – Jason Dodd

There’s a Matthew Le Tissier DVD called ‘Unbelievable’, narrated by David Baddiel, with intro music of the same name by 90’s dance act EMF. You’d think it’s a bit of an overblown title as the video’s first chapter takes in Le Tissier’s sedate formative years in Guernsey, homesick on trial at Oxford and living in lodgings in Southampton as a Saints youth where all he ate was egg and chips.

Then, when he joined Southampton, an early double in 1986 v Man Utd to see Ron Atkinson sacked, a hat-trick in the snow v Leicester with the plummy commentator calling him Le Teeeesier. You come to hear all the pronunciations over the years as he doesn’t stop scoring: Le Tizzier and Le Tissia the soundtrack to the crumpled keeper. Le Tissier’s out-takes are akin to standout goals of lesser players’ careers.

Le Tissier – critiqued for his less-than-total work rate but with the kind of innate skill that illustrates that a lot of professional footballers aren’t actually that good at football.

You might not even know the best goals, lost in a stream of net-busters while the Guernsey genius was taking the piss in the Premier League, winning multiple player of the season awards, scoring 30 Premier League goals from midfield and somehow overlooked for England squads for major tournaments in 1990, ’92 and ’96. “Creatively the number 1 attacking player in the country”- yeah I’m looking at you Glenn Hoddle.

Matt Le Tissier scored some amazing goals during his career!pic.twitter.com/tjKN6sLsMW

Le Tissier would stroke in goals that the try-hards of his era would practise in training but Le God would do it off the hoof in front of 15k at the Dell.

I’ve picked out the best for you. Seek them out. Feed your soul. The goals that gave the Saints fans the best limbs the early 90’s ever saw. As good as a night out in Le Tissier’s nightclub Celebration Plaza. Yes – that good.

Southampton v Wimbledon 26/2/94
Some would call this self-served flicked up free-kick from 25 yards into the top-right corner ‘audacious’ but for Le Tiss it was nonchalant. Debonaire in the Dimplex Saints top, Matthew receives a square free-kick 25 yards out, flicks it up and lashes with the outside of his foot in to the Wimbledon top corner. Cue Simon Charlton and Jeff Kenna trying to touch Le Tissier in the celebration to rub off some of the magic. A kiss from Jim Magilton and a fan in the crowd clapping with his hands outstretched as if reaching for the heavens. There was no need as Le God was in attendance.

Liverpool v Southampton 30/10/93
Le Tissier’s waiting for the flick-on from Dowie after a long punt forward. He’s still outside the box with everything to do and Mark Wright encroaching. No bother for Le Tiss, who knocks the ball over the head of No. 5 Wright, who’s left bewildered like an interrogation subject who’s just had the hood removed. Le Tiss cradles the dropping ball, turning Wright inside out before knocking the ball home on the angle past Grobbelaar. Robbie Fowler was the talk of the town but Le Tiss reminds everyone who the master is. Right foot, left foot, he did it because he could.

Southampton V Gothenburg friendly 31/1/94
No-one knows why Southampton were playing a friendly v Swedish club Gothenburg in the middle of the 1993-94 season. Le Tiss probably doesn’t know why either, he just turned up and scored a goal of pure technique that was in from the first touch. Just outside the box, he chops across the ball, sending a volley goalwards with his head in line with the corner. Knowing it’s in, Le Tissier just walks away, job done. A momentary hand up in celebration.

It’s easy to get caught up in the bells and whistles of Le Tissier’s many worldies but this one takes it for the simple ball mastery he perfected.

94/95 was the season Le Tissier became otherworldly, his strikes that season elevated to more than goals; they became intergalactic energy that left a Villa fan with his head in his hands after a right foot take swept into the Villa top corner from 35 yards.

The Blackburn one left Tim Flowers folded up and discarded like a beer garden deckchair on a Sunday morning, unsure of what just happened. All these years later we’re not sure either.