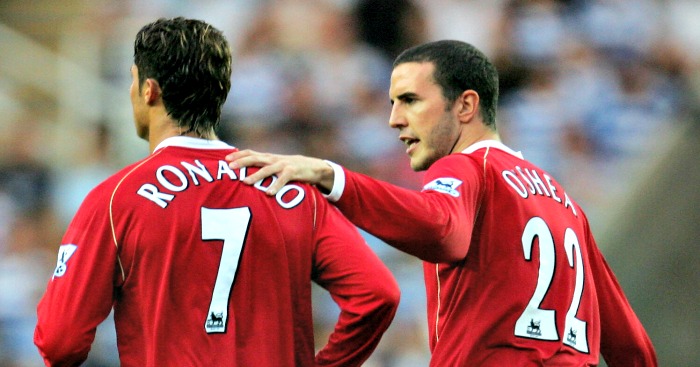 John O’Shea suggests the story of how Manchester United came to sign Cristiano Ronaldo is not quite how it has been told.

Sir Alex Ferguson was convinced he must sign Ronaldo from Sporting Lisbon after the winger impressed in a pre-season fixture against the Red Devils in 2003.

In his 2013 autobiography, Ferguson recalls telling United chief executive Peter Kenyon he must sign the then 17-year-old, adding a beleaguered O’Shea “ended up with a migraine” while marking Ronaldo.

O’Shea was then the subject of taunts from his team-mates, but the Sunderland captain has moved to set the story straight.

“We flew back from a tour of America and straight to Lisbon with severe jet-lag,” he told ESPN. “Normally everyone wants to play games, but on this occasion everybody had had a terrible nights’ sleep before the game, waking up at two, three, four in the morning wide awake and not able to get back to sleep.

“So everyone was not, shall we say, in ‘peak’ condition for the game. Some boys were delighted when the boss announced the team and they weren’t starting!”

“On to the game and I’m starting right-back. Just before the game kicks off, I look up and a young Ronaldo is staring straight at me.

“He’s there and full of concentration, ready to go.

“Now in some books written by former colleagues, there have been some highly exaggerated stories, and believe it or not, about how much ‘Ronnie’ went past me time after time, and ripped me apart!

“My version would be different, but he did have an excellent game.

“At one stage, I remember looking at the dugout when the ball had gone out for a throw-in and some of the lads on the bench were having a good laugh, thinking that’s the last thing you need when jet-lagged — a young lad wanting to run at you time and time again, going left, going right, twisting turning, shooting every time he got within distance of the goal.

“But in a roundabout way, I take it as a compliment that the boss wanted to sign Ronaldo so quickly after the game, because of how he had performed against me that night.

“He wanted him to join straight away rather than staying on loan at Sporting Lisbon for another year to develop.

“I believe the deal was in place for Ronaldo to stay in Lisbon and then come to Manchester the following season, but after his display of skill and maturity on the night, the boss made sure we didn’t leave Lisbon without him, he was ready.”