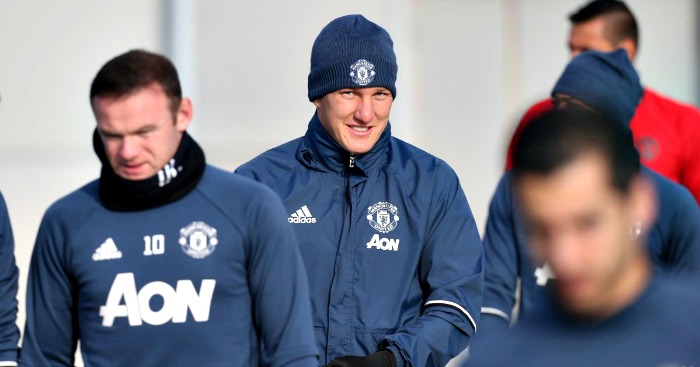 Bastian Schweinsteiger has returned to first-team training with Manchester United.

Schweinsteiger has been frozen out of the first-team picture by United manager Jose Mourinho this season, despite featuring regularly when available under Louis van Gaal.

The German has not made a single matchday squad in any competition under Mourinho, and has been forced to train either alone or with the reserves and youth team.

It was even claimed on Sunday that Mourinho had blocked Schweinsteiger from playing for the Under-23s, such was his standing in the squad.

However, United published exclusive pictures of the World Cup winner training with the first-team squad on Monday, following the weekend draw with Burnley.

Despite not being named in the club’s 25-man squad for the Europa League earlier this season, the midfielder was pictured training ahead of the upcoming clash with Fenerbahce on Thursday.

Back to work for #MUFC! pic.twitter.com/laCEkCnqOc

It is not yet known whether Schweinsteiger will be considered for first-team selection.