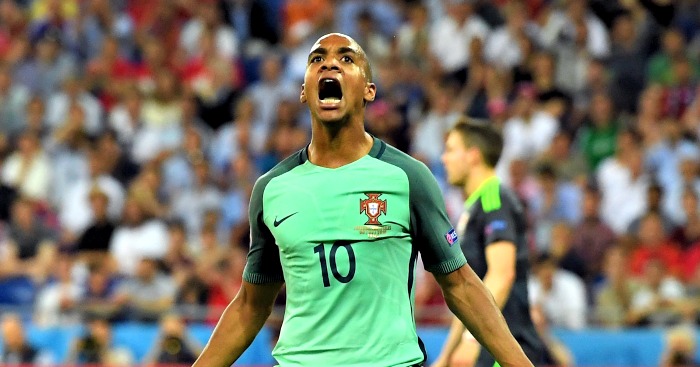 Joao Mario has refused to discuss rumours surrounding a move to Manchester United or Inter Milan.

The Sporting Lisbon midfielder is currently starring at Euro 2016 with Portugal, and is expected to start in the final against France on Sunday.

He has started all but one of Portugal’s six games so far this summer, and his performances have merely intensified speculation over a transfer.

Manchester United were heavily linked with the 23-year-old ahead of the tournament, as his agent, Jorge Mendes, also works with current Reds manager Jose Mourinho.

Inter have emerged as potential contenders for his signature, but, when asked on his future, Joao Mario dismissed the questions.

“[It’s] two days away from playing a final – my only focus is on playing this final,” he said. “My future is only [the next] two days – to the European Championship final.”

Portugal have been criticised for their defensive style so far this tournament, and have won just one match in normal time – against Wales in the semi-final.

“Critics are a part of football,” he continued. “We don’t care about them. We don’t want to win to have our revenge, we want to win for the fans.

“The key is believing, [to] never stop believing, correcting mistakes, keeping strong, [staying] together even in the not so good moments, like in [the] group stage.

“Keeping solid, we were very happy to qualify. We believe in our colleagues next to us – this is the spirit that brought us here.”