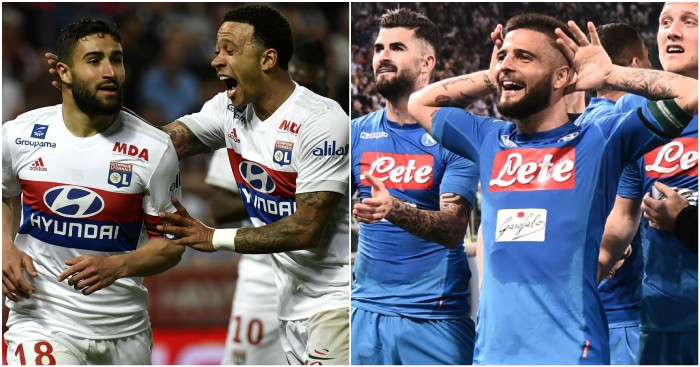 While most of Premier League’s issues are close to being sorted, that isn’t case the case in Europe’s other major leagues. Except La Liga…

Germany’s falling giants
With three games to go, there is a gaggle of big clubs sh*tting themselves at the foot of the Bundesliga.

Cologne, who finished fifth last season and qualified for the Europa League, are eight points adrift at the bottom and appear doomed. Their demotion can be confirmed this coming weekend when they face Freiburg, who themselves are deep in the mire. They have taken two points from the last 24 to slide into the relegation play-off place and sit tied on 30 points with Mainz and Wolfsburg, who themselves were runners-up three years ago but had to go through the agony of the relegation play-off last season.

Hamburg would happily settle for 16th spot and a two-legged play-off for the chance to preserve their Bundesliga status. As it is, they are five points adrift and though they have showed signs of recovery, winning two and drawing one of their last four since sacking Bernd Hollerbach just two months after he was appointed, making up a five-point deficit appears a tall order. Relegation would bring an end to their status as the only club never to have been relegated from the Bundesliga and would stop the digital clock in the north-west corner of the Volksparkstadion that records each second of their top-flight status.

Hamburg’s meeting with Wolfsburg this coming weekend is huge for both sides. That takes place at the same time Freiburg face rock-bottom Cologne. The relegation picture could be a lot clearer by this time next week. Or not…

Leipzig’s charge falters
Only two wins in their last nine appears to have done for RB Leipzig’s Champions League qualification hopes. They went to Bayern Munich at the end of October with the winner taking top spot. Bayern triumphed and they haven’t looked back since.

Leipzig, though, dropped to sixth at the weekend after being leapfrogged by Hoffenheim as a result of their 5-2 thrashing by Julian Nagelsmann’s side. That also left Bayer Leverkusen with a two-point cushion in fourth, following their 4-0 whipping at the hands of third-placed Borussia Dortmund, who themselves are trying to make up a two-point deficit to Schalke in second.

Leipzig and Hoffenheim will also be keeping an eye on what’s happening below them, where Eintracht Frankfurt could still take a Europa League place, though having only won one of their last five, their form does not suggest a challenge.

Old Lady stumbling
The only title race left to run throughout Europe’s big leagues takes place in Serie A, where Napoli made massive strides on Juventus.

The Old Lady could have gone seven points clear with four games to go had they triumphed in the meeting of the top two at home on Sunday. Instead, the visitors won in the 89th minute to close to within a single point. Their mentality was tested by the manner of their Champions League exit and Napoli have turned the screw again on Juve as they enter the final straight.

Inter chasing Roman rivals
Juve and Napoli would have to squint in their rear-view mirror to see a three-way fight taking place for the final two Champions League spots.

Roma and Lazio are third and fourth respectively, though Inter remain only a point behind. If they are to stay in hot pursuit, they will have to do Napoli a huge favour in Saturday night’s Derby d’Italia against Juve at the San Siro.

Inter’s city rivals AC Milan saw their Champions League hopes extinguished when they fell to rock bottom Benevento for the second time this season. The honeymoon is certainly over for Gennaro Gattuso after five draws and a couple of defeats from their last seven league matches have left them a point behind Atalanta in the race for the final European spot.

Despite beating Milan, Benevento’s relegation was confirmed on Sunday when Crotone dropped SPAL into the relegation play-off place. At least SPAL hold a four-point lead over second-bottom Hellas Verona, though that will probably change this weekend when the two sides meet. Defeat would leave Hellas Verona needing to make up a seven-point deficit with only nine available.

Little to play for in La Liga
La Liga looks a lot like the Premier League. Barcelona may not be crowned champions yet like Manchester City, but they need only wait another week.

Barca will travel to Deportivo La Coruna, who are the Spanish Southampton – four points adrift in the final relegation place with four games to go. Levante are the only club Deportivo can feasibly catch as they look to avoid slipping into Serie B with already-doomed Las Palmas and Malaga.

Like the Premier League, the top four look secure in their Champions League places, with fourth-placed Valencia retaining a 10-point cushion over Real Betis with 12 left to play for.

All to lose in Monaco
At least in France, where PSG are 20 clear at the top of Ligue 1, there is a battle raging for the final Champions League spots.

The top two qualify for the group stages, while third spot offers a path into the Champions League qualifiers. One of Monaco, Lyon or Marseille are probably going to be disappointed.

Monaco currently sit in second, though they are only a point clear of both rivals and their form has to be a huge concern for Leonardo Jardim, who watched his side follow their 7-1 mauling at the hands of PSG by losing 3-1 to mid-table Guingamp.

Lyon, in contrast, are flying. Having not won in half a dozen matches, they have since won their last six, scoring 13 goals in the last three.

Marseille also have the distraction of their Europa League semi-final, though winning that competition would bring with it a Champions League spot, so there is a way in which everyone can be satisfied.

Troyes in trouble
Things are equally tight at the bottom of Ligue 1. Troyes managed to climb a place this weekend, despite having lost for the seventh time in nine matches. Lille’s 5-1 thrashing by Marseille saw them drop into the second of the automatic relegation spots, though Troyes’ wretched form and the fact they have to face both Monaco and Lyon offers Lille some encouragement.

Bottom-placed Metz are only three points off Lille and Troyes following a run that has seen them lose only one of their last five. Above the bottom three, Toulouse might be looking nervously over their shoulder because while they have a four-point advantage and a game in hand, they haven’t won in seven matches.