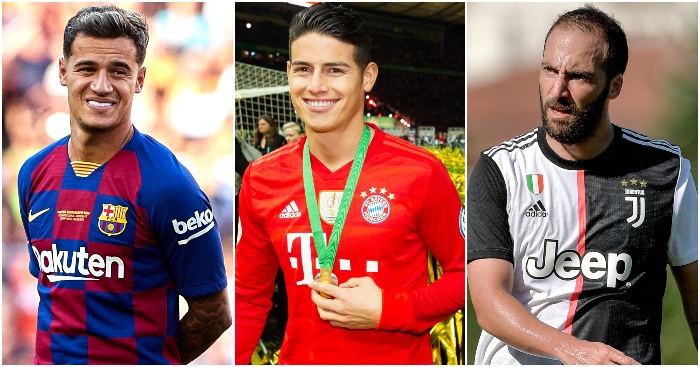 13) Eliaquim Mangala (£31.8m)
The France defender, who still has more caps than Aymeric Laporte (that said, Boris Johnson has as many France caps as Laporte), was the most expensive defender in British football when he joined Manchester City from Porto in 2014. Some reports subsequently put the fee at £42million owing to the structure of his ownership with Porto.

“I think he will prove to be a great signing for us,” said mystic Manuel Pellegrini upon the centre-back’s arrival. The reality, though, was that Mangala was not fit to fill Joleon Lescott’s boots. Pep Guardiola shipped him off to Valencia, where Mangala went some way to rebuilding his reputation, but another loan spell at Everton never got started because of injury.

City finally got shot this summer when Valencia gave him another go. In one way, it was a massive loss.

12) Robinho (£32.5m)
“On the last day, Chelsea made a great proposal and I accepted,” said Robinho at his surprise unveiling as a Manchester City player in September 2008. When a reporter replied, querying whether he “meant Manchester”, the Brazilian answered: “Yeah, Manchester, sorry!”

11) Radja Nainggolan (£33m)
Last summer, Inter took the Belgium midfielder – though he had just retired from international football after failing to make the World Cup squad – in an agreement worth around £33million. Roma were paid £21m while Davide Santon and Nicolo Zaniolo were also chucked in to sweeten the deal.

A year later, the 31-year-old was on the move again after being told by Antonio Conte that he was “out of the project” at Inter. Nainggolan had offers but opted to return to Cagliari, where he spent four years prior to joining Roma in 2014.

While Nainggolan was stinking out the San Siro, Zaniolo was establishing himself as one of the hottest properties in Europe. Smooth move, Inter.

10) Andy Carroll (£35m)
Andy Carroll has been loaned out twice in his career. On the first occasion, he was a wiry, short-haired 18-year-old sent to develop at Championship Preston in August 2007. The second time, he had grown a ponytail, bulked up somewhat, and was headed to Premier League West Ham. Oh, and he was now a £35million footballer.

9) Danny Drinkwater (£35m)
Deadline day in summer 2017 was an absolute turkey for Chelsea. They spent a combined £58million to land Drinkwater and Davide Zappacosta, while Ross Barkley chucked a custard pie in their direction before changing his mind a few months later.

“He is a typically combative English midfielder with a cultured passing technique and his arrival significantly strengthens our midfield options,” said Michael Emenalo of Drinkwater’s arrival.

Drinkwater played 12 Premier League games for Antonio Conte, which was plenty of time for the Italian to suss the former Leicester star. Maurizio Sarri made it crystal clear that he could leave a year after signing but Drinkwater chose to hang around and pocket his £1000,000 a week for minimum effort. Even this summer when he left for a loan spell Burnley on deadline day, you get the impression he hardly went willingly.

8) Tiemoue Bakayoko (£40m)
Most of us got Bakayoko wrong, When he signed for Chelsea from Monaco in summer 2017, just before Drinkwater followed, it was widely expected that the all-action defensive midfielder would be a huge hit in the Premier League. And he made a decent start. But come October when N’Golo Kante picked up an injury, Bakayoko’s shortcomings were thrust into sharp focus.

The nadir came in February at Watford. Bakayoko was sent off for a couple of cautions inside 30 minutes and Antonio Conte’s side were beaten 4-1. The midfielder returned a month later against Leicester but received the half-time hook to avert another dismissal. Conte’s trust and patience was gone and Bakayoko’s performances left Maurizio Sarri in no doubt what to do when he arrived last summer.

Specifically, that was to ship Bakayoko off to AC Milan. After a ropey start, the midfielder offered some hope that he wasn’t a lost cause. Indeed, when he returned to Chelsea, Frank Lampard offered him a clean slate. But a couple of friendlies was all it took for Lampard to reach the same conclusion as Conte and Sarri; Bakayoko is currently sat at Stamford Bridge praying for another loan move before September 2.

7) Fernando Torres (£50m)
But Liverpool only ever paid £35million for Carroll because Newcastle knew their pockets were about to swell. Chelsea paid a whopping then-British record £50m to sign Fernando Torres from the Reds in January 2011, and every club on the planet knew they could hold Kenny Dalglish’s side to ransom over his replacement.

6) Radamel Falcao (£51m)
Most clubs spend an increased amount of money upon promotion, but Monaco went a little further than the norm. First they signed James Rodriguez and Joao Moutinho in a combined £60m deal from Porto, then followed that by prising Radamel Falcao from Atletico Madrid for £51m. The trio are not a patch on Aaron Mooy and Steve Mounie, mind.

Falcao continued his remarkable form in France, scoring 11 goals in his first 19 games. But the striker suffered a season-ending knee injury in January 2014, and would never be the same again. The Premier League felt as though it could rehabilitate him however, with first Manchester United and then Chelsea signing him on loan in successive seasons. It did not go well, but he’s enjoying life rather more now.

And to continue the laborious metaphor, Pep Guardiola then lent the rather expensive Zlatan-mobile to a mate. Ibrahimovic’s move to Barcelona never sat quite right for any of the parties involved, particularly not when the Spanish side paid Inter Milan £40m and sent Samuel Eto’o the other way as part of the deal. As if that was not enough, Inter would dump Barcelona out of the Champions League in the semi-finals that season, before going on to lift the trophy themselves.

4) Alvaro Morata (£58m)
The Spain striker was very much Chelsea’s second choice in summer 2017, when Conte really wanted Romelu Lukaku to replace Diego Costa, but the Everton striker went to Manchester United instead. Morata never really offered the impression that he felt that he belonged at Chelsea, nor did he give the Blues much reason to make him feel wanted.

The former Real Madrid and Juventus striker started well, netting six in six before the goals dried up. He managed just four more before the end of 2017 and only one in the new year.

Morata became more renowned for the chances he missed more than those he put away. And his demeanour like that of a permanently slapped arse contrasted sharply with Costa’s no-nonsense, take-no-prisoners approach to goalscoring. When the chance came last winter to return to Madrid with Atletico, initially on loan, Morata jumped at the opportunity. And when Atletico suggested they might give Chelsea their money back, the Blues wasted no time agreeing to the deal either.

3) James Rodriguez (£63m)
Gareth Bale. Cristiano Ronaldo. Luis Suarez. There concludes the comprehensive list of players who were more expensive than James Rodriguez upon his arrival at Real Madrid in summer 2014. The Colombian had shone at the World Cup; his reward was status as a Galactico.

When the time came this summer for Bayern to sh*t or get off the pot, the Bundesliga side pulled up their trousers and moved on.

2) Gonzalo Higuain (£75.3m)
Higuain became the third most expensive player of all-time in 2016 when Juventus forked out the £75.3million required to buy him out of his Napoli contract. Few doubted it was a savvy move. The season before, Higuain notched 36 league goals in 35 games for Napoli.

Two years and 55 goals in 105 games for Juventus later, last summer, the 30-year-old was deemed surplus to requirements. Harsh, perhaps. But that’s what happens when Cristiano Ronaldo rocks up to take your place.

Chelsea were heavily linked with a permanent move for Higuain but the ex-Real Madrid striker opted to stay in Italy with AC Milan on a try-before-you-buy deal. He tried, they didn’t buy. Instead, his loan to Milan was cut short and Higuain was dispatched to Chelsea mid-season on a similar deal with a similar outcome. He remains at Juventus.

1) Philippe Coutinho (£142m)
‘He has played a total of 75 games as a blaugrana in which he has scored 21 goals and provided 11 assists,’ read the Barcelona statement announcing Coutinho’s year-long loan to Bayern Munich, thanking him for his ‘commitment and dedication’. That doesn’t really tell the whole story, does it?

Coutinho’s dream move to Barca quickly became a nightmare which has taken a season and a half to wake up from. The £142million price tag and the burden of expectation that came with being Neymar’s replacement proved too heavy for the Brazilian to bear.

Why did it go so wrong? Some put it down to his digs. The four previous tenants of his Castelldefels villa: Andre Gomes, Thomas Vermaelan and Cesc Fabregas. Aye, that’ll be it