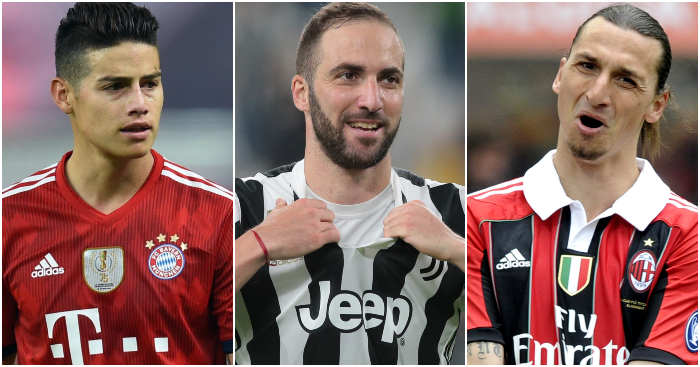 8. Andriy Shevchenko (£30.8m)
Jose Mourinho never wanted him. By Andriy Shevchenko’s own admission, it was Chelsea owner Roman Abramovich whose “persistence” tempted him to move to Stamford Bridge. On this occasion, the manager knew best.

Shevchenko scored nine goals in 47 Premier League appearances, his pace and his touch deserting him as he was already arguably past his peak years when he joined. But it was not until Luiz Felipe Scolari was appointed manager that the Ukrainian was shown the door at Chelsea. Former club Milan welcomed him back on loan in August 2008, before one of the great palindromic careers in history was completed as he returned to Dynamo Kyiv a year later.

7. Robinho (£32.5m)
“On the last day, Chelsea made a great proposal and I accepted,” said Robinho at his surprise unveiling as a Manchester City player in September 2008. When a reporter replied, querying whether he “meant Manchester”, the Brazilian answered: “Yeah, Manchester, sorry!”

6. Andy Carroll (£35m)
Andy Carroll has been loaned out twice in his career. On the first occasion, he was a wiry, short-haired 18-year-old sent to develop at Championship Preston in August 2007. The second time, he had grown a ponytail, bulked up somewhat, and was headed to Premier League West Ham. Oh, and he was now a £35million footballer.

5. Fernando Torres (£50m)
But Liverpool only ever paid £35million for Carroll because Newcastle knew their pockets were about to swell. Chelsea paid a whopping then-British record £50m to sign Fernando Torres from the Reds in January 2011, and every club on the planet knew they could hold Kenny Dalglish’s side to ransom over his replacement.

4. Radamel Falcao (£51m)
Most clubs spend an increased amount of money upon promotion, but Monaco went a little further than the norm. First they signed James Rodriguez and Joao Moutinho in a combined £60m deal from Porto, then followed that by prising Radamel Falcao from Atletico Madrid for £51m. The trio are not a patch on Aaron Mooy and Steve Mounie, mind.

Falcao continued his remarkable form in France, scoring 11 goals in his first 19 games. But the striker suffered a season-ending knee injury in January 2014, and would never be the same again. The Premier League felt as though it could rehabilitate him however, with first Manchester United and then Chelsea signing him on loan in successive seasons. It did not go well, but he’s loving life now.

And to continue the laborious metaphor, Pep Guardiola then lent the rather expensive Zlatan-mobile to a mate. Ibrahimovic’s move to Barcelona never sat quite right for any of the parties involved, particularly not when the Spanish side paid Inter Milan £40m and sent Samuel Eto’o the other way as part of the deal. As if that was not enough, Inter would dump Barcelona out of the Champions League in the semi-finals that season, before going on to lift the trophy themselves.

2. James Rodriguez (£63m)
Gareth Bale. Cristiano Ronaldo. Luis Suarez. There concludes the comprehensive list of players who were more expensive than James Rodriguez upon his arrival at Real Madrid in summer 2014. The Colombian had shone at the World Cup; his reward was status as a Galactico.

1. Gonzalo Higuain (£75.3m)
Higuain became the third most expensive player of all-time in 2016 when Juventus forked out the £75.3million required to buy him out of his Napoli contract. Few doubted it was a savvy move. The season before, Higuain notched 36 league goals in 35 games for Napoli.

Two years and 55 goals in 105 games for Juventus later, the 30-year-old is deemed surplus to requirements. Harsh, perhaps. But that’s what happens when Cristiano Ronaldo rocks up to take your place.

Chelsea were heavily linked with a permanent move for Higuain but the ex-Real Madrid striker has opted to stay in Italy with AC Milan on a try-before-you-buy deal. After a season-long loan, the Rossoneri have the option of paying £32million next summer, at which point there would still be two years left on the initial contract he signed with Juventus.