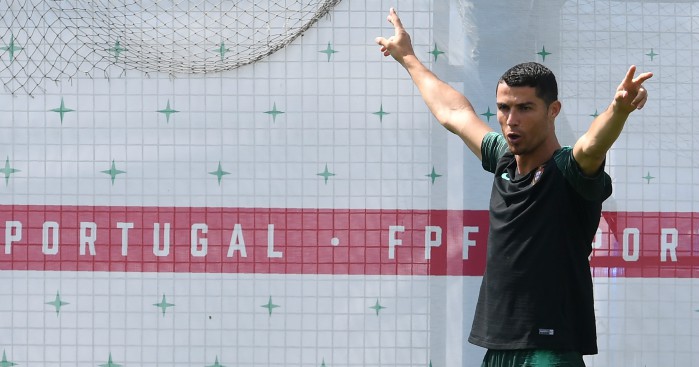 Oscar Tabarez will task his whole Uruguay team with stopping Cristiano Ronaldo after admitting no one player can shackle Portugal’s dangerman in their last-16 clash.

Uruguay have reached the World Cup’s knockout phase as the only nation yet to concede a goal, though that record is likely to come under serious threat when they face Ronaldo in Sochi.

Only Harry Kane has scored more in Russia than the 33-year-old, whose form has been so good that Donald Trump even asked his Portuguese counterpart if Ronaldo would ever run for president during a White House visit this week.

Ronaldo is likely to come up against arguably the strongest centre-back pairing at the tournament in Atletico Madrid duo Diego Godin and Jose Maria Gimenez; both Godin and Ronald are in our team of the tournament so far.

However, Tabarez insists neither man is capable of handling Ronaldo on their own.

“I believe that Cristiano Ronaldo is one of the best strikers in the world,” the Uruguay coach told a pre-match press conference.

“What Ronaldo has on top of all of these qualities is that he’s the leader of that team. That is an additional factor.

“There’s not a single player who can contain him. Not just Godin. We will have to work collectively in order to try and limit the effect that he can have.”

How Godin and Gimenez fare against Ronaldo is one of the intriguing subplots surrounding this fixture, though both sides’ defensive records have some fearing a dull contest.

After their 3-3 draw with Spain in their opening World Cup game, Portugal have not conceded a goal from open play and they shipped just one in their four knockout games at Euro 2016.

Asked whether Saturday’s contest with Uruguay could be “boring”, Portugal boss Fernando Santos told a press conference: “No, I don’t think so.

“I think it’s going to be a great match. Two teams are going to try and win – each team using their weapons.

“I hope it’s going to be a great clash between these two teams because it’s very different from the group stages – either you win or you lose. Portugal wants to win.”

Tabaraz, meanwhile, is not concerned with the level of entertainment.

“I don’t know what the match will be like,” he said. “Maybe you are worried that it might start being boring; we don’t even think about that. We’re there to win.”

Despite the high-stakes nature of the fixture, Tabaraz has reported his camp is a relaxed one having been impressed by what he has seen in Uruguay’s victories over Egypt, Saudi Arabia and Russia.

“The last three matches we’ve started showing what we’re trying to achieve and it’s become apparent on the pitch,” he said.

“I believe that we are closer than ever to achieving our real objectives. We want to achieve this at the World Cup.

“Above and beyond the importance of the match – what it means to win or lose – I think we have a certain calmness and serenity in terms of facing it.”