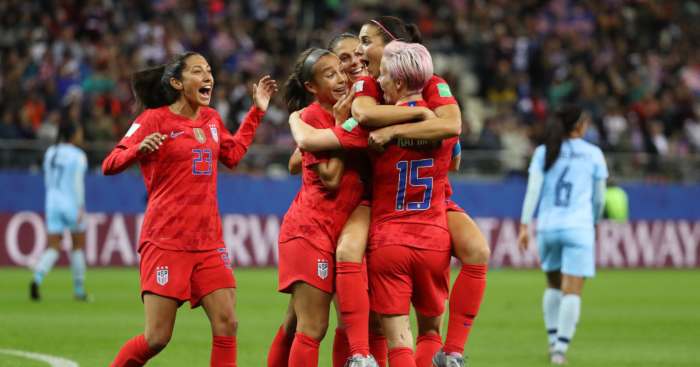 United States boss Jill Ellis stressed the need to “play as hard as we possibly can in every single game” after the record-breaking 13-0 win against Thailand in Reims.

The US opened their Women’s World Cup title defence by registering the biggest win in the history of the competition, bettering Germany’s 11-0 victory over Argentina in 2007.

Alex Morgan netted five times, while there were braces for Rose Lavelle and Sam Mewis. Lindsey Horan, Megan Rapinoe and substitutes Mallory Pugh and Carli Lloyd also got on the scoresheet.

When asked in her post-match press conference about the scoreline reaching “embarrassing levels”, Ellis, whose side scored 10 times in the second half, said: “This is a world championship so every team here has been fantastic to get to this point.

“I think to be respectful to opponents is to play hard against them. And it’s a tournament where goal differential is a criteria.

“Games are games and you have to go out and play, and compete, and a lot of this is about building momentum.

“As a coach I don’t find it’s my job to go and harness my players and rein them in, because this is what they’ve dreamt about, a world championship.

“I respect Thailand, I celebrate that they are here. I spoke to some of the players afterwards and (said) keep your heads up because this is part of the growth of the game.

“It is about mentality, it is about confidence, and so getting off on the right foot is important.

“We also believe we have more to do. No doubt, we’re going to stay humble and we go back to work. But it was a very good start.”

Ellis was then asked if she thought there were teams that have a “fear factor” when it comes to the US.

“If you can get as many players hot as you possibly can, feeling good, feeling the back of the net, that’s so important. Those feelings are what can help you through the tournament.

“I think we have to come out and play as hard as we possibly can in every single game. This will be an incredibly hard World Cup and this is only game one.”

Ellis added: “Look at Alex. You want those players to have those feelings because then they go into games. It’s feeling the mentality, feeling invincible, that’s the feeling you want.

“I’m not saying a big result like this is the be all and end all but it lights a little bit of a fire in terms of their confidence, for sure.”

“We accept they are very strong and they were excellent all around. We accept our mistakes and we are going to improve.”