Home Mediawatch Utter nonsense about Manchester United and City within… 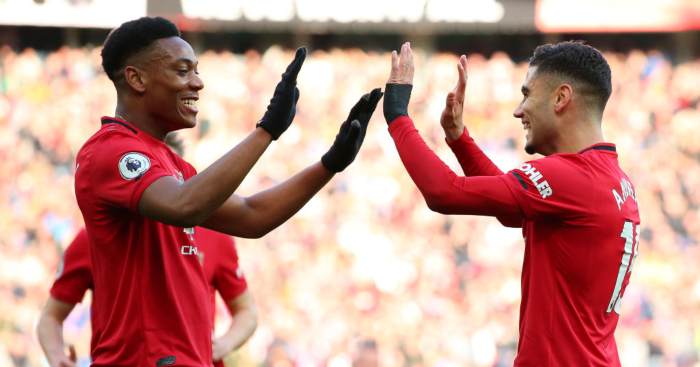 Dear Stan…
Any Manchester United fans who have the nerve to be happy with Sunday’s win over Brighton are in for a crash back down to earn as Stan Collymore has some words of caution in the Daily Mirror. They are also words of nonsense but this is what happens when a man ‘always speaks his mind’.

‘The fact Brighton had significantly more possession than their hosts tells you that, while United have undoubted talent with which they can hurt you, against better teams their lack of ball retention will come back to bite them.’

Alternatively, what it tells you is that Manchester United – an excellent counter-attacking team – are rather more dangerous when they have less of the ball. They beat Brighton with 43% possession but lost to Bournemouth last week with 57% of the ball.

The good news for United is that the ‘better teams’ tend to have more of the ball, hence why they have beaten Chelsea 4-0 with 46% possession, beat Leicester 1-0 with 42% possession and drew 1-1 with Liverpool at Old Trafford with 32%.

What Stan Collymore has managed to describe is the exact opposite of Manchester United’s problems. Which is almost impressive. But he hasn’t finished yet:

‘It was a solid result but, in modern football, United have to learn that possession is nine-10ths of the law.’

Which is presumably why Manchester City – with by far the highest average possession in the Premier League – are top of the table, especially after enjoying 55% at Anfield on Sunday.

He also has lots to say on Arsenal and how the only reason that they might sack Unai Emery is because he speaks funny.

‘I fear Unai Emery’s accent could end up getting him the sack at Arsenal rather than his ability to manage a football club.’

That’s an almost spectacular avoidance of the point, Stan. We suspect that the only reason anything at all is being said about Emery’s accent is because Arsenal are a bit sh*t at the moment. Nobody was mocking him this time last year.

‘Emery, a man taking on Arsene Wenger’s soft-touch, soft-centred Gunners, is managing a team which is where it should be in the table and yet people are still gunning for him.’

Hands up if you think Arsenal ‘should’ be below Sheffield United, eight points off a Champions League place, just two points better than Newcastle and with exactly half the points of Liverpool.

Just you then Stan.

Not defending the indefensible
Mediawatch’s eye was drawn to the headline in the Daily Mail of ‘Finding defenders who can defend is once again…Guardiola’s blind spot’, largely because this is a piece about back-to-back Premier League champions who conceded just 50 goals in 76 games. It’s unlikely that City produced that ridiculous defensive record without some defending from their defenders.

And the headline is not misleading; this is such nonsense from Ian Herbert that it could have come from the mouth of Stan Collymore.

He begins by being perplexed that Pep Guardiola is never angry about poor defending, because famously, screaming at footballers about making defensive mistakes is definitely the way to make them cut out those defensive mistakes.

‘Delve into Guardiola’s past, though and it is very hard to find any explosion about defensive inadequacies, which generally get exposed at the business end of the season.’

They ‘generally’ do, do they?

Like in 2017/18, when City lost just one of their final 15 Premier League games and shipped 11 goals in the process. Exposed.

Or in 2018/19, when City won every one of their final 14 Premier League games and shipped four goals in the process. Exposed.

Seriously, does nobody dare edit the Deputy Chief Sports Writer of the Daily Mail?

Herbert then goes on to detail how City tried to turn Fabian Delph into a defender before they sold him to Everton, ‘where he is now back in midfield’. As if that proves it was a ridiculous idea.

He describes a ‘fleeting excitement’ about Delph as a full-back, which rather downplays 20 Premier League starts in a record-breaking, title-winning season in favour of this narrative about Guardiola not being in the slightest bit bothered about defence.

‘They then spent £58.8m on Juventus’ Joao Cancelo, who has been eclipsed by Oleksandr Zinchenko, a converted midfielder, who was free to leave for Wolves 18 months ago.’

Where to even start with this? With Cancelo being primarily a right-back, so cannot really be ‘eclipsed’ by a midfielder converted into a left-back. Or with Zinchenko being exactly the right example of a player who has been coached into being a full-back for a title-winning side.

‘When it comes to acquiring defenders, the track record of City’s director of football Txiki Begiristain has been weak. Eliaquim Mangala (£42m), Otamendi (£40.1m), Martin Demichelis (£4.5m) and Stefan Savic (£10.8m) have been varying shades of poor.’

The signing of Savic pre-dates Begiristain and the cheap signing of Demichelis was a masterstroke as City won the title in 2013/14. And while Nicolas Otamendi can be erratic, he was a member of the PFA Team of the Year in 2017/18, so we will not be too quick to shove him onto the shit pile with Mangala. Still, one out of four ain’t bad, Ian.

And we think you might agree that double title winners Aymeric Laporte and Kyle Walker have not been bad signings. Oddly, there is little mention of either in Herbert’s piece.

It’s almost like they did not fit into his ridiculous narrative.

Shout it from the rooftops
The Daily Mirror’s Chief Football Writer John Cross could not have picked a worse day to run his interview with Gareth Southgate that claims the England manager’s role is no longer a ‘poisoned chalice’ or ‘the Impossible Job’.

Apparently, ‘Southgate’s revolution has made it enjoyable again’.

Just a few hours later Cross was writing that England’s players were ‘unhappy with Southgate’ over his treatment of Raheem Sterling after he clashed with Joe Gomez on Monday. Apparently, they think there has been an ‘overreaction’ by Southgate, who might well be starting to think this is an impossible job after all.

In the red corner…
How the Liverpool Echo and Liverpool.com reported the bust-up:

Or alternatively, one man acted like a bit of a div and it ‘exposes’ and ‘shows’ nothing at all.

Grip it up and start again…
On Monday, Arsenal head of football Raul Sanlehi and managing director Vinai Venkatesham addressed 200 members of the Gunners’ staff and told them that they “believe Unai is the right man for the job”.

The actual phrase used? “We are working behind the scenes to turn things around – and we are confident we will.”

Note the three uses of the word ‘we’ and what has been described as “100 per cent support” for manager Unai Emery.

So what is the headline on the back page of The Sun?

‘Boss Unai told to get a grip.’

We despair. The man wasn’t even bloody there when this ‘warning’ was issued.

Unconditional love
The author of the above is of course miserable Mark Irwin, who acknowledges the official line from Arsenal that they back Unai Emery but then wisely caveats that the ‘backing is not unconditional’.

What’s in a name?
According to The Sun, Neil Warnock ‘gloried in the nickname of ‘The Warlock”.

As you were…
The Daily Mirror bring us a back-page exclusive that ‘Peter Beardsley has been snubbed by the FA as England prepare for their 1000th match celebrations at Wembley’.

Yep. Come back to us when the FA do celebrate the achievements of a man serving an FA suspension after being found guilty of racially abusing young black players.