Home Home Page Front Page Valencia are Spain’s Arsenal…and they are back, back, back 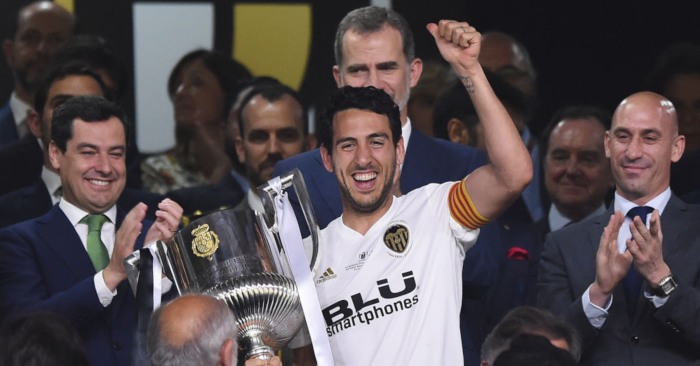 Valencia CF are very much the Arsenal FC of Spain. Both are sleeping giants who last won the league title in 2004, came agonisingly close to Champions League triumph in the 2000s, fell on harder times and were forced to sell off several of their best players.

Like Arsenal, Valencia have suffered an extended trophy drought in recent times. The Gunners famously went nine years without any silverware between 2005 and 2014, while the last addition to the trophy cabinet at Mestalla came in 2008.

At least, that was the case until Saturday night, when Valencia’s impressive 2-1 victory over heavy favourites Barcelona in the Copa del Rey final in Seville ended 11 potless years for the east coast club.

The fact that it is their centenary season adds a little extra lustre to their success, but to the long-suffering fans of this massive club, it is what the trophy represents that resonates.

It is the light at the end of a long tunnel, and brings down the curtain on a period of off-field troubles and on-field instability; a period in which they have suffered severe financial problems, been through 13 managers and had to sell off the likes of David Villa, David Silva and Juan Mata in order to balance the books.

All the while, the empty shell of their proposed Nou Mestalla stadium, into which they were supposed to move in 2009, has stood in the city unfinished as a permanent reminder of the club’s stagnation.

Now, finally, there is cause for optimism among the fans. To the huge swathes of Valencia fans who packed into the city’s Plaza del Ayuntamiento to celebrate their Copa victory, the outpouring of joy was all the more fervent for having suffered so much since the glory days of the early 2000s.

For once, there is harmony between the fans, the manager, the players and the board.

The fans and players all stuck by manager Marcelino when his position came under threat after a dismal first half of the season, and sporting director Mateu Alemany ultimately persuaded the owners to hold their fire.

That felt like a turning point for Valencia, and later proved to be just that. In the past, the owner wouldn’t have hesitated to pull the trigger after a poor run of form, but this time they decided to stick with a clearly excellent manager who had just happened to stumble upon a period of bad form and worse fortune.

From then on, Valencia went from strength to strength. They charged up the table from 12th position to end the season in fourth place, unexpectedly qualifying for the Champions League, before landing the Copa del Rey crown against all the odds. The only blot on their copy book in the second half of the season was the capitulation to their English mirror Arsenal in the Europa League semi-finals, but reaching the last four was an excellent achievement in itself.

Now they need use their successful season and their new-found unity as a base to build on. After Arsenal won the 2014 FA Cup, they went on to win two more in quick succession. Once they knew they could win and had shaken the monkey off their back, further success followed. Valencia will be looking to follow this example.

As Spain’s established top three have greater resources and are more attractive to potential transfer targets, it will be difficult for Valencia to gatecrash their exclusive party. But in a year in which each of Barcelona, Real Madrid and Atlético Madrid will go through a period of upheaval of some form, there may never be a better time.

There was significant investment in the squad last season as the likes of Gonçalo Guedes, Geoffrey Kondogbia and Kevin Gameiro were brought in to bolster their ranks, and there’s every chance more spending will follow this summer, with Champions League participation providing the means and the motive for players to join.

But even if there isn’t a great deal of action in the transfer market, Valencia’s current squad – led by their talismanic captain Dani Parejo – is certainly capable of launching a challenge at the top end of the La Liga table.

The new-found positivity at the club and the return to trophy-winning ways are a testament to the power of togetherness. Everyone connected with the club is singing from the same hymn sheet, which has rarely been the case in Valencia’s recent history. Valencia can harness this unity and use their Copa del Rey triumph as a springboard for greater success.