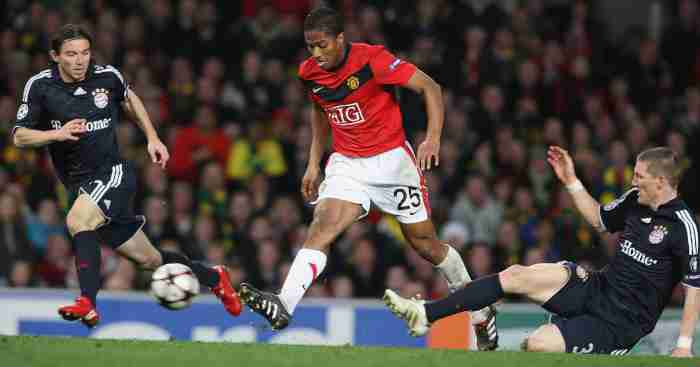 Antonio Valencia has picked his two most memorable moments as he prepares to bring down the curtain on a decade as a Manchester United player.

The club captain will make a rare appearance under Ole Gunnar Solskjaer on Sunday in one final appearance at Old Trafford before he leaves the club upon the expiry of his contract this summer.

Valencia has been unable to make an impact at United this term due to injury issues.

But there have been plenty of times when he has starred down the years, leading him to sweep up at the club’s player of the year awards in 2012 and being named Players’ Player of the Year two years ago.

“I had two moments that stand out,” Valencia said, reflecting on his decade at United.

“The game versus Bayern Munich in the Champions League (in 2010) and in the 20th minute we were 2-0. It was the most memorable atmosphere I experienced as a player. It was spine-tingling and incredible.

“My first piece of silverware with United, Carling Cup 2010, as I had reached the pinnacle of my dreams as a young kid in Ecuador.

“For a whole month my family and friends kept calling me elated with emotion as they had seen my childhood dreams come finally true.”

But the United chapter of Valencia’s footballing story will not be the last.

He is determined to help Ecuador flourish at this summer’s Copa America and believes there is plenty of gas left in the tank.

“I am just concentrated in the Copa America with my nation,” Valencia added.

“The success of my nation is extremely important to me and crucial as it brought me to this world and gave me the platform to whom I am today.

“This is the only thing in my mind after tomorrow’s final game at Old Trafford.

“After this I will sit down with my family and advisors and give the matter thought as I would like to play for a further two, three years.”