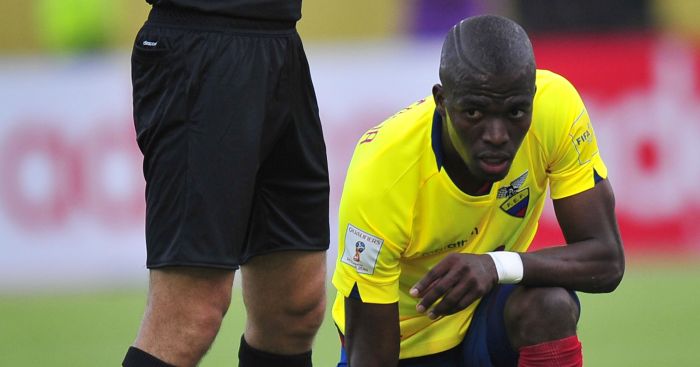 Everton striker Enner Valencia has taken to social media to quash “malicious unfounded comments” over allegations he owes the mother of his daughter £13,500 in child maintenance.

The response comes after a bizarre incident in which he was taken off on a stretcher in the 82nd-minute in Ecuador’s 3-0 victory over Chile, while police chased after him.

The Ecuador international suffered altitude sickness but other reports had suggested that Valencia appeared to feign injury in attempt to escape from the police.

Valencia has now shed some light on the ongoing legal matters between himself and his ex-partner, Sinthyia Pinargote Churo.

In a statement posted on social media, Valencia said: “In relation to the events of the past few days, regarding the alleged breach of my obligations to my daughter Beira Valencia Pinargote, who is five years old, as a result of a series of comments without foundation, I feel the need to make the following clarifications, in order not only to clarify the facts, but to honour the image of my family and myself, both personally and professionally.

Everton’s Enner Valencia chased by police while being carried off on Ecuador duty https://t.co/v6i1jt0nNN pic.twitter.com/395neLYPNL

“Coming from a humble and hardworking family, who since childhood have helped me to face all manner of difficult things that have been present throughout my life, managing to achieve the goals I have, raised from helping my father, selling milk in the streets, to my beginning with Club Sport Emelec, to become a professional player, but above all to be a person guided by God, it has allowed me to develop attributes to form a stable and happy marriage with my wife Sharon and my daughters Beira and Amelia.

“However, I am currently facing several lawsuits initiated by Sinthyia Pinargote Chumo, which I perceive are aimed exclusively on matters of economic and personal gain, such as the demand for maintenance, presented in 2015, where I set the amount of 30,000 dollars a month as alimony.

“Within the last two years, despite spending a sum estimated to a 100,000 US dollars, for pensions of food, which can be verified on the website of the judiciary, she has prevented me strengthening my relationship with my daughter, because her mother prevents me from exercising any contact on my visits when I am in Ecuador.

“After talking with my family, we have made the decision to file a lawsuit, seeking custody of my daughter Beira, aiming for her to come live and study in England, where I live now, so she can grow in a stable environment, with the necessary conditions for her development.

The truth that most people don't know. pic.twitter.com/crqK7bi8FJ

“That application was granted in December 2015, the judiciary bestowing me custody of my daughter Beira, and suspending all alimony monthly payments to Mrs. Sinthyia Pinargorte.

“The court based its decision after proving my daughter was being physically and mentally abused by her mother (whose background shows was already detained by the police before in Esmeraldas, accused of physically abusing another minor) as well as that the amount of money I was monthly paying for alimony (4,820 US dollars – £3,875) were accepted by Mrs Pinargorte at the final hearing.

“Among other facts; it was proven she bought a luxury car, jewellery, constant travels, as well as the fact that my daughter was left abandoned (several times) on her own in Esmeraldas for long periods while her mother was performing her modelling and stripper activities at a gentleman’s night club in Guayaquil.

“Additionally, she was offering adult services online and one of her promotion pictures my daughter can be seeing, innocently standing beside her mother.”