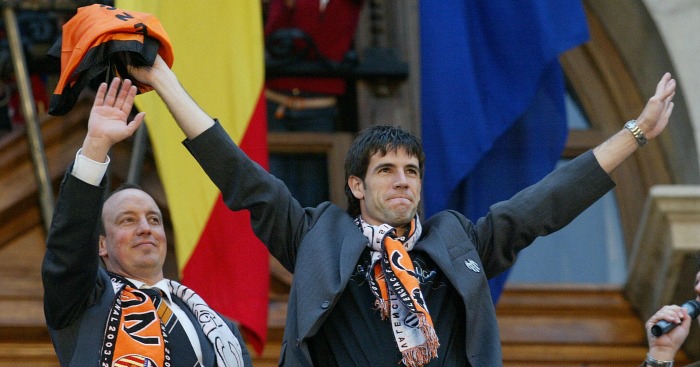 The end of La Liga’s 2003/04 season was truly spectacular. With 12 games remaining, Real Madrid were eight points clear, yet somehow they contrived to lose their final five games and allow Valencia to sneak in to claim the title. Four days earlier, Valencia had beaten Marseille in the UEFA Cup final. This fairy-tale ending capped the most glorious period of the east coast club’s history: two La Liga titles, one Copa del Rey, one Supercopa de España, one UEFA Cup and one UEFA Intertoto Cup in the space of six years.

They were iconic pictures that perfectly encapsulated a club basking in the warm glow of their day in the sun: club captain David Albelda hoisting the UEFA Cup aloft surrounded by his teammates and white confetti; manager Rafael Benítez parading the La Liga trophy around the Mestalla in front of adoring fans. Beautiful scenes and rich reward for a club that hired playing and non-playing personnel smartly. Such halcyon days.

They would be the last.

Over the next decade and more, Valencia lurched from one disaster to the next. In a league with enough basket cases to satisfy a rapacious Spanish media on a par with our own Fleet Street, Los Che managed to surpass the wildest dreams of sensationalist journalists. Since the final day of the 2003/04 season, Valencia have won only two trophies, and one of those was the UEFA Super Cup in 2004 that followed their UEFA Cup triumph of the previous spring.

Last season the club finished 12th and only six points above 18th-placed Rayo Vallecano after flirting with relegation for most of the season. This season paints an all-too familiar tale with the club languishing in 14th. Despite victory over Real Madrid they are 19 points adrift of a Champions League place.

So where did it all go wrong for a club that managed back-to-back Champions League final appearances during one of the most impressive spells in recent European football history?

After Benítez left in the summer of 2004 to join Liverpool, Valencia have had 15 different permanent managers over a 13-year span, plus three additional stints of current manager Voro taking over in a caretaker capacity. There have been five different permanent managers in the last15 months alone; a record that Maurizio Zamparini (president of Palermo and appointer of nine managers in 2016 for those of you not au fait with the Mad Hatter of Serie A) would be sure to look upon with a fond smile and much admiration.

And the ridiculous thing is that they haven’t even appointed a cacophony of sub-par managers since 2004. Among the list of notable Mestalla bosses launched from the ejector seat are Claudio Ranieiri, Quique Sánchez Flores, Ronald Koeman, Unai Emery and, ahem, Gary Neville. Bury’s most famous son (sorry Phil) aside, those managers have gone on to have varying degrees of success at other clubs, not just in Spain but throughout Europe.

Players too have gone on to enjoy their finest years away from the spotlights of Los Che’s decrepit stadium. Where once journeyman footballers or academy graduates followed their feet to enjoy – if even for a fleeting moment – glory and a sense of belonging at a place where they were revered, now the club is a mere stepping stone to better things or a fall-back for those who never quite made it.

During Valencia’s double-winning season of 2003/04, the team picked itself and was a who’s who of La Liga’s finest players: Santiago Cañizares in goal, Roberto Ayala and Carlos Marchena marshalling the defence, Albelda and Rubén Baraja controlling the midfield, Vicente offering width down the flanks and Pablo Aimar pulling the strings in behind striker and Pichichi winner Mista. Albelda was one of a number of players who came through Valencia’s famed cantera; David Navarro, Miguel Angulo, Juan Sánchez and Xisco were just some of the players who graduated to help Valencia achieve and sustain their success during the early 2000s.

Fast-forward five years and, with the club bordering on a return to some degree of success under the relative stability of Emery, prize assets Juan Mata and Davids Silva and Villa were on the cusp of super-stardom. Instead of helping Valencia back onto the top step of the podium, the holy trinity that held the keys to the inner sanctum of domestic and continental success were sold off before they could leave their mark. All left for sizeable fees, and all went on to win titles elsewhere. David Silva was even a cantera alumni.

David Villa, David Silva and Juan Mata back in their Valencia days. What a trio! pic.twitter.com/6sKgaLAR0z

The lack of cantera graduates remaining in the first team continued to plague Valencia, with players not just being sold but moving to direct rivals. Barcelona and Real Madrid have hoovered up anyone promising coming out of Valencia’s academy as the financial power gap widens between La Liga’s top two and the rest.

Barcelona, fresh from acquiring Villa, continued apace with Jordi Alba and Paco Alcácer, whilst Real Madrid took on Isco (after a slight detour via Málaga). Bayern Munich even got in on the act, plucking Juan Bernat to ‘compete’ with David Alaba for the left-back position in Bavaria. The two-fold problem of this strategy was obvious to all save for those that actually made the decisions in the boardroom: not only did it weaken their own team and their chances of success, but also strengthened their opponents. Valencia are clearly capable of building for the future, but success seems to perennially be the day after tomorrow. They needed winners and all they got were cheques.

And so it is we arrive at the crux of the problem: money. Football has perpetually lived in its own paradoxical universe where the outside world can simultaneously have no bearing and yet dramatically alter its landscape. The 2008 financial crisis hit Spain hard, the city of Valencia hardest, and Los Che hardest of all. The club was in the midst of a move from the Mestalla to the Nou Mestalla, a near-€300m venture that would finally allow Valencia to move from their dilapidated home that was no longer fit for purpose and had last seen meaningful renovation before the 1982 World Cup.

As the property bubble around the world burst, so too did Valencia’s. Set to the background of La Liga’s grossly imbalanced TV rights deal, Valencia’s dip in performance on the field affected their financial status, which affected their ability to recruit and specifically retain their best players. Wash, rinse and repeat and you have the makings of a deadly spiral that is very hard to escape.

Here’s an example to highlight the sheer lunacy of the situation that Spain, and in particular Valencia, found itself in as a result of the 2008 crisis: In 2013 Valencia defaulted on a €68m loan, which they had only acquired because the local government acted as the guarantor, so the local government of Valencia took over control of the club. The debt was owed to Spanish bank Bankia, which a year earlier had received a €20bn bail-out by the Spanish government and was now state-run. To top it all, the People’s Party, whose most senior politician was Prime Minister Mariano Rajoy who oversaw the Bankia bail-out, also controlled the Valencian government which had taken control of Los Che. So, in a roundabout way, you have a situation where Valencia owed all this money…to itself?

The club was in disarray. Presidents and managers came and went, financial constraints stalled the construction of the Nou Mestalla and the property prices in Spain fell so low that they were unable to push ahead with plans to sell the old Mestalla ground, which was intended for housing developments. The senior squad and academy continued to be gutted with prize assets stripped and sold off by management, in a doff of the cap to the hedge fund vultures that predicated the Great Recession itself. If you were to write a how-to guide of running a football club from boardroom level, you would carefully study what has happened in the depths of the Mestalla and advise your reader to do the exact opposite in every possible situation.

So with the club on its knees financially due to reported debts of up to €350m, caught in limbo between two stadiums, desperate for success but against the odds making steady steps towards stability with a string of top-four finishes, the club made one final error: they sold their soul to the devil. In August 2014, Peter Lim finalised a controlling stake in the club but the Singaporean businessman had strings attached to one of football’s most ugly bedfellows: Jorge Mendes.

Over the next couple of years, André Gomes, Eliaquim Mangala and Ezequiel Garay all arrived at the Mestalla as direct clients of Gestifute, Mendes’ sports agency company. Others, including João Cancelo, Zakaria Bakkali, Danilo and Enzo Perez, arrived with the suspicion that Mendes’ dirty fingerprints lay all over the fax machine. Gomes was sold last summer to Barcelona to continue the same old depressing trend, and prized centre-back Nicolás Otamendi – another patron of Mendes – the summer before. Mendes even installed his first ever client, Nuno, as manager over the popular Juan Antonio Pizzi before Lim’s takeover was fully complete.

As if to illustrate the brazen control that Mendes exerts over the club, Gomes and young winger Rodrigo arrived in the summers of 2014 and 2015 respectively, on loan. Their deals were both made permanent the following summers, Rodrigo’s for a staggering €30m. Mendes extracted his pound of flesh twice over for the loan and permanent transfer deals and, whilst Gomes was, and is, a very talented player, Rodrigo was someone Valencia massively overpaid for, to benefit one man only.

It paints a very sorry picture for Valencia and the future of the club. They are now nothing more than a pawn in a chess game between the nouveau riche super agents. Players are bought and sold now not because they will enhance the team’s style or make them competitive, but because their agent can make a profit due to unparalleled access. When players are sold, scant consideration is given to who is buying, as Valencia’s direct rivals continue to drain the ever-shrinking talent pool in the Mestalla. Instead, Valencia are chasing the bottom line in a staggering show of short-termism. They are caught in a groundhog day with an ever-dropping glass ceiling of their own making.

The old adage of the candle that burns twice as bright burns half as long seems a fitting epitaph to Valencia’s sorry story. The light has well and truly gone out at the Mestalla, and it’s difficult to see when it will be ignited again..