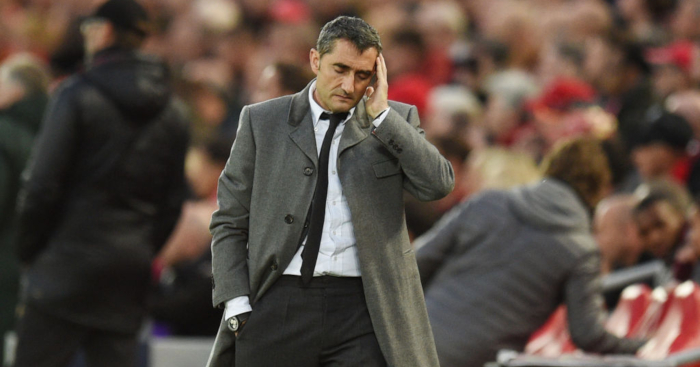 Barcelona coach Ernesto Valverde insists he is not about to “hide under a stone” as his team look to recover from their shock Champions League elimination by Liverpool.

The Spanish giants slumped to a 4-0 defeat at Anfield in the second leg of their semi-final on Tuesday night as the English club overcame a 3-0 deficit to progress against the odds.

With their European campaign now in tatters, the focus has turned to Valverde and the future direction of his team.

Valverde, though, remains defiant as he prepares to pick the players up for Sunday’s penultimate LaLiga fixture against Getafe and then for the Copa del Rey final.

“I feel strong, I’m good. I want to take the next step, I won’t hide under a stone,” Valverde said at a press conference.

“I feel like I’m in ‘The Great Escape’ – they have just caught me and I’m in the punishment cell, I want to play tomorrow’s match.

“After a blow like that, everything wobbles, we know what this show is like, if something like this happens you have to break and burn it all, but then you have to put it all back in its place.”

Valverde insists he has “complete support” of Barcelona president Josep Maria Bartomeu as he aims to move the club forwards.

“We’re hurting, I won’t deny it, we have a responsibility to ourselves and our fans,” Valverde said, as quoted by Marca.

“We can lose a knockout tie, the problem is how we lost it – we weren’t good in the second half. It has been painful, there’s no other option but to look forwards and we have to take the next step.

“The bad outweighs the good because it’s the most recent, the defeat wasn’t 1-0, it was 4-0 and it matters at clubs like this, this group has the ability to excite people.”