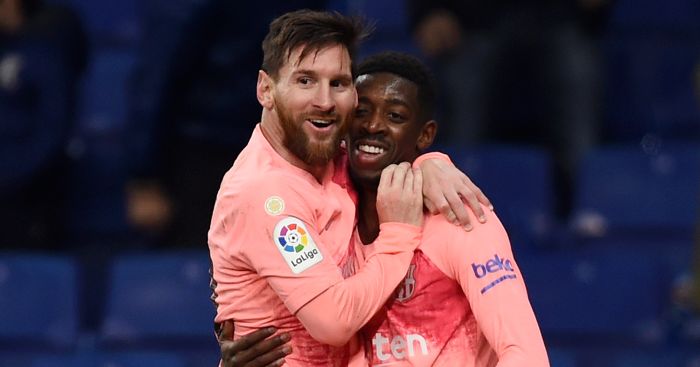 Ernesto Valverde has laughed off reports that Ousmane Dembele arrived at Barcelona training late yet again.

The forward has been linked with moves to Liverpool and Arsenal in recent times with the Gunners’ head of recruitment Sven Mislintat talking him up last week.

Dembele is reportedly unhappy at a club who are convinced he has a gaming addiction but Arturo Vidal has claimed he just “needs love.”

The France international was on form as Barcelona beat Espanyol 4-0 in the derby but it was his discipline that made the headlines again as he reportedly turned up two hours late for training on Monday morning.

Ahead of Barca’s match against Tottenham on Tuesday night, Valverde was asked if he could remember such poor timekeeping from a player, Valverde joked: “It happened to me!

“I knew you were going to ask about Dembele. It’s true that some things have happened, we will try to solve things internally, and there’s not much more to say about this.

“These are questions about an internal matter, he’s a player who gives us a lot of things in the field, but in the same way that others contribute a lot on the pitch. We all have to follow some guidelines here.

“You win the derby 4-0 and everyone says it’ll be relaxing, it’s sunny outside and you hope nothing crazy happens. This is an internal issue, we will resolve it internally, and I’ve said that four times.”